A Newbie’s First Impressions of Dungeons and Dragons

Its neat to introduce someone to something that you love and watch as they form their own opinions about it (so long as they exactly reflect your own, right?!). Below are the first impressions my friend Jeremy Timmerman had with Dungeons and Dragons 5th Edition. He came to the table with absolutely no RPG experience and not knowing exactly what to expect. He brought a pair of fresh eyes to the system. Here is what he loved along with what he didn’t.

Dungeons & Dragons is not the kind of thing I ever thought I’d find myself playing. Not that I think I’m too cool for something like that, but it had just never really interested me.I don’t have a terribly long attention span, and with a wife and two kids, the opportunity to play games of any sort doesn’t really present itself too often.

But when Earth Nerd Adkins invited me to play and insisted that he really wanted me to be part of a campaign with him, I went along with it. If nothing else, it would be a chance to drink beer at Mike’s house and hang out with some friends.

I discovered several things about D&D – and perhaps related games, by extension – and they reflect my mixed feelings about the genre.

What I Enjoyed About My First DnD Experience

Collaboration is forgiving.
One of my biggest concerns about playing D&D was that there isn’t a winner. I’m competitive by 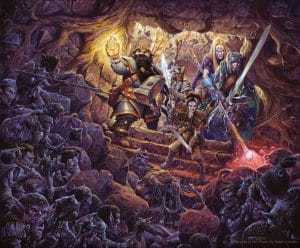 nature, to the point that I helped create the “Warehouse Olympics” at my first job at a hardware store, which included such events as the “Pallet Jack Races” and “Land the Tape Ball on the I-Beam.”

So when I found out that I would not be trying to defeat my fellow players, that was a bit of a setback. But what I quickly discovered was that the collaborative nature allows you to make mistakes that a head-to-head game never would. That came in handy when I inexplicably reversed the meaning of “resistant” in my head and launched a fire bolt at a creature that wasn’t going to take any damage from fire.

Creativity is encouraged.
I’m a writer by trade. As such, it’s kind of silly that I would’ve avoided a game where you literally get to make up everything about your character and then decide how your character reacts to situations.
In the first part of our campaign, that led to my dragon-born barbarian putting on boxing matches with Adkins’ bug-bear fighter just so our characters could get free rooms at taverns. That doesn’t happen in Monopoly, folks, and it was a lot of fun.

RIP Kamal, by the way.

Complexity is my friend. 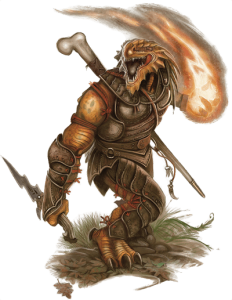 As stated, my first character was a dragon-born barbarian. He was rolled up with some of the most unlucky dice throws you’ll ever see, and it’s really a miracle that he survived as long as he did. And while I initially thought that I would stick with a simple brute-force type character, by the time Kamal bit the dust, I decided I wanted to try something with a few more options.

I was right in that decision. The game was more fun for me with my second character, an elf paladin named Leodis. Figuring out when and how to heal my friends as well as deciding when to use magic was much more fun.

Now for the bad…

The Things I Didn’t Love About D&D

I still wish there was a winner to this game. In full honesty, I was a bit underwhelmed with the ending to the campaign, The Lost Mine of Phandelvar. Yes, I get that we all won and I should feel greatly accomplished having finished such a quest, but I guess I just always expected we would finish it.
Of course, that feeling may have something to do with the fact that Leodis was flat on his back unconscious because I misunderstood the DM’s wording and got attacked by a giant spider in the dark.

This, of course, will vary from group to group, but I felt like the action took too long to develop at times. I’m sitting around waiting on goodness knows how many friends and villains to take their action, which may or may not render whatever I want to do completely useless anyway, and I really want to just hit something with an axe.

That just takes getting used to, I guess.

Coming Back For More 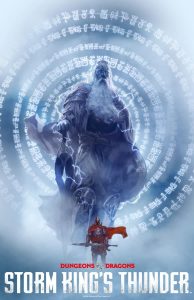 Even with those two complaints, which may seem kind of major, I’m still continuing on to the next adventure. I’ve rolled up a dwarf fighter, which makes no sense the more I think about it given how I just said I liked my more complex character. But that’s what I’m going with. He (Morgran Dangart) will try to survive the perils of Storm King’s Thunder.

I’m not sure which will prove more difficult.

How We Crashed Our Own D&D Party

7 Nerdy Things You Need in Your Life: Timmerman’s…