Fallen Kingdom was a bold choice...

I enjoyed watching Jurassic World in the theaters.  So much so that I caught it on the big screen twice.  It wasn’t perfect (you can read my review here if you’d like), but it was entertaining.  It was fun.

I liked Jurassic World: Fallen Kingdom a good deal less.  I mean, I didn’t leave the theater fully angry or anything, but there were more than a few moments in the movie that elicited huge sighs and eye rolls from me.  But let me start with the great!

I thought Pratt did better in this movie than he did the first, and he was by no means bad in the first.  He went from good to great.  And Bryce Dallas Howard’s Claire was excellent once again.  Isabella Sermon also does a fantastic job as the young Maisie Lockwood.  IMDB says this is her first movie.  Good start, young lady! 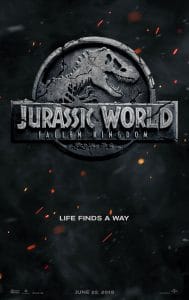 The rest of the cast were…serviceable…but we’re talking about the good here so let’s stay on task.

Easily – hands down – the best thing about Jurassic World: Fallen Kingdom is the sequence during which the indoraptor is after Owen, Claire, and Maisie in the mansion.  Holy wow.  Director JA Bayona brought his horror movie chops to the forefront during that sequence and it is, all by itself, worth the price of admission in my opinion.  Great tension, fantastic use of lighting and sound (the clicking toenail of the indoraptor in particular was a masterful touch).  It was the first time I’ve been wary watching a Jurassic Park movie since…well…Jurassic Park.

It loses its way eventually and switches gears back into action movie mode with sequences that reminded me of Wash smashing his dinosaur toys together on the console of Serenity, but when the horror was emphasized over big action, it was truly great.  Man, oh, man I wish it lived there a little longer.

I also had an interesting thought partway through the film:  It felt very human.  The moral questions surrounding the impending re-extinction of the de-extincted dinosaurs, the political handling of the situation, the commoditization of the dinosaurs (as items as opposed to attractions), and everyone’s (read: my) favorite chaotician, Ian Malcolm, comparing the inevitable abuse of genetic manipulation to various historical abuses like nuclear weapons.  I felt like all of that was accurate to how things would have gone down if we brought dinosaurs back as Hammond did.  I don’t know what that says about us, but there it is.

And lastly, the movie is very pretty.  Even when some element of the plot or a directing decision was grinding my gears, my eyes were happy.  My ears, too…for the most part (see below).

The Not So Great

A lot of Fallen Kingdom felt too derivative of its predecessors in the series.  Elements of the plot, recycled gags and scenes, even the indoraptor itself…When it comes to movies, I personally don’t think the idiom “Imitation is the highest form of flattery” applies.  I get that it works for some folks, but some folks aren’t writing this review, so there!  The closest the writers and directors came to honoring the original JP was the horror scene I mentioned above; not with all the fan-service and somethings-borrowed.  It captured the original’s heart or essence without dressing up just like it. 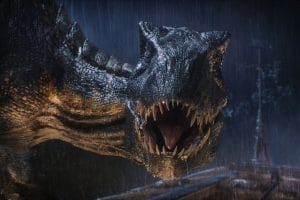 And at what point are we going to take directors to task for dropping serious bass and shaking our screens when large dinosaurs come near…and then somehow allowing them to tiptoe, unheard and unfelt, into other scenes?  To be fair:  This also happened in the first Jurassic Park (when the T-Rex apparently rolled a natty 20 on his stealth check and got Sneak Attack damage on the raptor as it pounced at Sam Neil), and it has happened in at least one of the others (JP3 when the spinosaurous’s footsteps were overshadowed by a ringing satellite phone for a cheap gag), but good Lord I’m tired of it.

And the ending of this movie is…well, its dumb, guys and gals.  Its just dumb.  I can’t say more without spoiling elements of the plot, but the last 10 or so minutes had me seriously frustrated.

All in all I’d give Jurassic World: Fallen Kingdom 5 Nerds out of 10, and the horror sequence alone counted for 3 of those points, easily.  Maybe 4.  Its alright, but you’re safe to pass on it, too.  As the subtitle to this post suggests, I now feel like “fallen kingdom” is kinda ironic.  The Jurassic Park series took an overall dive with this one in my estimation.

Redbox worthy, sure, but if you’re just itching to go to the movie theater this week, just catch Avengers: Infinity War again – I don’t care how many times you’ve seen it.