Here’s what I think:  If you enjoyed any of the original trilogy – even the weak sauce that was JP3 – then you don’t need me to tell you to go see Jurassic World. On the other hand, if the Jurassic Park movies never really scratched your itch (or you had no childhood and ergo no fondness for dinosaurs you sad, sad person), then even if I gave it the most passionately positive review you’d pass on it anyway.

So I’m not going attempt to peddle it either way.  I just thought I might say a thing or two about the cast and a couple of the plot elements, is all.  Ebert or Roeper I am not.

The best castings of the movie were not, in my opinion, the leads.  I like Pratt well enough, but I think BD Wong, Vincent D’Onofrio, and Jake Johnson stole the movie.  Wong in particular was stellar.  There’s a scene in which he is defending his work to Masrani, the park owner, in which Wong shines.  He’s the only returning cast member of the original Jurassic Park; the quiet Asian scientist that watches over the hatchlings, remember?  In World, his character is much, much stronger and prevalent. He kinda had me hating him, which I actually enjoyed.

D’Onofrio did a bang-up job with what I’ll call the “human villain” role.  He strong arms and usurps with the best of them – steered by his hubris, which he carries nicely.

And Jake Johnson only has a bit part, but he is ground zero for most of the humor in the film.  And he gets the chance to be more than the token comic relief.  He gets to play hero a bit!

Easily the weakest dialogue of the whole film takes place between the two brothers, Gray and Zach.  I’ll be honest: Their family drama felt like nothing more than a grab for the heart strings, and it wasn’t really needed in my opinion.  They are two children all alone in a park brimming with things that want to eat them.  Of course we’re going to cheer for them.  We don’t need a dramatic backstory to accomplish as much.  See: Jurassic Park.

Pratt also delivered two lines that seriously made me cringe when he said them.  They just didn’t seem to have the right tone.  When he says “She’s not eating them. She’s hunting for sport.” and “Watch your six.  The raptors have a new alpha.” I groaned out loud.  There’s nothing wrong with those quotes’s contents, just their delivery.

So the driving force of the movie is a single repeated line.  I couldn’t find it on IMDB, so I’ll loosely quote it here: “You wanted something scarier, something cooler, and something with more teeth.”  It debuts in reference to the new dino-baddie, the Indominus Rex.  Apparently park goers have become bored with ho-hum dinosaurs and need something new.  They say it at least once more right before Bryce Dallas Howard’s character unleashes the T-Rex.  But here’s the thing…that line right there is basically the philosophy behind the entire movie.

Think about it.  We saw two Jurassic Park movies with basically the same cast of dinosaurs.  Then the third one promised pterosaurs and the Spinosaurus…because we, as the audience, might otherwise have balked at a third movie without some new stars.  We, too, got bored of the same old dinosaurs.  We needed something scarier, cooler, and with more teeth; the latter bit being true because a movie starring a bunch of leaf eaters would be a tough sell.

On top of that, the climactic battle at the end of the movie pitted not two different types of carnivorous dinos against one another (that had already been done in JP and JP3 – though the latter’s confrontation took place early on so we, as the audience, would know beyond the shadow of a doubt that the Spinosaurus is so much scarier than that wimpy T-Rex that had us shaking in our boots for two films), but four different meat-eating anachronisms. 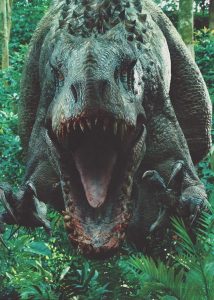 Listen, Universal and Spielberg weren’t wrong.  Jurassic World is a very entertaining watch.  The Indominus is truly frightening due to the
smorgasbord of talent in its hand-crafted DNA, the raptors’ dynamic wth Pratt’s character is downright cool and even gets a little touching at the end, and the scale of potential devastation wrought by rampaging dinosaurs is elevated from a handful of folks to 21,000+.  I know the T-Rex made his way to New York in the second one, but the oh-crap-tons-of-people-are-in-for-reals-trouble factor of World was far superior to that experience.

For what its worth:  I enjoyed Jurassic World and look forward to adding the BluRay to my collection when the time comes.  I think most JP enthusiasts will agree.

Thanks for reading. If you’ve enjoyed Nerds on Earth, please consider spreading the word by using the social media buttons below.

A Quick (And Spoiler Free) Review of Jurassic World: Fallen…