Like most right-thinking humans, I’ve always thought ninjas were the coolest. So I’ve decided to become one. But first I have to train.

[Tosses smoke bomb at your feet.]

In 2015 many claim there is only one man who can legitimately train you as a ninja, and unfortunately, he isn’t accepting new students. 65-year-old Jinichi Kawakami is the 21st head of the Kōga Ban clan, a dynasty of assassin spies who trace their history back 500 years.

Kawakami began his ninjutsu training at the age of 6 and at the age of 19 he inherited his master’s title along with a cache of secret scrolls and ancient tools.

Kawakami climbed walls, leapt from great heights, and learned to dislocate his joints in order to escape from small spaces. He can withstand extreme heat and cold, and disciplined himself to go for days without food or water. He can hear a needle drop a room away, and can disappear in a cloud of smoke. But if evasion proves to be impossible, Kawakami can eviscerate a victim with nothing but a three-inch throwing star.

“The training was all tough and painful. It wasn’t fun but I didn’t think much why I was doing it. Training was made to be part of my life,” he said.

But with no new students, there will be no 22nd head of the Kōga Ban clan. “The art of ninjutsu has no place in the modern age,” says Kawakami.

So unless I can convince Jinichi Kawakami to put his training on YouTube, he will be Japan’s last true ninja.

And that might be OK. Ninjas are destined to live on in comic books, toys, video games, and in the daydreams of 11-year-old boys everywhere. And certainly there would’ve been even more ninja representation in Hollywood than there is already, had it not been for the untimely death of Chris Farley.

Ninja legend will never die.  In fact, Ninja legend has grown and warped, ultimately to include tales of ninjas who could control the elements, walk on water and turn invisible (which only proves that Jesus was indeed a ninja of righteousness).

So let’s look back and see if we can’t trace the history of the true ninja.

The History of the Ninja 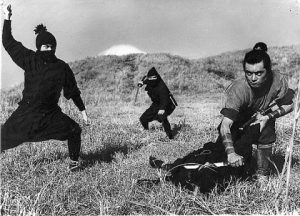 The problem is that despite the folklore, historical accounts of ninja are scarce. This isn’t unexpected. Given the secretive nature of ninjas, it’s logical that we wouldn’t have copious written accounts of their exploits.

Besides, the first ninjas were mostly recruited from the lower class, so very literary interest in them was slim, and instead was focused mainly on the aristocratic samurai. But what we do know about ninjas is wonderfully interesting.

During the 15th century of feudal Japan, the code of the Samurai was still rigidly upheld. The samurai’s code of honor demanded unwavering obedience and existed with a clear sense of ritual and decorum. For example, all fights were considered duels of honor and were expected to be held openly and following a clear back and white rulebook. Unfortunately, the world is never that back and white, so Japan needed operatives who were comfortable working the grey areas. Enter the ninja.

Ninjas aimed to be misbehaving. Ninjas were recruited as spies, arsonists, assassins, raiders, and terrorists, with espionage being the main role of the ninja. Armed with a wardrobe full of disguises, the ninja would gather intelligence from within enemy terrain, and like a modern day hacker, would gather building schematics and secret passwords. 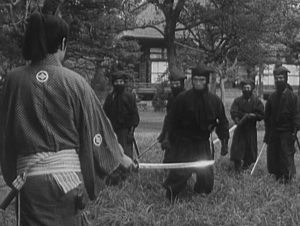 When the infiltrated ninja had gathered what they needed, they might also practice sabotage on their way out, targeting the camp or castle as an arsonist. Often these would be Kunoichi, or female ninja, because they’d never be suspected.

Since peasants rarely traveled far from home, dressing as a peasant was a poor disguise so ninjas would dress as Buddhist priests, entertainers, fortune tellers, merchants, ronin, and monks, as those roles would be seen as plausible travelers and visitors. Of course, if all else failed, ninjas could simply dress in all black with only their eyes visible, and effectively engage in espionage from the shadows. Case in point, there are 19 ninjas hidden in header photo of this article, but you’ll never spot them.

These early 15th century ninjas were mainly hired as mercenaries, and although a ranking was beginning to develop, the ninja families weren’t yet fully organized into larger guilds that would be specific to a territory. But in the remote provinces of Iga and Kōga, those clans were turning pro.

The surrounding mountains gifted these provinces with a remoteness that allowed the ninja’s secretive development. And the ninja from Iga and Kōga weren’t simply peasants hired out as a mercenary, they were professional and full-time ninja, specifically trained for their roles. 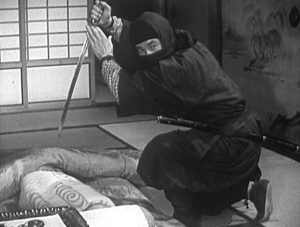 Decades passed and these ninja largely ran amok, impeded only by rightly paranoid potential victims who would construct dwellings to include traps and trip wires attached to alarm bells. Some even took anti-ninja efforts to the extreme by concealing weapons in bathrooms and under floorboards. It pays to look over your shoulder if you suspect a ninja nearby.

Then in the 16th century a samurai warlord by the name of Oda Nobunaga invaded the Iga province. Nobunaga wiped out the organized clans, and survivors were forced to flee, some into the nearby mountains, while others like Hattori Hanzō fled into the territory of the shogun Tokugawa Ieyasu, where they were received with open arms.

Wars and rebellions would plague the countryside in the coming years and ninjas were certainly part of the mix during this period. In fact, it was during this period that the ninja reputation for assassinations grew. The secretive nature of ninjas make it difficult to prove, but deaths of historical figures have certainly been attributed to ninjas.

In fact, ninjas made several attempts on the warlord Oda Nobunaga’s life. A Kōga ninja by the name of Sugitani Zenjubō was hired to assassinate Nobunaga in 1571. Using two early model muzzle-loaded firearms, the ninja fired two consecutive shots at Nobunaga, but was unable to fully punch through Nobunaga’s armor.
Zenjubō was caught four years later and tortured, and Oda Nobunaga continued to be a worthy adversary as several subsequent assassination attempts by ninjas also proved fruitless. Ninja, please. 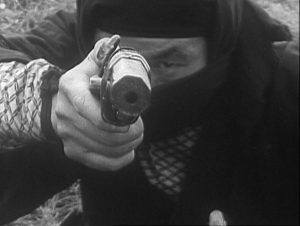 But don’t hate the player, hate the game, as Nobunaga often joined in on the fun himself. Nobunaga sent the ninja Hachisuka Tenzō to assassinate a powerful daimyo. Tenzō hid in the shadow of a tree to avoid being seen under the moonlight, then later evaded capture by concealing himself in a hole he had prepared beforehand.

Fast forward to the 18th century and ninja were being brought together to form Japan’s first secret service and intelligence agencies. These ninja were assigned as bodyguards and secret police, with many disguised as common workers and gardeners to discreetly infiltrate, observe, and protect.

In modern times the skills of the ninja has come to be known as ninjutsu, but earlier they weren’t united under a single discipline, and instead was distributed among a variety of espionage, combat and survival skills. Once specialized training began, ninja were born into the profession, where traditions were kept in house, and passed down through the family, like we see with Jinichi Kawakami, the last true ninja.

A number of ninjutsu manuals were written by descendants of Hattori Hanzō as well as an offshoot of the Hattori, but those clan no longer actively train. Modern schools to train ninjutsu arose in the 1970s, with lineage and authenticity of the schools being highly questionable. Like so many things in our world today, they simply don’t make them like they used to.

Today’s lore revolves around ninja tactics, with strong interest in the weapons and equipment they used. And as mentioned previously, pop culture is sure to keep ninja fever burning. Indeed, the Ninja legacy is alive and well, and announcing its demise simply demonstrates its core principles of stealth and deception. Perhaps its all just an elaborate double bluff. Perhaps the true ninjas are content to hide in the shadows among us, allowing us to consume our video games and comic books, biding their time until they are called on once more.

That would be the most ninja thing ever.

We’ve also looked at the real history of the zombie and the apocalypse. If you’ve enjoyed Nerds on Earth, please help us spread the word, using the social media buttons below. Thanks for reading.

Nerd Culture: Are Ninjas a Worthy Obsession or Just a…