Ninja Gaiden is the sweetest of the sweet when it comes to ninja games. That is, of course, if you’re in to not-at-all-covert ninja action. I’m not going to lie: Running about as Ryu Hayabusa is extremely gratifying, He is the baddest of the bad! Dealing death by way of kusarigiama, tonfa, sword, bō, or several other extremely gratifying WMDs (at least they are in Ryu’s capable hands) is so, so satisfying. And Gaiden earns its M rating easily. Blood, and severed limbs, and decapitations…Oh my. 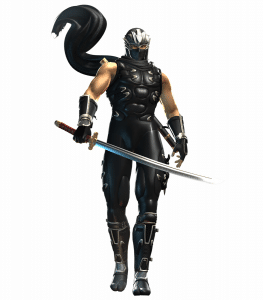 I should be clear, though: Not all Ninja Gaiden games are created equal. In fact, I would caution you to stop short of Ninja Gaiden 3.  It just isn’t quite the hack-n-slash, all-out ninja game of its predecessors. The first two are well worth the ticket price. The third one? Meh.

Ninja Gaiden is not, I repeat not, a ninja game in the strictest sense. The ninja aspect is, above all, a skin; an angle. You can’t skirt danger. You must face it head on. Sure, you have the “traditional” arsenal at your disposal, but stealth is minimized. You run-and-gun, only with swords and such. Not quite the way of the ninja, but extremely gratifying nonetheless. Ninja Gaiden 2 is my most played through game of all time, in fact. 5GS for completing a play through whilst utilizing a single weapon? Yes, please! Well worth it.

Want to go all ninja-Rambo on some baddies?! Ninja Gaiden is the game for you! But beware! It is extremely difficult. “Path of the Warrior?” Child’s play. “Path of the Mentor?” Amaze-balls difficult. I could barely navigate my way through the first level! But that is what sets Ninja Gaiden 2 apart. While you probably shouldn’t play it in the presence of company, it is superbly gratifying to best the next-highest difficulty level.

GameStop currently sells used copies of this game for as little as $4.99. That is one small price to pay to feel like a ninja-tank. Writing this post has got me jonesing to take up the cowl of the Hayabusa Clan’s deadliest once again…

Mark of the Ninja (also rated M, but milder in comparison to Gaiden) is the most ninja of ninja games in my experience. As I’ve stated previously, stealth is the name of the game when it comes to the ninja. Sticking to the shadows, keeping quiet, and remaining undetected are the names of the game.

That said, Mark of the Ninja all but requires you to stick to the shadows to 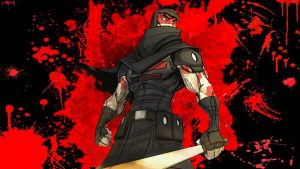 survive. While Ryu runs around in the open and is a veritable bullet sponge, our unnamed (that’s so ninja) ninja protagonist is very nearly a sitting duck if guards are alerted to his presence. So its a lot of tiptoeing around, silent assassinations, and the hiding of bodies.

Mark of the Ninja has some really interesting gameplay dynamics, as well. Silence and darkness are everything, so the game has a fantastic balance of equipping you in such a way as to maximize your efficiency in those elements and punishing you for violating them. No gratuitous head-on encounters here! Like the way of the true ninja, proper play leaves you undetected; nothing more than a susurration in the shadows, a figment of your foes’ imaginations, or the fear-inducing myth that keeps guards wary.

Gameplay favors the creative implementation of your small arsenal of items and skills for progress. Break the lights with your throwing darts to maintain the darkness, toss a noise maker just past a guard to expose his back to your katana, or sneak from hiding place to hiding place and avoid killing almost entirely. But where’s the fun in that?!

$14.99 will place Mark of the Ninja in your gaming library. And although it is relatively short (only 8-10 hours, maybe), I’ve found that it is worth every penny. Sorry, Playstation enthusiasts, but this one is only available through XBOX Live’s Marketplace.

So whether you want to be the Juggernaut of the ninja world or the Cipher, there’s a game for you. Aw heck, go ahead and pick up both for a little less than $25. You’ll thank me later. Well, that is, after you get over the swear-inducing, controller-threatening stretches of Gaiden. But they’re worth it!