Take a Ride on the Wayfarer: A Long Way to a Small, Angry Planet

A few years ago, I started the 100 Page Method to focus my reading habits. I give a book I’m interested in a hundred pages to hook me or lose me—if I’m invested at the hundred-page mark, I finish the book; if I’m not feeling it, I move on. Most books need about fifty pages to show if they’re worth my time, some need more, and a rare few grab me by the end of the first chapter.

Becky Chambers’ The Long Way to A Small, Angry Planet is one of this special breed.

With a followup released in 2017 and the third book in Chambers’ series, Record of a Spaceborn Few, coming later this month, let’s take a gander at Small, Angry Planet. On a Nerds on Earth rating scale, I’d give this little tome 14/10 (would read again), and here’s why.

A Long Way to a Small, Angry Planet 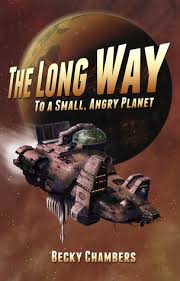 The funny thing about Small, Angry Planet is that nothing much happens. In its 400+ pages, the crew of the Wayfarer welcome a new crew member, land a sweet contract offer for their services, and bungle said job (through no fault of their own, it must be said).

It’s a bracingly light story, light on plot and heavy on character interaction.

In an industry that stacks bookshelves with weighty, Very Important Books, Chambers delivers a breath of fresh air.

Her book is more concerned with entertaining readers than drowning them in grimdark trappings and mopey main characters. My nerdish heart, raised on Star Wars and nourished by videogames, wanted a little action and maybe one or two starfighter battles, but I realized halfway through that Chambers was subverting my expectations in a delightful way.

The part of Small, Angry Planet that garners the most praise on the internet are the characters. Whether it’s the striking, reptilian pilot Sissix, the kooky ship tech Kizzy, the sullen algaeist Corbin, or the Sianat Pair Ohan (the less said about them, the better), Chambers has crammed the good ship Wayfarer with a fascinating cast of misfits and heroes.

They’re intriguing on the surface and only grow more so as the journey to Hedra Ka (the titular angry and small planet) begins. The best part about Ashby, Jenks, Dr. Chef, and all the rest is that they’re quirky and weird and a little off, just like real people: they don’t give their secrets away immediately, nor are they explained in chapters of dense prose.

Did I use the word delightful already?

This builds on my first two points, but Becky Chambers excels at worldbuilding in her debut novel—so much so that it’s kind of frightening. But not in some pessimistic, pitch black way, and not in a ham-fisted, “LoOk At HoW #EXTR3M3 i Am” way, either.

Like Star Wars at its best moments, Chambers has her characters mention important characters, historical events, and social institutions in passing, and leaves them for readers to piece together.

Think of it like this: we don’t go around talking about global warming, political elections, or cultural shifts in everyday conversation like some RPG NPC, so why would we expect the denizens of the Galactic Commons to behave any differently?

There are tons of ways to interpret Small, Angry Planet. It reads as a pacifist protest against arms dealers and humanity’s reflexive resort to violence; as a primer on inclusivity, tolerance, and cultural bias; as proof that acceptance of people that aren’t like you isn’t some SJW propaganda or liberal values conspiracy theory but just being a good person (it also reads as a kickass apologia for space exploration and quantum physics).

But maybe the most delightful thing about this book is that Chambers never hammers readers with these themes—she respects her audience’s intelligence enough to trust that they’ll pick up on the important bits. It’s also possible to read the book as simply a ripping space yarn.

If you need a break from the absurd reality that 2018 has become—and let’s face it, we all need a breather sometimes—you could do a lot worse than spending a weekend enjoying one of the best and most positive space operas to debut in the past ten years. The Long Way to a Small, Angry Planet gets the NoE Seal of Approval! Get it here.

EDIT: I just read that Becky Chambers will be releasing two new solarpunk novellas starting in 2020! The more Chambers the world gets, the better.

My 7 Most Anticipated GenCon 2018 Board Game Releases