In 2015, Cubicle 7 released an updated core rulebook of their award winning Doctor Who Roleplaying Game. The new volume did little to change the core concept of the game, but it did reflect the changeover to the Twelfth Doctor, portrayed by Peter Capaldi. Formerly known as Doctor Who: Adventures in Time & Space, the game also changed its name to the less clunky and more to the point Doctor Who Roleplaying Game.

Since then, Cubicle 7 has released several supplements to the game that players and gamemasters alike can use to bring more options to their tabletop gaming experience. All of these can be purchased directly through Cubicle 7 or from your friendly local gaming store (FLGS).

Let’s take a look at these recent additions to best roleplaying game this side of Gallifrey.

Gamemasters will find helpful content such as advice on how to start off a new game, how to build adventures, and how to create strange and exotic creatures for players to encounter. While seasoned gamemasters for other systems might scoff at the idea of buying a book that offers a bulk of material aimed at providing fluffy guidance to gamemasters rather than crunchy details on the mechanical aspects of the game, the Gamemaster’s Companion is a great read for beginner GMs for any tabletop game who may view the task of being the head of a table a little daunting.

Also included are three adventures, with everything a GM would need to run the adventures, including potential hooks to continue the fun beyond the written page. 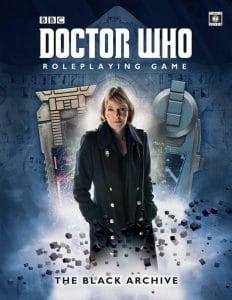 The United Nations Intelligence Taskforce, or UNIT, has always been one of my favorite supporting elements of Doctor Who. First introduced during Patrick Troughton’s Second Doctor serial “The Invasion,” UNIT became a major part of the Jon Pertwee’s tenure as the Third Doctor (coincidentally, my favorite Doctor!). The modern Doctor Who series has called back to the popular organization, tasked with dealing with extraterrestrial and anomalies to the Earth. Within the mythology of the show, UNIT keeps a secret vault of alien technology safely tucked away in the Tower of London.

Published in 2017, The Black Archive gives players the opportunity to open up these secret vaults of strange aliens and wondrous technology for roleplayers to plunder. The book outlines the history of the Black Archive and acts as a companion to the 2012 sourcebook Defending the Earth: The UNIT Sourcebook. Cataloguing gadgets, weapons, armor, vehicles, and other curiosities, the book gives players plenty of unusual content to play with in their travels.

Descriptions of the various items and curios in the Black Archive give gamemasters potential seeds for adventures, while most gadgets come with new good and bad traits, essential to fleshing out characters in gameplay. The Black Archive provides an interesting mix of mythos and mechanics to the game.

The Paternoster Gang and Victorian Era adventuring are laid out in the 2016 book Paternoster Investigations. The Silurian Madame Vastra, human Jenny Flint, and the surly Sontaran Strax makeup the Victorian investigative team known as the Paternoster Gang. First introduced in 2011, the gang has made five official televised appearances on Doctor Who, with additional appearances in a couple of the popular Doctor Who audio adventures as well. Their chemistry, wit, and charm made them quick fan favorites.

The Paternoster Investigations sourcebook gives a detailed introduction to the Victorian Age and a guide to London of the time period. Packed full of historical and fictional tidbits about the time, the sourcebook gives players plenty of information to do something unexpected in a roleplaying game based on time travel and exploring space: a set location to explore! It also gives players rules on how to create their own investigative team, while also providing character sheets for Madame Vastra, Jenny, and Strax.

Fans of Classic Doctor Who will also find character sheets for popular supporting characters Jago and Litefoot. The book includes a single adventure, A Study in Flux, for players to begin their adventures in the 19th Century.

3 All the Strange, Strange Creatures Volume I

This one is almost exclusively for gamemasters. Most of the Doctor Who Sourcebooks come with a bevy of creature stats, but this is the first book specifically dedicated to being a monster manual for the Doctor Who Roleplaying Game. There was a box set, Aliens and Creatures, released in 2010, but it has been out of print for several years. With the release of the updated rulebook in 2015 came a need for a new collection of creatures for players to face off against.

Much of the book covers the various aliens and creatures that populate the Doctor Who Universe. All the classics are there, from the Daleks to the Cybermen. There seems to be a heavy focus on modern Who baddies. Classic Who fans looking for “deep cuts” in a creature compendium will have to get the individual Doctor sourcebooks to satisfy their old school kicks.

There’s also a section included for creating your own aliens. Whether heroes or villains, there are plenty of options for making your own aliens standout in the Whoverse. This was also billed as Volume I, so presumably a second volume is in the works, though Cubicle 7 has been oddly quiet about it.

4 The Silurian Age: Dinosaurs and Spaceships

The Silurians might seem like an odd choice for the sourcebook spotlight, but Matt Smith’s Eleventh Doctor makes the best case for such a book concept with is excited proclamation during the episode of the same name, “Dinosaurs! On a Spaceship!” The scaly villains landed their own book in 2016, featuring a mix of information on prehistory, the Silurians themselves, spaceships,and an adventure to boot. This funky addition to the Doctor Who RPG has a little bit of everything.

Much like the Paternoster Investigations sourcebook, The Silurian Age gives players a rundown of what to expect when adventuring in prehistory. But as any fan of the show can tell you, the Silurians aren’t content to stick to the prehistoric age, and like Madame Vastra, not all Silurians are evil or plotting to take over the Earth once again.

The Spaceship section of the book adds more mechanical details and advice to using a spaceship. Not every group will be lucky enough to swing around time and space in a fancy TARDIS. This book greatly expands player options when it comes to traversing the stars. There’s also a Silurian and UNIT themed adventure included called Asteroid Day that will put characters in a race against the clock to save Earth from being smashed by an asteroid.

5 All of Time and Space Volume I

The four adventures included are (with brief descriptions):

Each of these adventures includes everything you need to play, like monster statistics, advice for playing NPCs, and questions to consider in the aftermath of each adventure. Like All the Strange, Strange Creatures, this volume was labeled as the first, but no further volumes have been announced.

“I am an idiot, with a box and a screwdriver.”

There you have it, a quick rundown of all six Doctor Who Roleplaying Game supplements released since 2015. No matter which of these books players pick up, they all add something unique to the Doctor Who roleplaying experience.

If you haven’t tried this gaming system out, I highly recommend it for anyone curious. It’s a simple 2d6 system that focuses on roleplaying over roll-playing and finding creative solutions over resorting to murder hobo habits. Happy gaming!

Take a Ride on the Wayfarer: A Long Way to a Small, Angry Planet

7 Tabletop Rumors (That are Totally True!)

Capture the Stranger Things Vibe with the brand new Kids on…