Big Finish: Quality Audio Adventures- From Doctor Who to Pathfinder

From 1990 to early 2005, Doctor Who was off the air. During this time, often called the “Wilderness Years”, no new Doctor Who stories, apart from the 1996 TV Movie, were made—at least, no new official BBC ones. It was during the Wilderness Years that Doctor Who expanded into all kinds of other areas that it had previously had little presence in. For the first time, there were licensed original novels in the form of Virgin Books’ Doctor Who: The New Adventures and The Missing Adventures series. Various small production companies began making Doctor Who-inspired fan productions. And there was a whole lot more.

Amidst all this, a small company called Big Finish appeared. When Virgin Books’ license for Doctor Who expired in the mid-90’s, they continued The New Adventures series with the character of Bernice Summerfield, one of the seventh Doctor’s companions who had become extremely popular with readers. Big Finish then acquired a license to adapt Bernice’s adventures as audio productions and in 1998, the first of these, “Oh No It Isn’t!” starring Lisa Bowerman as Bernice, arrived.

Not long after, Big Finish scored the license to produce full-fledged Doctor Who audio adventures. These began with “The Sirens of Time”, released in July 1999. This was a multi-Doctor adventure with the fifth, sixth, and seventh Doctors—played by their original television actors, Peter Davison, Colin Baker, and Sylvester McCoy. Further adventures were then released once per month. Each adventure starred one of the fifth, sixth, and seventh Doctors, along with companions (also played by their original actors) from their respective eras. These audios quickly gained popularity among Doctor Who fans. 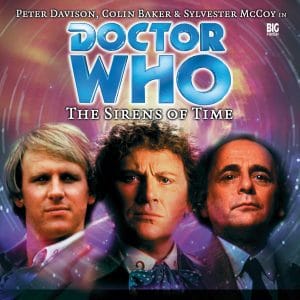 In 2001, Paul McGann reprised his role of the eighth Doctor in a series of adventures that began with “Storm Warning”. Since then, Big Finish’s productions have expanded to include fourth Doctor Tom Baker, as well as virtually every companion to have appeared on the classic series.

Until 2015, their license only included the classic series (everything up to the eighth Doctor), but more recently, it has expanded to include everything up to the end of the 11th Doctor’s time. Since then, David Tennant has reprised his role as the 10th Doctor, along with Catherine Tate as Donna Noble, and other new series characters, like River Song have appeared in their own stories as well. To date, Christopher Eccleston and Matt Smith are the only living Doctors to have not appeared in a Big Finish audio. (Peter Capaldi hasn’t either, but Big Finish’s license does not currently included the 12th Doctor’s time.)

Big Finish’s productions are generally full-cast audio plays, although they also produce some audio books as well. The Companion Chronicles is a series that presents stories narrated through the eyes of the Doctor’s Companions. This has allowed for stories involving the first three Doctors, William Hartnell, Patrick Troughton, and Jon Pertwee, who are all sadly no longer with us.

One of the greatest things about Big Finish’s adventures is that they have allowed for exploration of areas or eras of Doctor Who that have been under-represented or cut short. Paul McGann only had one television appearance. Big Finish has allowed his Doctor to have had as rich a history as all the other Doctors. This is similarly true for Colin Baker, whose time as the sixth Doctor ended abruptly. Indeed, many people who disliked Colin Baker’s time on the television series have come to love his Doctor through Big Finish. 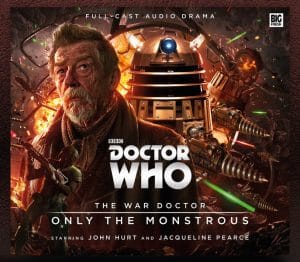 However, perhaps most notable of these, due to the sad news of his death, is John Hurt as the War Doctor. John Hurt first appeared on the TV series briefly in the cliff-hanger ending of the story, “The Name of the Doctor”. He then guest-starred fully in the 50th-anniversary episode, “Day of the Doctor”, where his Doctor was revealed to be a previously unknown incarnation who fought in the Time War, between the 8th and 9th Doctors. John Hurt returned to the role of the War Doctor in 2015 in a collection of adventures from Big Finish called “Only the Monstrous”. Another collection of adventures featuring John Hurt, “Infernal Devices” was released in February 2016, and a third, “Agents of Chaos” will be released in February 2017.

But while Big Finish may have started with Doctor Who, they haven’t been limited to it. As their popularity and reputation for quality adventures grew, they expanded into other popular science fiction and fantasy. These have included Stargate and Highlander (although these two are no longer available due to the license expiring), as well as Torchwood , The Prisoner , The Avengers (the cult British spy-fi series), Blake’s 7 , and more. 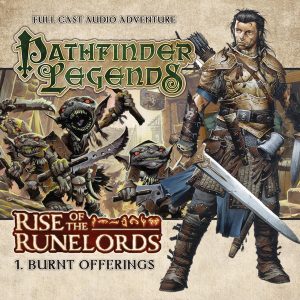 They are not even limited to television properties. For roleplaying game fans (particularly Pathfinder fans), in 2014, Big Finish began Pathfinder Legends . These are full-cast audio productions of Pathfinder Adventure Paths. To date they have adapted “Rise of the Runelords” and “Mummy’s Mask”, and the first volume of “Curse of the Crimson Throne” has just been released.

Big Finish’s library is far too big for me to do it justice in this short article, so you should check out their website to see what they have to offer. There are hundreds of hours of material to keep you entertained.

Did Hamilton the Musical Write the Script for Captain America: Civil War?

Netflix’s Spectral and what it means for nerd movies