Did Hamilton the Musical Write the Script for Captain America: Civil War?

Geez, this sounds like a snoozer of an article, doesn’t it? Just keep in mind that we got to see Iron Man and Captain America punch each other on a big screen, so it’s not all bad.

Did Hamilton the Musical Flip the Script for Captain America: Civil War?

Politics are often presented through pop culture, like it or not, but it’s hard to complain if the movie is as fresh as Captain America: Civil War or the musical as hype as Hamilton. Indeed, commenters began pointing out the echoes of Hamilton as early as the first Civil War teaser trailer. But first, some nitty-gritty history.

Between the years 1787-1789, statesmen like James Madison and Alexander Hamilton supported the proposed Constitution of the United States and were called Federalists. They published The Federalist Papers, which documented the tenets of this early federalist movement in an effort to promote the proposed Constitution and push it toward adoption. This is all covered impressively in Hamilton the musical, but I can’t get tickets to that. We’ll have to listen.

The Federalist Papers were written because the authors believed in a strong central government. Inspired by philosopher Thomas Hobbes, the Federalists aligned lockstep with the Hobbesian view of a social need for government. This view argues that the only way to secure a civil and just society is through willing submission to a set of checks and balances, which would provide a counter-balance to the self-centered nature of human beings. Acountability for the greater good, in other words.

What does that say about Captain America: Civil War? Particularly, as Captain America represents not just perfect teeth, but also what most of us see as pure and perfect American ideology, then what does it say about how we currently view our federal govementment? Is Cap a Federalist, in other words?

Told you. It’s a snoozer of an article. But stick with me because Captain America and Iron Man punched each other in the face. 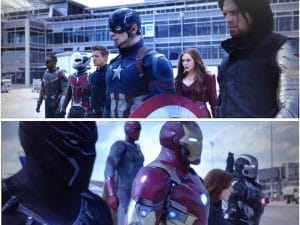 If you can’t fully recall the movie, Captain America: Civil War begins with some nice explosions and punch ’em ups, then quickly begins to focus on the Sokovia Accords, which is an international agreement to provide oversight and accountability to superpowered individuals. A set of checks and balances, in other words.

The Sokovia Accords splits the Avengers into two groups. Iron Man and his allies sign the Accords, hoping it will preserve trust among the world’s population, who has begun to see the Avengers as dangerous because of heavy civilian casualties. General Ross, in speaking of the danger of superpowered individuals and the need for accountability: “If I lost a 30 megaton nuclear bomb, there would be consequences.”

But Captain America and his allies are adamant that sacrificing their freedom to the government creates bureaucracy or potential corruption that could undermine their ability to protect the people who needed them.

Let’s cut to brass tacks. Team Tony could be seen to represent the Federalist belief that a strong central government is essential to preserving the trust and the will of the people. Captain America, on the other hand, represents other figures of American history.

So far, ho-hum. But, twist! Indeed, just as physics teaches us that every action must have an equal and opposite reaction, there were Anti-Federalists in 1786, who were led by Patrick Henry of Virginia and Aaron Burr of New Jersey, among others, and they published their own papers, the appropriately named The Anti-Federalist Papers. The Anti-Federalists wanted more power to the states as they feared that the presidency would drift into a monarchy.

The Anti-Federalists argued that when people lost any freedoms, it allowed the government to be masters of the people. Captain America says to Tony, “If we surrender, we give up our right to choose.” The Anti-Federalists rejected any idea in which individuals lost their voices.

Tony attempted to reason the importance of the governmental accountability and oversight, also echoing the words of ‘ole Thomas Hobbes, Alexander Hamilton, and the other Federalists. Tony’s rationale resonated so well with these early Federalist ideals that one would certainly think this part of history was included in the writer’s research as the screenplay was being written. At the very least, the writers must have listened to Hamilton the Musical or something. 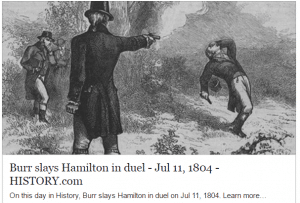 History shows that Alexander Hamilton responded to the Anti-Federalist arguments, offering assurances that the new nation described by the Constitution would indeed fully represent individuals despite its size and centralized structure. (Think: Individual voting, First Amendment, Bill of Rights, etc.) But says Tony, “If we can’t accept [some limitations], we’re no better than the bad guys.”

While there weren’t any pistol duels, there was some popcorn-worthy punching in the movie, and I’m thankful for that. In fact, Alexander Hamilton and James Madison predicted this conflict way back in 1787. In Federalist Paper #10 they wrote that “human passions, have, in turn, divided mankind into parties, inflamed them with mutual animosity, and rendered them much more disposed to vex and oppress each other than to co-operate for their common good.” Called it, right there, they did. 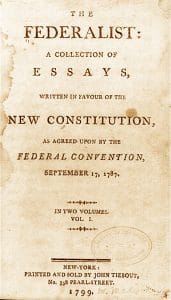 Today, we are no longer as aligned with Alexander Hamilton, James Madison, and the other Federalists as we thought. After all, Captain America: Civil War was a Captain America movie and not an Iron Man movie. This is significant. Had it been the name ‘Iron Man’ on the movie poster, the de facto hero of the story would have been Tony. But it being a Captain America movie implicitly grants a bias toward Cap, positioning Captain America on the “right” side. Binaries of good-bad are just the way narratives work in movies. At least Tony Stark wasn’t shot by Aaron Burr.

Indeed, American history (and present demographics) clearly illustrate that different states have different needs. Anyone who has been to both West Virginia and California will tell you that those are two entirely different cultures. And those are only two of the 50 states.

Much like loosely confederated states with their Anti-Federalist agenda due to their own unique motivations, the superhero community had no formal structure other than coming together when aliens invaded. But the goal of those signing the Accords was to submit to a set of norms that gave them accountability outside of their individual interests.

Cap went Anti-Federalist, saying that individuals (states in terms of history; superheroes in terms of the movie) needed to have full autonomy. Again, the fact that Captain America had his name on the movie poster (and the fact that his character is designed to embody America idealism) made this the through-line narrative.

Further, the story beat that Bucky was brainwashed by Russia (the Cold War subplots feel crazy relevant to current events, do they not?) was meant to serve as proof that Captain America was right. Only by going against the world’s governments was Captain America able to come at the truth. Fighting against political authority is a time-honored, audience-pleasing Hollywood trope, after all. Alexander Hamilton and the Federalists would be so sad right now.

[As a side note, the comic version had Tony set up a 50 state Initiative where each state had their own superhero team. This would have pleased the Federalists, who believed strongly in a centralized accountability, while also pleasing the Anti-Federalists, as it could give individual states more direct contact with their own superheroes.]

The movie shaped up with a narrative that positioned the heroic individual versus the heroic institution. Tony was willing to give up a little of his personal freedom in order to keep the team together and to maintain the optics of the Avengers as heroes in the eyes of the public. Cap was willing to punch others in order not to do that.

Interestingly, the comics ended with Cap surrendering as he recognized that the greater good and the safety of the public was more important than his ideological beliefs. But the movie ended with Cap doubling down on his belief in the individual. “[Individuals] haven’t let [him] down yet,” he says, a “Stark” contrast as us viewers have seen two Captain America movies in a row where governments have let Cap down.

There are no heroic governments or institutions, only heroic individuals, the movie and Captain America seems to say. Ironically, it was written in The Federalist Papers that “if men were angels, no government would be necessary.” Again, Alexander Hamilton would be so sad right now, but none of that matters because Anti-Federalist Aaron Burr shot him dead.

But good gravy, it’s just a movie! And we watched it mainly to see Spider-Man return to the Marvel fold. Still, it’s interesting to see how our beloved movie franchises interact with history and the lofty ideals of Alexander Hamilton, who had a sincere belief that we are better united together than we are as individuals.

Is This Nerdy?, Pt. 2 – Calculator Watches

Big Finish: Quality Audio Adventures- From Doctor Who to Pathfinder