What makes Captain America: Civil War so interesting is that it features two individual heroes with very defined–yet veeerrrry different–ethical frameworks. It’s a story of two very good people who can fundamentally disagree to a point that they punch each other. Hard.

Captain America: Civil War isn’t like Alien vs. Predator where you don’t care which of the bad guys win because, you know, it’s an alien fighting a predator. It’s more like Turner turning against Hooch. How could a friendship so pure and perfect ever turn adversarial?!!?

The ethical frameworks of the two characters–Captain America and Iron Man–have been portrayed very consistently in their decades of comic book stories. Story beat to story beat, they’ve stayed true to character.

What’s even more interesting is their ethical frameworks trace back to the halcyon days of Greek philosophy, ethics first pondered deeply by the giants themselves: Plato, Socrates, and Aristotle. Listen, I’m not saying you need to wear a toga as you read this article, but I wouldn’t advise against it.

Let’s get to it. Here are the two popular systems of ethics that frame the decisions of Tony Stark and Steve Rogers:

While we see these ethics play out in each hero’s solo books, it’s through their interactions (and especially their conflicts) within the Avengers team that they best illustrate their different ethical approaches.

In case you haven’t figured it out, Tony Stark is deeply utilitarian. As soon as Tony realized that passage of the Superhero Registration Act (nee: Sokovia Accords), a law requiring all superheroes to register with the government, was inevitable, he tried to get in front of it so he could at least make sure it was implemented his way.

Tony’s reason for the Avengers signing the Sokovia Accords is harsh, but it makes some sense. More, it’s hard to doubt Tony’s sincere motivation to make things better. And rarely can things be made better without breaking some rules or creating some negative consequences, a utilitarian might reason. 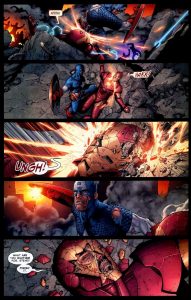 Utilitarianism–Tony Stark’s basic ethical system–judges actions based by the goodness (“utility”) of their consequences. An action that creates more good than bad in the world is ethical, they reason, and the action that creates most good compared to bad is the most ethical (or required). They are looking for the BEST choice in a situation.

However utility or goodness is measured, utilitarianism is based on the common-sense notion that outcomes matter and are important to factor in. In the movie the images of collateral damage from Scarlet Witch’s actions, the fall of helicarriors, and rampages of Hulks weigh heavily on the conscience of a utilitarian like Tony Stark, whose brain is rolling through potential solutions to mitigate those types of negative consequences in the future.

While the concept of utilitarianism is very simple, in practice it can become very complicated because measuring the utility of a wide variety of options is incredibly difficult! In order to evaluate and compare the goodness of different courses of action, a person must trace out all the effects of each choice in order to determine the best choice of action.

Of course, Tony Stark regards himself as a futurist, uniquely able to see the results of any event. “Let me tell you how this will play out…” are words you can almost hear in the voice of Robert Downey, Jr.

But when it comes to monumental decisions like exiling the Hulk or supporting superhero registration, the countless and complex ramifications are impossible to know and therefore impossible to full measure and compare.

As we have seen in decades of comics, Tony can get things wrong. So even a self-styled futurist can make mistakes. And since his decisions are only as good as his predictions, Tony’s inability to always account for the results of all actions sets him up as a target for the hindsight snipes from armchair quarterbacks.

Cap on the other hand is a shining, shield-bearing example of deontology, which judges the morality of actions according to general principles or duties rather than consequences. The conflict between deontology and utilitarianism is often put in terms of the “RIGHT” and the “BEST“, in which the best are outcomes to be maximized while the right is something to be adhered to.

In other words, Tony is looking for the BEST action, while Steve is trying to determine the RIGHT thing to do.

When deontologists (like Cap) judge utilitarians (like Tony) for letting “the ends justify the means,” they are implying that certain means to an end should never be taken, regardless of how good the consequences would be, and there is no compromising on that.

So in a movie scene that was ripped straight from the comics, Cap says you plant yourself like a tree and you tell others to move, he’s saying that once you determine what is RIGHT you stick to that and live with the negative consequences.

A deontologists would have the position that no matter how worthy an end–even saving lives–some measures would not be taken as a matter of principle.

A famous thought experiment in this regard is this question: “If someone could travel back in time, would murdering Hitler as a child be the ethical thing to do, because in doing so, you’d save millions of lives?” 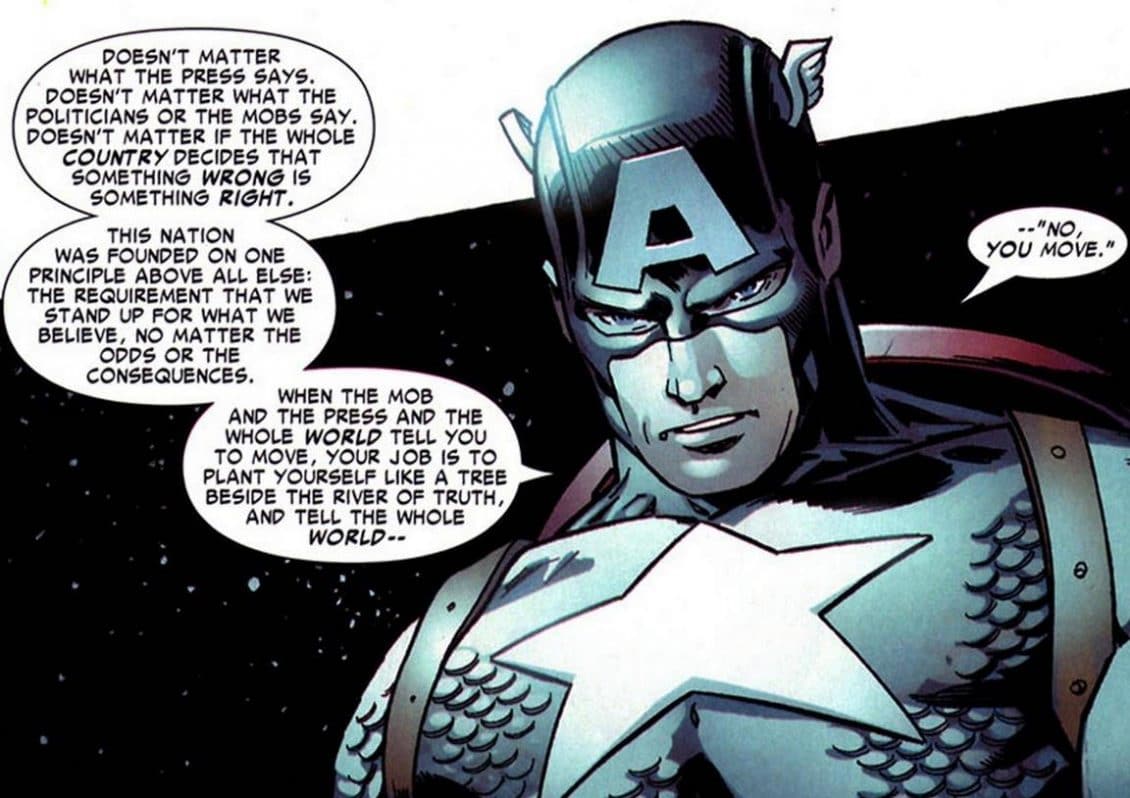 One advantage that deontology seems to have over utilitarianism is that it doesn’t require us to calculate and compare the good and bad consequences of every decision. Cap wouldn’t work out the pros and cons of the above Hitler thought experiment, because murder is wrong, so we’ll just have to live with the consequences of that decision.

But this neglects the complexity of distinguishing right from wrong. When Cap says something to Tony like, “what’s right is right”, his simple languages obscures the fact that a tremendous amount of deliberation and judgement goes into determining what is right in any given situation.

But unlike a utilitarian who would make that decision based upon potential negative or positives effects or the decision, the deontologist weighs various principles and duties against each other.

This is clearly illustrated in the movie. Cap’s principle is that you stick with your friends and they deserve second chances. But another principle would be that you tell your friends the truth. Cap weighed these principles against one another when he decided to protect Bucky and not tell Tony that it was Bucky who murdered his parents.

(An aside: It is interesting that the Black Widow switched from Tony’s side to Cap’s side. Natasha has thrived/survived because she makes the “best” decision in the moment, but has struggled with self-doubt about if all those decisions were the “right” thing to do.)

Furthermore, deontology avoids the contingent nature of utilitarian ethics, by which a change in circumstances can flip a moral judgement one way or the other. Cap was planted like tree, determined to protect Bucky, despite the fact that it was under the circumstances that he was the murderer of Tony’s parents. To a deontologist, though, RIGHT and wrong do not depend on circumstances but on principle.

On the other hand, Tony if often criticized for flip-flopping in his decisions (or criticized post-event for the outcomes of the decision). But changing one’s positions is admirable from a utilitarian point of view. In Tony’s mind, he is adjusting to circumstances and data, doing the BEST he can with the cards he is dealt, even as the cards changed.

Then two very good and very sincere men who were simply reasoning the way they knew how to ending up in a tough situation where they punched each other. Hard.