1.  Feast your eyes upon the SDCC exclusive TMNT short from Jhonen Vasquez.

I saw this video pop up on several sites this week in the wake of SDCC.  Vasquez is a comic book creator and cartoonist (perhaps best known for Nickelodeon’s Invader Zim), and brings a sharp look and a lot of fun and laughs to an escalating beef between Raphael and Donatello.  Definitely worth the 6 minutes – even if you’re not a diehard TMNT fan like myself. 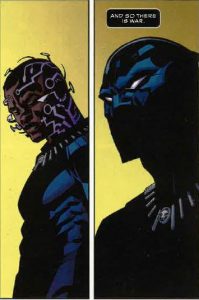 This is great and exciting news to us Earth Nerds, as we are big fans of Coates’ run in the comic thus far.  Jason was rightfully excited about it prelaunch and I gave it my official thumbs up after #1 dropped.  You definitely need to be reading this comic!

This might actually be one of my favorite things to come out of Comic Con.  I particularly love what director Ryan Coogler had to say about his understanding of the titular hero:

What’s so great about Panther is he’s a superhero who, if you grab him and ask him if he’s a superhero, he’ll tell you, ‘No.’ He sees himself as a politician, as a leader in his country. It just so happens that the country is a warrior-based nation where the leaders have to be warriors, as well, so sometimes he has to go fight. I think starting at that is really so interesting.

3.  Major celebrities are playing DnD, and invite you to give it a go!

All of these celebs are throwing around their d20s when they’re not in front of or behind a camera.  And that is just the six named in the first paragraph.  More than a half dozen other writers, directors, actors/actresses, and comics own the habit in this article and highlight its creative merits.

Its not just for nerds!  Quick thinking, creative writing, art, and even acting are all skills sharpened by the RPG.  If you’re not yet playing, we’ve got a ton of posts designed to plug you in whether you’re a PC (someone who will play through the adventure) or the DM (the dungeon master; he or she who will orchestrate the narrative of the adventure).

Via The Hollywood Reporter

I cannot wait to play test this with some long distance friends!  This is something we have been absolutely desperate for, and we know we’re not alone.  Roll20 has continued to improve across the board, and with the officially licensed Dungeons and Dragons adventures integrated into their system, we might finally have a reliable and worthy way of teaming up from our respectful corners of the globe to go on an adventure!

Gary Gygax, the mastermind behind DnD and the original DM, is celebrated on his birthday every year 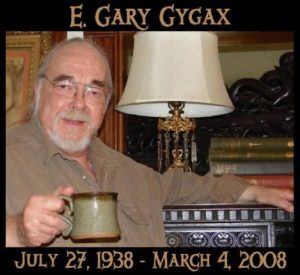 – July 27th.  Though he passed away in 2008, his legacy carries on undaunted – and even continues to strengthen and grow!

Maybe you missed out on celebrating Gary Gygax Day this year.  Why not do so belatedly?  If thats good enough for a birthday, why not for Gary Gygax Day?

Break out a d30 (or 1d20 and 1d10), give it/them a roll, and peep the linked chart to see how you might celebrate the day!  A few of the options are a little far fetched (looking at you, 26), but most of them are fun and easy ways to get into the DnD spirit.  Let us know what you roll!

(Fingers crossed at least one of you rolls 25!)

We’ll see you next Friday for five more highlights from nerd culture. Until then, feel free to share a highlight in the comments if we missed something!