First, the press release, then I’ll follow with some thoughts.

“Wizards of the Coast is psyched to announce the first collaboration on a major product between Dungeons & Dragons and Magic: The Gathering with Guildmasters’ Guide to Ravnica releasing everywhere on November 20. The book will contain everything fans need to play D&D in the world-spanning city of Ravnica, the fan-favorite Magic setting populated by ten rival guilds, each with its own ethos and agenda.

Wizards is also announcing D&D fans can now return to a magic-heavy noir setting with Wayfinder’s Guide to Eberron, a new document written by Keith Baker available online now. The exploration of these settings is a testament to how fan excitement can shape where D&D travels to next.” 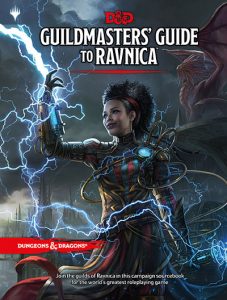 Now, some thoughts. First, it’s rad that WotC used the word “psyched” in their official press release. I whole-heartedly support that.

Second, dovetailing Magic and D&D is a sharp business move. There area lot of Magic: The Gathering players out there who are D&D adjacent but haven’t yet jumped into the game. Allowing them to get their feet wet with D&D while playing in a setting that is beloved and familiar to them is smart.

It’s good for old school D&D players as well. I’m not familiar with Magic’s Ravnica but folks rave about it, so who am I to poo-poo it. In stead, I plan to go with it. Once case scenario is I realize it’s not for me, yet others will enjoy it.

Yet, I suspect I will enjoy it myself. From what I understand, Ravnica is a splash of Planescape’s city of Sigil, while also having strong lore and a hint of the pulp of Eberron (more on that in a moment). 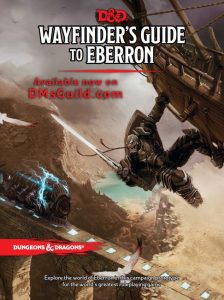 Now to Eberron. Eberron doesn’t go as far back as some of the OG D&D settings like Dragonlance or Greyhawk, but it’s just as beloved. (Read this for a quick history of Eberron.) And Eberron’s high-adventure, pulpy playstyle will fit in really nicely with today’s Twitchin’ D&Ders.

Eberron’s creative team is who you’d want. The setting’s creator–Keith Baker–produced the PDF, so it will be a solid, grounded product that maintains the core of what made Eberron great.

PDF only for Eberron is not surprising. The release of the Eberron document as a PDF on DMsguild.com makes some sense. WotC has shown they are comfortable with using that platform as a testing ground. Releasing as PDF allows them to seed the world-building flavor text that won’t need further refinement. Meanwhile, they can “playtest” and crunchy bits, like the implementation of the Warforged race.

Eberron inspired content like the Artificer class has long been playtested via the Unearthed Arcana monthly column. Expect that to continue, as WotC seems pleased with the data and feedback they are receiving form that outlet. Then, if the PDF sells well and interest in Eberron is show strong through community created adventures through the DMsguild, then WotC can later add in that Artificer content and slightly rework the Eberron document as a full-fledged printed hardcover.

Nerds are thrilled or they are miserable. As with everything these days, the response is either bliss or disaster.  Many nerds (particularly Magic players) are thrilled that Ravnica has been announced as a D&D setting. Other nerds are tweet-storming their displeasure that their preferred setting–whether it be Dark Sun, Spelljammer, or what have you–was beaten to the punch by another WotC property.

But business is business, nerds, and WotC is a business, man. From a business standpoint, it’s really hard to say much critical about Mike Mearls and team. D&D is stronger than it had ever been. And even if that news doesn’t warm your soul, a new hardcover and a new PDF for D&D is is a pretty great thing, even if it’s not marketing 100% to you.