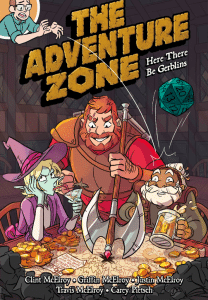 When the podcasting McElroy Brothers wanted to add another podcast to their empire, a show playing Dungeons and Dragons and featuring their father as a PC with 2 of the brothers was probably not the most likely candidate.

Yet as the brothers, famous for their advice show My Brother, My Brother and Me, started the Adventure Zone, they seemed to catch fire with their mix of humor, the D&D starter kit and some solid DMing by Griffin McElroy.

The Adventure Zone quickly became a fan favorite and the longer that they played and released episodes, the more popular it became. But even with that podcast popularity, it was an unlikely announcement that occurred towards the end of 2016 when they announced a graphic novel series based on The Adventure Zone story.

After a significant controversy around the canonization of characters and what people had come to expect, the graphic novel arrived last week. (For an overview of the issues and concerns, this piece by Chris Kindred of Paste Music does a pretty excellent job of explaining and unpacking the circumstances and the eventual release as it is now.)

The book, based on the first storyline of the podcast is all about the team of:

They fight a wave of goblins in the setting that is established in the Dungeons and Dragons starter kit, though they clearly had to change some parts in order to not step all over the intellectual property of Dungeons and Dragons and their parent company, Wizards of the Coast.

Hilarity ensued on the podcast when the story was originally told and the story works well in the book. The adventurers encounter some goblins, that they lovingly refer to as “gerblins” and hilarity ensues as they fight, charm, and work together to resolve the tension of the first mission that they have been given, moving along in each chapter as characters.

While written by all of the McElroys, the book features the art of Carey Pietsch, who does great work in creating a fun feel for the book that also embraces the fantasy. The danger of a book like this is that it could easily become pretty rote, recounting something that you would think most of the audience for it has already heard.

The layouts and angles that Pietsch uses, along with dynamic lettering really helps the story come to life in this new format. While the humor translates well, the art elevates the story and that is an important aspect. Also, the way that they insert Griffin as the DM into the comic is really well done; it could have easily felt like a super cheesy gimmick and instead it plays really well and in a way that is understandable.

It is also interesting that the book reads as if each chapter is a single issue of a comic; it makes me wonder if they ever saw this as a book to bring to the market in issues or if it is just the nature of the history of comics and the sequential storytelling that happened in the podcast. 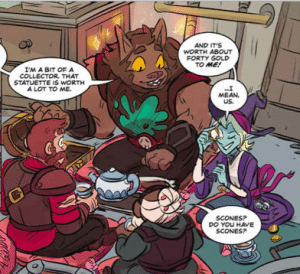 So, if you are interested in a humorous fantasy tale, whether you have listened to The Adventure Zone podcast or not, this first graphic novel is worth checking out.

I will say, like the show, if you are a rules lawyer type who wants to “Well, actually…” everything, this book probably won’t be a favorite, unless you want to write long tomes on the Internets about all the rules and things they got wrong.

Also, because of the language used in the story, I’d keep this book (and podcast) away from the kiddos. The art likely will draw their attention but the language makes it best to keep away from anyone who you think shouldn’t be regularly hearing, seeing or reading the F word.

That said, it is great to see this story get told in a different format and one that should hopefully boost both the sales of this book but also interest in the previous stories told on The Adventure Zone podcast.

Rise of the Dungeon Master: The Graphic Novel Biography of…