You may have noticed here at Nerds on Earth that we are into many nerdy things but two probably stand out: comic books and roleplaying games. When I heard there was a product that combined those two things well, it was assumed that we would be checking it out and giving it a review. (And no, we don’t mean the wonderful Frost Giants Fury, which @EarthNerdAdkins covered in a spectacular video feature.)

Rise of the Dungeon Master is a graphic novel written by David Kushner and illustrated by Koren Shadmi. It is basically an illustrated biography of Gary Gygax, the creator of Dungeons & Dragons.

This work itself is both a good narrative of the early history of Dungeons & Dragons and of Gygax’s life. The story is likely birthed from a 2008 Wired magazine article that the author, David Kushner, wrote. With some updated information from the years since and supplementing the story with Shadmi’s art, this graphic novel is an interesting addition to any gamer’s library. 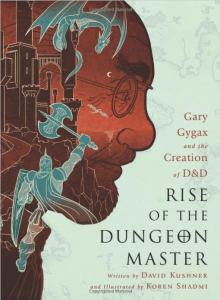 You will learn new things. Because Gygax and his family were a part of the original article, we gain some insights into how a high school dropout created the Dungeons & Dragons games that have eclipsed over a billion dollars since.

You will better appreciate the history of the game (and its predecessors.) Understanding the roots of the game help me appreciate where and how it works together now in its modern version.

For instance, I had no idea that d20s were used primarily as a classroom tool before Gygax discovered them when he and his friends were creating a version of HG Wells’ War Games. And it does a nice job of talking about the relationship and partnership of Gary and Dave Arneson, who is credited as the co-creator of D&D.

Seeing D&D as an operating system is a revelation. One of the key points that is made in the book is that the popularity of D&D is because it essentially created an operating system that others can lay “applications” over. In a world where we often talk about homebrew campaigns versus using existing modules, it is easy to overlook the dexterity that the D&D (and later AD&D) system gave to game players.

The arc of D&D in popular media is interesting as well. Most players know about the Satanic Panic that happened around roleplaying games in the 1980s. This work does an excellent job explaining how that all initially happened and how it spiraled out of control, while at the same time making TSR loads and loads of money. 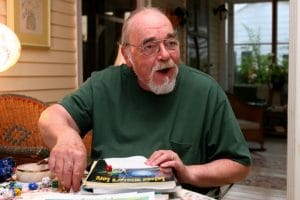 It honors Gary Gygax. There is a reason that so many people, especially creative people talk about the influence of Dungeons and Dragons on their lives: it open the door of possibility.

It is possible to overstate the influence of D&D on things but it is far more likely to underestimate the value and influence D&D has had on pop culture and continues to exhibit today, in what many have to see as its renaissance era, raising the game to even higher levels of popularity.

Get Rise of the Dungeon Master here.

This board game review is on a Deadline!