In 1988, Marvel Comics was at its zenith and a bidding war erupted. A Revlon executive-led company managed to win the bid and within a short time took Marvel Entertainment Group public.

But the second place bidder was a group that was led by former Marvel editor-in-chief Jim Shooter. And when you have the kinds of funds that you could attempt to buy Marvel, you don’t just walk away. Instead, Shooter and company launched Valiant Comics. Since then, Valiant has existed largely as an also ran, compared to Marvel, DC, and Image. But over time, they have been able to build out their own universe, complete with characters and retcon reboots and crossovers! 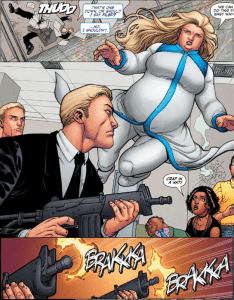 I did not know much about Valiant Comics until recently when the character of Faith came to my attention, as she is talked about as one of the most “normal” people who happens to be a hero. One of the things that stands out about the character when you first start learning about her is that she is a plus sized superhero who can fly.

In fact, that notion is one of the things that drew me to delving into the first collected trade of the Faith solo series written by Jody Houser and art by Francis Portela and Marguerite Sauvage. The series took a character that had existed since 1992 as a part of the Harbinger books but was given her own book in 2016.

The gist of the story is that Faith has left her superhero team and moved to Los Angeles to pursue life as a solo hero and, in her alter ego, working as a writer at a entertainment focused paper and magazine.

While those two tropes could easily delve into cliched, repetition of stories we have already seen, Houser is able to do some unique things that make it a book that is worth checking out.

For example, the humor in Faith is really well done. If you like the tone and type of humor that is prevalent in the Buffy the Vampire series, you will like Faith. She is both a hero and a consumer of pop culture, as well as a critic of it.

That allows Houser to take some ideas that exist in the real world and lay them over the world heroes live in. For instance, Faith left the hero team and her former significant other essentially went to work as a reality star, which Faith then has to write about in her day job. It is very, very funny and smart critique of pop culture.

The twisting of the ideas and tropes is fun. Spoiler for the first trade, but pretty early on Faith’s co-workers put together that she is also Zephyr, her superhero identity. Rather than the silly idea that Clark Kent’s superhero identity is covered by a well place pair of glasses, Houser uses the situation to comment on the silliness of that trope. It is a well done, humorous deconstruction of superheroes and identities in a world where we seemingly keep pushing the comics into darker and darker realms.

And the book is optimistic. So, in a world where our movies and stories in comics are really heavy and dark, this book was a source of joy and light. Faith likes being a hero. She shares the joy of helping others and feels that pressure but it doesn’t overwhelm her. It felt like a throwback to an earlier era but set it in a modern world that could use the light and life!

Finally, Sony Entertainment is in an effort to make their own superhero cinematic universe and as a part of that effort, they have purchased the rights to many Valiant properties. And among those properties, they seem pretty certain to want to bring Faith to the big screen.