Welcome back to another installment of My 90s Summer. Each week this summer, I’m revisiting a comic book that I read in the 1990s and giving it a review with my world weary eyes.

After last week’s, shall we say, interesting read through of the first Shadowhawk miniseries, I thought I would jump to another comic book company of the 1990s, Malibu Comics. Specifically, their Ultraverse line of comic books. Malibu comics had been around since the late 1980s, but the Ultraverse debuted in 1993. The Ultraverse was specifically designed to ape the shared universe concept that had served Marvel and DC so well.

Malibu Comics published a ton of titles during the comic book boom before becoming another one of the victims of the mid-to-late 90s bust. And they weren’t just involved in comic books: there was a Ultraforce cartoon, video games, and Night Man even had a TV series! A TV series that improbably lasted two whole seasons! A nine-disc box set was released in June. Amazon doesn’t lie. And yes, it was just as dumb as you’re probably imagining.

As for the comic books, I read several Ultraverse titles: Prime, Exiles, Mantra, Hardcase, Prototype, The Night Man, Rune, and many others. The catch? I remember almost nothing about these characters. I know I collected them, I still have many of the issues, but I remember very little actual information about these books.

The one thing I do remember is that I liked Prime the best!

Prime was like Captain Marvel/Shazam, but, you know, not. That’s how comics work! I pulled out the first five issues to see if my nostalgic view of the series could be as rosy as I remember. So how did it hold up? Let’s check it out! 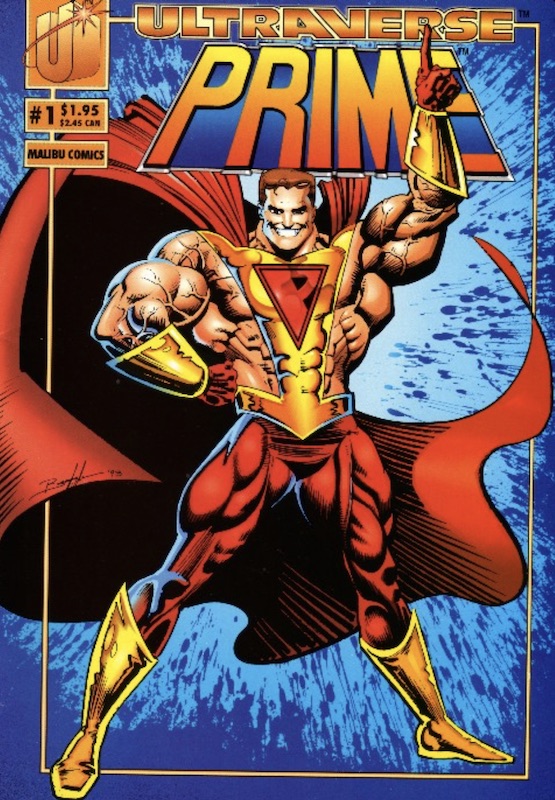 Prime follows the adventures of Kevin Green, a faceless, nondescript teenager that makes Darkhawk’s Chris Powell seem fully fleshed out. Even his parents are kind of nebulous scenery in the book. Kevin is just a kid who got superpowers.

Here’s what happened in a nutshell: a mysterious man asks Kevin to follow him down into a subway, where they meet an old wizard. He tells him to use the power word PRIME to become the overly muscled hero of the same name.

Actually, none of that’s true. I just recounted Captain Marvel/Shazam’s origin so I could get to a certain word count.

The first five issues of prime don’t do a great job of telling you how Prime got his powers. Despite Prime essentially being a Captain Marvel/Superman clone, readers don’t get the clearest answer to where he gets his powers from. There was some secret program that somehow his dad was involved with, but the actual how and why Kevin got his powers wasn’t directly addressed. 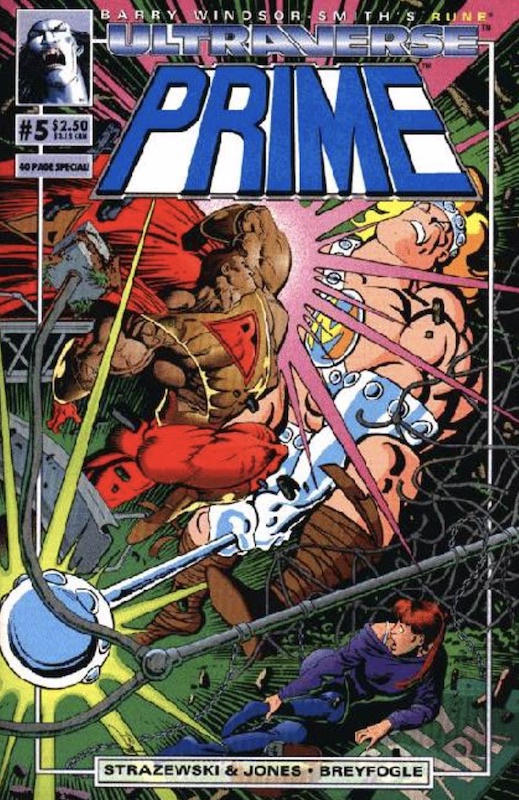 All the reader is sure of is that Kevin doesn’t seem to have a lot of control over when he becomes Prime. Like getting an awkward puberty-induced erection in freshman biology, Prime could pop up at random. Prime is an organic liquid that oozes over Kevin to make him a super buff hero, the kind that has muscles for his muscles and bulging veins that would cause severe pause for many medical professionals.

The first issue actually does have an interesting framing device to introduce Prime. Two perps that Prime dealt with retell their story to a shady figure. In this way, we’re introduced to Prime.

He apparently has a huge crush on his classmate Kelly… which results in several creepy interactions. This ultimately leads to Prime beating up his lecherous P.E. teacher who has an affinity for being handsy with the ladies. He also apparently doesn’t like drugs, so he takes on the stereotypical gang bangers as well. By the end of issue #1, Prime has also taken on Somali militants. He’s quite busy.

And that’s the template for those first five issues. Prime pretty much spends the entire first few issues bouncing around beating up various baddies and other Ultraverse guest stars with no real hint as to where it’s going. Sure, there’s a shady government mad scientist and military official that show up and give equally shady nods to Prime’s origin.

Maybe it’s the evolution of comics towards the trade paperback storytelling we comic readers are accustomed to today, but there’s no sense of a clear story that’s trying to be told. It just all kind of happens and we muddle onto the next page.

The lack of focus doesn’t mean that I disliked my reading experience. I certainly didn’t love my read through, but it did get me curious enough to pull out the next few issues to see if a story was ever really found. It was entertaining enough.

Comic veteran and Prime co-creator Norm Breyfogle handled the art duties on the first twelve issues of Prime. His art style was cartoony, but also a little gross. Let’s look at a few panels.

Prime didn’t have a clean transition from prime to Kevin. There’s no saying a power word and magically turning back into good ol’ Kevin. Prime usually melted away after taking too much damage. It isn’t a pretty thing to watch. I guess if you need to set yourself apart from the rip off character that you are also ripping off, one way to distinguish yourself is by making it hard to watch.

Kevin has a crush on Kelly. It’s sweet.

Besides Kevin, Kelly is the only character that’s even remotely fleshed out in these issues. Which is to say, she’s the perpetual damsel in distress and pretty much nothing else about her matters. However, Kevin maintains the crush on her while Prime, who is obviously a much older guy, making things about a skeevy as they can get. The book mentions several times how gross Prime’s crush is on Kelly, but then barrels forward to the next page of explosions and bullets.

I do love the fact that Ice T and Kevin Costner are lifted up as strong guys. Ask Superman how having Costner as a dad worked out. 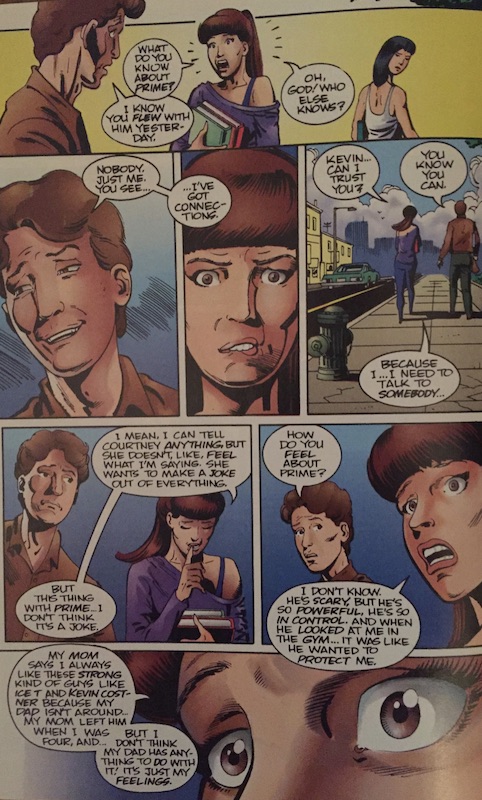 Like any new company or shared universe in the 90s, the Ultraverse had its fair share of out and out direct copies of characters from marvel or DC. Prime is the (snicker, snicker) prime example of such a character, but he wasn’t the only one.

Enter the Iron Man of the Ultraverse, Prototype! Not-Tony Stark shows up for issues #3 and #4. And just like any cliched meetup of this kind, the two mistake each other for villains and are compelled to beat the ever-living hell out of each other for a solid issue. Good times. Definitely worth a variant cover.

Ultraverse Prime: Why You Should Check it Out

Let’s be honest, this isn’t great literature. There’s a reason that you could reasonably be expected to walk into almost any comic book shop that has a sizeable 90s dollar bin and pick up a pretty decent run on almost any Ultraverse title.

The Ultraverse tanked for a lot of reasons, like so many title in the mid-90s, but the acquisition by Marvel didn’t help. Marvel scrapped much of the fat of the Ultraverse, kept a few characters like Prime, and revamped the entire continuity. Marvel gutted their entire universe and kept it for parts. Within a couple of years of their Marvel acquisition, the Ultraverse was dead.

Due to legal maneuvering by some of the previous owners of Malibu, Marvel in recent years has pretty much given Ultraverse fans zero hope of ever seeing the characters again. That might make it seem like there’s no good reason to pick these books up. Maybe it’s the history buff in me, but I am morbidly curious about dead universes like this. They provide an interesting time capsule of what comic books were like. No, readers won’t get a definitive, satisfying ending. That doesn’t mean that readers can’t enjoy these books for what they are, entertainment.

But if you need an actual reason, here it is: Prime later had an awesome metal band haircut. Watch out, ladies. Nuff said.

The Iconic Gelatinous Cube of D&D: Will that float your boat?