The Iconic Gelatinous Cube of D&D: Will that float your boat?

Let's do some math.

David Letterman isn’t the only person curious about the question of if an item will float. Nerds on Earth is concerned about such banal topics as well. Specifically, will a Gelatinous Cube–a ridiculous monster in a game known for its ridiculous monsters–float?

The short answer is, well, yeah, a Gelatinous Cube will float. 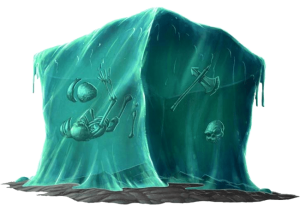 First, let’s examine the mold that a Gelatinous Cube fits in. As a D&D creature, it goes way back. As in the very first Monster Manual in 1977 back, where it was described as a ten-foot cube of transparent gelatinous ooze, which is able to absorb and digest organic matter. Put a nail in “ten-foot cube” because we’ll come back to that.

In terms of appearance, it looks like a transparent ooze of mindless, gelatinous matter that has just been plopped out of an ice cube tray, only, you know, muuuuch bigger. David M. Ewalt, in his book Of Dice and Men, describes the gelatinous cube as “a dungeon scavenger, a living mound of transparent jelly.”

It’s a scavenger because it slides through dungeon corridors, absorbing everything in its path, digesting everything organic and secreting non-digestible matter in its wake. Many a D&D adventure has rolled a perception check to see a gleaming +1 sword seemingly floating through thin air, only to reach for it and find himself engulfed in a Gelatinous Cube, now fated to be slowly digested.

Yeah, yeah, we know what a Gelatinous Cube is? But will it float?

First, we know the size of an average Gelatinous Cube, a ten-foot cube. Being the mathemagicians that we are, we can now determine its volume.

The Pathfinder RPG has more support for it than any other edition and they added some juicy jello lore to the Gelatinous Cube in their 2009 Dungeon Denizens Revisited supplement. Specifically, this section: “A typical gelatinous cube […] weighs over 7 tons. They grow to fit their surroundings, however, so a cube inhabiting a giant-built dungeon can reach sizes of 20 or even 30 feet to a side with enough food.”

So now we know the weight of a Gelatinous Cube.

Approximately 224 kilograms per cubic meter doesn’t mean pudding if we don’t have anything to compare it against. As David Letterman has taught us, an object with a lower density than water will float. Well, the density of freshwater is about 1000 kg/m3 and if it is salt water, it is even more, as salt ions are heavier than water molecules.

So, yeah, a Gelatinous Cube will float and float pretty high up in the water to boot.

This is actually something that Paizo got wrong, which is ironic, as Pathfinder is the mathiest of RPGs. But in their Dungeon Denizens Revisited lore writeup, they use this line to describe a Gelatinous Cube:

“Shallow pools up to 10 feet deep provide no obstacle to gelatinous cubes, however, as long as at least some parts of their bodies protrude above the surface to allow breathing.”

A recent D&D 5e book got it right however. An encounter in Out of the Abyss says this about Glabbagool a named NPC within the adventure: “If Glabbagool is with the party, the intelligent gelatinous cube floats upward as the water rises and squeezes through a crack in the ceiling to escape the flooded temple and remain with the characters.” Yeah, that sounds like floating to me.

Yeah, the fact that Gelatinous Cubes float could get interesting. And it just shows the fun you could unleash if you pay attention to RPG math, like any good mathemagician would do.

7 Reasons Why You Should Run a Published Adventure