In Maiden‘s Quest from Wizkids Games, you find out what happens when the damsel in distress gets tired of waiting on her knight in shining armor. She grabs her heels, her clutch, and Snickers the cat and facilitates her own rescue.

Maiden’s Quest uses a new card mechanic (at least it was new to me, and I’ve played a good many of these kinds of games) to facilitate gameplay. You select your Maiden and her Captor and the back of both of those cards give you instructions on how to build their unique decks. The two decks are then shuffled together to form a floor of the tower, and off you go!

You draw cards until you hit an Obstacle, placing all cards between Obstacles at the back or bottom of your deck behind your Rest Cards (This is called Cellaring). At each Obstacle (usually an enemy, but sometimes also a door or even your own Maiden card), you choose to Fight or Run. 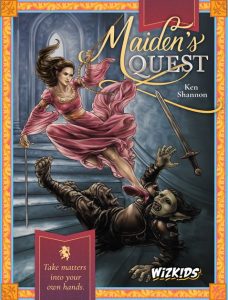 To Fight, you arrange the next 5 cards into your Fan and hope some combination of the symbols at the top left of each matches those needed to beat the Obstacle in your way. If you win, you flip the Obstacle over and gain its rewards. You’ll get Upgrades to your gear, keys for doors, treasures, and more symbols for use in a Fan later. All of the cards are then Cellared.

To Run, you arrange the next 5 cards into your Fan and choose one to Downgrade before Cellaring them all. You can Run for free from Obstacles of a higher level than the floor of the tower you’re currently on, or if you have a Haste symbol somewhere in your Fan.

Every time you hit the Rest cards at the bottom/end of your deck, you shuffle, progress to the next level of the tower, and keep going.

You win the game by finding an Exit or defeating your Captor, but you have to do so before you finish your seventh trip through the deck!

This last point comes with a bit of a caveat: the game moves quickly in large part due to the fact that gameplay is simple, and I don’t mean that in the good way. There is a little bit of strategy when selecting your Maiden at the beginning and Upgrades during play, but the shuffling and inability to see what cards will comprise your Fan leave a lot up to frustrating chance. I wish it had a good bit more depth than it does, for sure.

And I like the system of Upgrading or Downgrading your cards, but it does get a little clunky at times. Having to flip and/or rotate your cards is neat and adds some variety to the items, but it requires you to pay very close attention to your deck’s orientation at all times. One careless shuffle, and you have to reset your game. This didn’t happen to us, but having to be so vigilant and careful with a process that is usually mindless was a bit taxing. 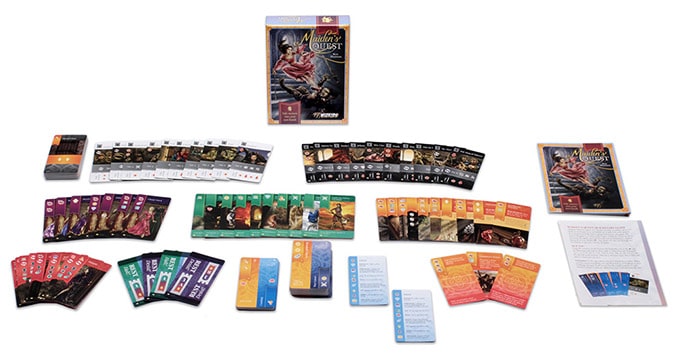 One of my gaming group made the comment that this game would play a little better as a mobile app, and he is on to something there. That would 100% do away with the time required to build and combine the decks (select your Maiden and Captor and boom, you’re done!) and it would remove the nerves surrounding Upgrading, Downgrading, and shuffling.

It would also make any of the game modes involving 2+ people a little easier to facilitate. Send or accept an invite and off you go!

That said, I can’t put a mobile game on my Kallax shelves on display for all to see and I’m not much of a mobile gamer anywho, so I’ll stick with the analogue system, thank you.

All in all, Maiden’s Quest is easy to pick up and play. Solo play modes are always a plus in my book since I’m single and live alone, and the variety of Maidens and Captors coupled with the difficulty options and some Epic Treasures that you earn by completing certain objectives while you play (did someone say Achievements?) give me plenty of incentive to break it out now and again.

You can snag yourself a copy of Maiden’s Quest from Amazon here or ask for it at your FLGS.

[Disclosure: Wizkids Games provided Nerds on Earth with a copy of Maiden’s Quest in exchange for an honest review.]

First Look: Rise of Tribes, a Civilization-style Board Game

To Stealth or To Stab? That is the Question in the Kodachi…

Review of Chiyo’s Secret: A Board Game of Deception in…

Heroes of Dominaria: A New Magic The Gathering Board Game…