Architects of the West Kingdom: The Newest Board Game from Designer Shem Phillips

Raiders of the North Sea is unquestionably one of my favorite board games. So when I heard that designer Shem Phillips was releasing a follow up, I was immediately interested.

That followup is Architects of the West Kingdom, a game that has broad similarities with Raiders of the North Sea, yet is undoubtedly a wonderful game in its own right. 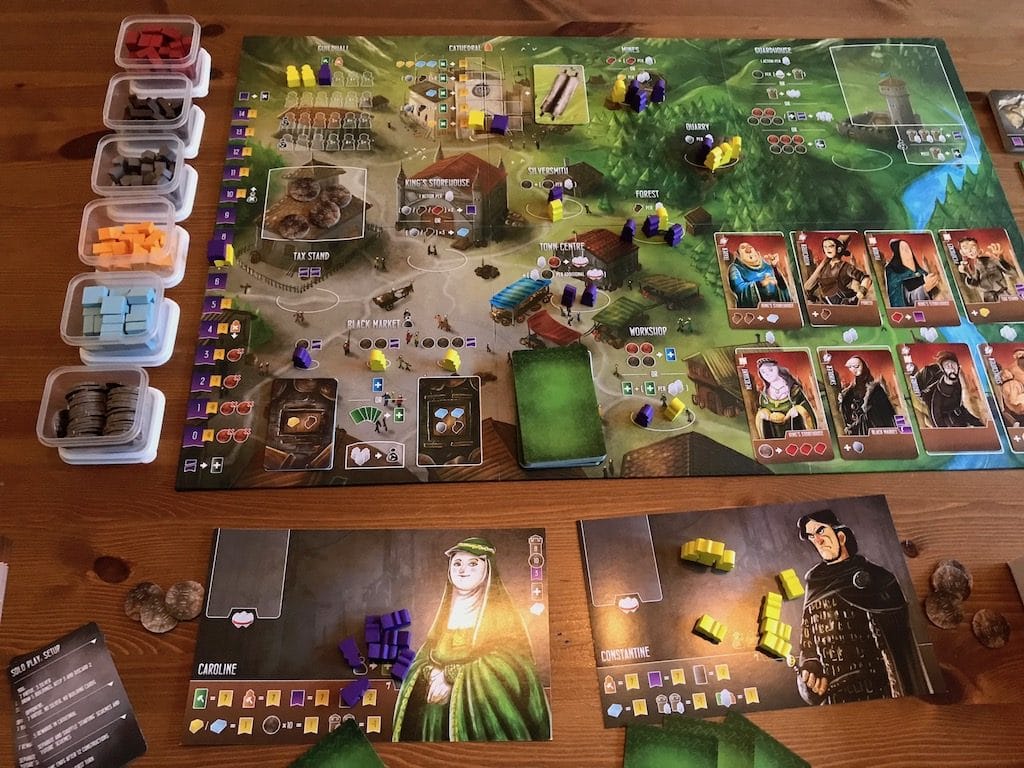 Architects of the West Kingdom

Architects of the West Kingdom is about…uh, architects. You are building things in a kingdom and you place workers in order to collect clay, wood, marble, gold…you know, there are a LOT of resources in this game and I’m there for it. The variety of resources and the villagers cards that allow for some wheeling and dealing with those resources, gives each turn a ton of options without ever being overwhelming.

Whereas Raiders of the North Sea has a brilliantly simple starting mechanic (you’d place a worker, then you’d take a worker), Architects of the West Kingdom allows you to place a single worker, but you get oodles of them.

The more workers you place on a board position, the more resources you get from that position. But it’s not all collection. There is a Black Market and a Virtue track, meaning one of the “levers” in the game is balancing just how on the up-and-up your Architect is.

The only time you lose a worker is when you decide it’s your time to build a building. There is more I could explain; there is a lot going on in Architects of the West Kingdom. But everything plays together smoothly and–although there is added complexity in this game–the game plays on a difficulty level just one our two dials higher than Raiders.

I’m a Shem Phillips fanboy and that certainly doesn’t change with Architects of the West Kingdom. I thoroughly enjoyed and hope it is the beginning of a new trilogy, much like Raiders of the North Sea. The artwork is again by The Mico and it is again wonderful. The components are top notch and the rule book is crystal clear.

I’ve already gotten good play from the game and I suspect I’ll get a lot more, largely due to the fact that it includes a great solo mode. The game includes a deck of cards that allows you to play against an “AI” that works incredibly well.

I highly recommend Architects of the West Kingdom for anyone who likes medium weight worker placement games. You can pre-order it direct from Renegade Games Studios (their website includes a great how to play video and a downloadable rulebook), from Amazon, or better yet, ask for it at your FLGS.

[Disclosure: Renegade Game Studios provided Nerds on Earth with a copy of Architects of the West Kingdom in exchange for an honest review.]

Want to experience the full history of roleplaying games? Look no further than the Alexandria RPG Library

Play Your Way Through the Beloved Movies in Toy Story: Obstacles and Adventures

New Flight Plan: The Latest Expansion for the Excellent…

Star Wars: Outer Rim is a Board Game with a Story to Tell.