CROM! The coming of Conan the Cimmerian is finally upon us!

Announced earlier this year, Robert E. Howard’s Conan the Barbarian is returning home to Marvel Comics having spent the better part of the 21st Century at Dark Horse Comics. Marvel originally published Conan from 1970 to 2000. Dark Horse then won the license, and produced books through 2017.

After a year on the sidelines, Marvel promises a huge return for everyone’s favorite Cimmerian with a sword.

While this nerd absolutely loved the Dark Horse run, I’m excited to see if Marvel can do for Conan what they did for Star Wars. I even wrote about my excitement for bringing Conan comic books back home to Marvel back in the spring. 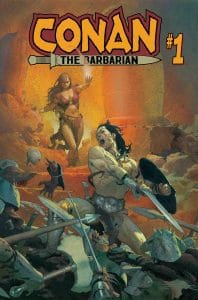 (W) Jason Aaron (A) Mahmud A. Asrar (CA) Esad Ribic
BY CROM, THE GREATEST SWORD-AND-SORCERY HERO RETURNS TO MARVEL!
From an age undreamed…hither came Conan the Cimmerian, black-haired, sullen-eyed, sword in hand, a thief, a reaver, a slayer, with gigantic melancholies and gigantic mirth, to tread the jeweled thrones of the Earth under his sandaled feet…
Robert E. Howard’s creation returns to comics, in an epic tale as only MARVEL could bring you! Conan’s travels have brought him to the far reaches of the unknown, from his birthplace in Cimmeria to the kingdom of Aquilonia and all in between. As his fighting prowess allows him to carve his way through life, so too does it attract the forces of death!
The all-new ages-spanning saga begins here, by writer Jason Aaron (THE MIGHTY THOR, STAR WARS) and artist Mahmud Asrar (UNCANNY X-MEN, ALL-NEW, ALL-DIFFERENT AVENGERS), as Conan’s destiny is forever changed! 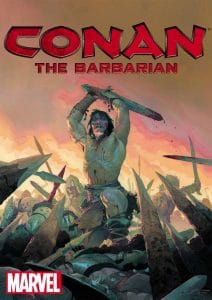 BEYOND THE SAVAGE BORDER!

CONAN finds himself beyond the Black River, surrounded by the warlike PICTS! But the tribesmen may be the least of his worries if he cannot fight his way through the demonic beasts slithering around the forest! The epic return of the mighty Conan continues…

I can barely contain my excitement! Marvel absolutely nailed it with their creative team for the book. Just look at it and try not to weep. I mean, weep manly tears, but weep nonetheless. You can also pre-order several of the popular True Believer dollar titles, as January spotlights several of Marvel’s greatest Conan hits from the past. There’s also an Epic Collection featuring issues #0-19 of the fantastic Kurt Busiek run originally published by Dark Horse. 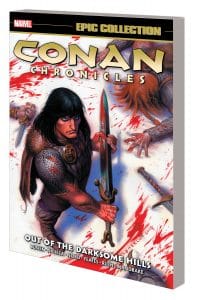 To celebrate this momentous occasion, I will be writing a series of articles in November and December to highlight Conan’s contribution to comic books, both from his earlier Marvel days and his time at Dark Horse. The character has a rich and entertaining history in the medium of comics.

The move to Marvel provides as good of an excuse as any for me to nerd out over one of my favorite heroes of fiction. I will be recommending great reads, exploring the characters and mythos of the Conan universe, offering some tongue in cheek advice on reading Conan comics, and hopefully a few other surprises.

Make sure to get in your Conan the Barbarian pre-orders at your local comic shop. Also, make sure to check back in November and December for exclusive articles celebrating all things Conan. You don’t want to displease Crom!

Staying Pure for Conan: How I Learned to Stop Worrying and Love the Pastiche

Staying Pure for Conan: How I Learned to Stop Worrying and…