By The Bullpen On Nov 12, 2018 Last updated Feb 12, 2021
"Stan Lee" by Gage Skidmore is licensed under CC BY-SA 2.0
Share TwitterReddItPinterestFacebookEmailPrint

Stan Lee made a profound and indelible contribution to American folklore and popular culture. His legacy has been to entertain and inspire millions. This is certainly true of the writers and contributors of Nerds on Earth, and we wish to offer a few words of tribute to Stan “The Man” Lee.

The easy thing to talk about with regards to Stan Lee would be the impact he has had on pop culture. This generation’s billion dollar movie franchises were birthed 60 years ago in the imaginations of people like Stan Lee and Jack Kirby.

But I think it goes even further than that; the folklore of the second half of 20th Century America is tightly bonded with what happened when a 40 year old Jewish man took over a medium that was dying as it told cowboy and romance stories and created the icons of our lore ever since.

Marvel Comics told the stories of teenage heroes like Peter Parker, rejected mutants like the X-Men and the family we all wished for in the Fantastic Four. And then they kept passing on those stories as each generation gave it a rewrite, an update and a new spark.

Hundreds of years from now people are going to wonder what great politician embodied the hope of the 20th century when he said “With great power comes great responsibility” only to discover it was written in all our hearts by Stan the Man Lee.

Maybe you can’t give Stan Lee all the credit, but he certainly had a huge hand in making it cool to be a nerd. Through the Marvel comics and, most recently, the Marvel Cinematic Universe, Lee helped bring superheroes from the world of children’s toys and comic book shops into the mainstream. While it may have once been unheard of to hear adults discussing their favorite superhero, over the past decade that conversation has become commonplace and accepted.

Much of this impact will be measured in movie revenues or T-shirts sold, but the true and important impact is in the way it has helped people embrace their nerdiness. Lee helped produce a line of movies so entertaining and so compelling that it has allowed nerds everywhere to feel more and more comfortable with who they are in more public spaces, which is good for all facets of our culture.

If nothing else, Stan Lee and his stories have helped us all remember why we loved superheroes as children and start holding on to those heroes as adults. In a world that seems to only get more difficult to bear every day, those stories of heroism and victory over evil are as uplifting now as they’ve ever been.

For that, the world thanks Stan Lee. May he rest in peace.

As a huge Marvel Comics fan, I’m saddened by the death of Stan Lee. His body of work has left a profound impact on my very soul. The only time I saw Stan Lee was at HeroesCon a few years ago. The price of meeting him was far too steep for my meager paycheck as a teacher, so I figured it was going to be a bust that weekend. I did manage to sneak a peek at him while walking past on Saturday before one of his handlers rudely pushed us commoners away from viewing him pro bono.

It’s a sad commentary on his life for the last decade that he was being used and abused by those around him. I was kind of bummed that I wasn’t even allowed to look at him. Fortunately, his handlers allowed him to give a free Q&A panel for the huddled masses that Sunday. It was awesome to hear him speak, magical even.

I’ve never read a comic book. Not a single one. And yet, Stan Lee’s characters have had such an impact on my life. The world is better for having its heroes. Those heroes that inspire and excite generations of fans around the world and across multiple mediums.

This is the legacy he leaves behind. Characters that continue to live on through pages & screens, and maybe even the heart of a non-comic reading nerd.

I’ve read comics starring characters created by Stan Lee for 30+ years, but to me the most important thing about Stan is “The Man” himself. In my 30s I was considering going back to college and completely switching career paths. While I was trying to decide if I could do it, I read a book about the history of the comics industry and I found out that Stan didn’t really “succeed” until he published Spider-Man at 40 years old!

The fact that Stan had never given up that entire time helped push me to go back, and it was one of the best decisions I’ve ever made. So, thanks Stan, from a guy you never met.

That heroes should stand up and fight against the bad guys is a message so explicitly obvious in superhero comics that it’s a sad reflection of our culture that we seem to so often miss it. But Stan Lee never missed an opportunity to remind us. Never.

It’s been over three decades of comics for me and I’m still not over the phrase “With great power must also come great responsibility.” Perhaps that was because I was a little science nerd who who read his first Stan Lee comic at age 7 and had only his single mom to help him grow up right. But that’s not entirely true, because I also had the words of Stan Lee.

Peter Parker was a selfless guy back in the 60s, 70s, and into the early 80s comics. Spider-Man helped kids who were being picked on and rescued old women who were having their purses snatched. Spider-Man stopped bank robberies and, of course, fought super villains.

Throughout all that, Peter asked very little for himself, other than a little dough brought in via taking pictures of his crime fighting, selling them as “Peter Parker, Mild Mannered Reporter” to the Daily Bugle, the same rag where J. Jonah Jameson was writing countless slanderous editorials which criticized Spider-Man and made him out to be a public menace. Still, Peter Parker soldiered on, doing the right thing, knowing that with his power came responsibility toward others.

All that flowed forth from the words and values of Stan Lee. Comics can teach you things. Stan Lee taught me things, that’s for sure.

Stan Lee really shaped so much of my future. All those late nights reading comics and early mornings watching Spider-Man and X-Men cartoons. So much of my life has been shaped by him and his creations. I feel like he taught me so much through his actions.

I’m just happy that we have so much to remind us of him. He truly left behind a legacy! I know his adventures in the after life will only be fantastical!

I’m not an avid comic reader, but Daredevil is my favorite Marvel superhero ever since I saw the movie back in 2003, so Stan Lee has my heart in that regard. Not the best movie, but the Devil of Hell’s Kitchen rekindled my interest in superheroes.

Funny enough, my fondest memory of Stan Lee didn’t involve him at all; I swear that Stan Lee passed me in the Exhibitor Hall this past August and I did a double-take. Except it wasn’t Stan Lee at all. Turns out there was a nice gentleman who shared an uncanny resemblance to the comic legend and had constantly (and politely) been telling people all day that he wasn’t who they thought he was.

His smile, however, will stick in my mind–Stan Lee brought a lot of smiles into the world.

Stan Lee was the source of a moral compass for millions of people who otherwise would never have learned why it’s important to stand up to bullies and defend the defenceless. Long before there was a movement for representation of disabilities in the media he and his group was making them into heroes for the whole world. He had a great power for storytelling and took on a great responsibility to inspire with it. I would be a totally different person right now if not for his efforts and I know I’m not the only one who can say that.

I have no possible way of narrowing down the first time I encountered a product of Stan Lee’s. Long before I was old enough to form opinions, his portfolio was prolific and extended well beyond the medium of comic book pulp. His modern cultural impact might be unparalleled given decades of hit Saturday morning cartoon shows and now the incredibly successful MCU.

Not being introduced to comics until later in life, I have to sadly admit Stan Lee’s impact on my life has been mainly of a cinematic nature. However that does not in any way lessen the gravity of being able to meet the titan of a man in person. It was a pleasure to meet such a real and genuine Mega Star.

He will remain alive in every soul his artistry touched. Especially mine. 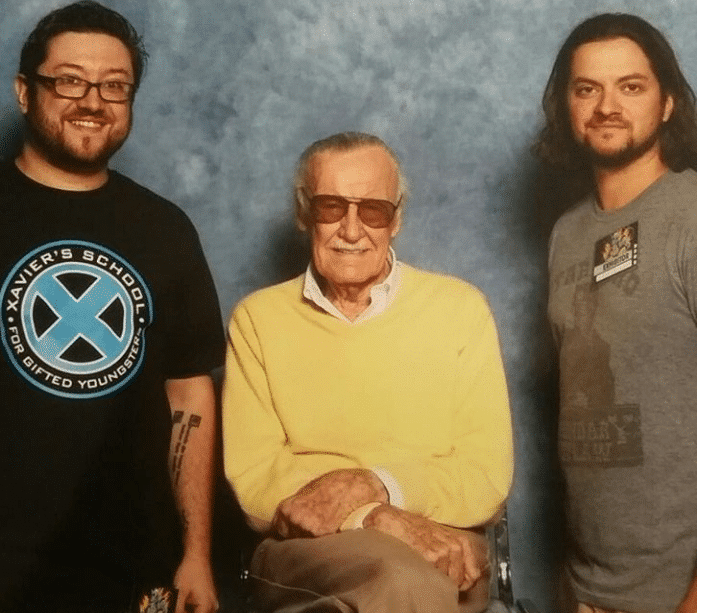 Stan Lee, may your memory be a blessing. Thank you for your characters and your character. There is nothing left to say except EXCELSIOR!

Discussing the Upcoming Premiere of WandaVision on Disney+