Being from the great north that is Wisconsin, I’ve been known to hit the ski slopes every now and again. So when I heard that Pandasaurus Games was bringing those same slopes to the table in the form of Skull Canyon: Ski Fest, I was immediately excited!

Skull Canyon: Ski Fest is designed by Jason Klinke and Kip Noschese, and features art by Gica Tam. It’s a game about competitive skiing down the dangerous Skull Canyon runs, which gives it timing to build some hype with the Winter Olympics currently going on.

Granted, I don’t think Olympic skiers need to contend with a terrifying Yeti. Do they?

Let’s hit the chair lift and see what Skull Canyon: Ski Fest is all about!

The game combines worker placement and set collection elements. Play largely revolves around collecting slope cards, hoping to form the necessary sets that will allow them to claim runs for themselves. Slope cards come in 3 colors (red, yellow, and blue), and show one of 5 style icons (slopestyle, slalom, ski cross, moguls, or off-piste). There are also Yeti cards which serve as wild cards of every color and style.

Each day, players will shred the slopes during the Skiing Phase. Players take turns performing two of the following actions, or the same action twice:

If the player manages to play a set matching the required style as dictated by the style token on the run, you earn twice the amount of Fame from that run. It’s a massive benefit that will have you sculpting your hand accordingly.

Skiing runs is the best way to earn Fame and Victory Points. Fame can be used to purchase Gear cards which will give you the necessary edge to carve out a victory. These can be anything from Heated Gloves to help keep your Claims intact, or a Yeti Energy Drink that gives a skier that boost of energy to ski right around a prowling Yeti. Now available at your local convenience store.

That brings us to the Yeti! If a skier plays a single Wild card when skiing a run, they get to move the Yeti to block a run. This prevents skiers from going down that run unless they have an item that lets them get around it.

Playing 2 or more Yeti cards triggers an avalanche. This is a good way to hamper your opponents who might be on the verge of stealing a run or skiing a run to give them majority of a specific difficulty level.

After a long day of skiing, players relax with the Après-Ski Phase. For fans of Tokaido or PARKS, you’ll find familiar ground here. Players take actions on their way to the Hotel where they’ll sleep before skiing again on the next day. The locations in the village allow players to burn cards and Fame for various bonuses.

The game ends after the third Ski Phase. Extra points are awarded based on Gear cards, Leftover Fame, and Awards for completing the most runs of each difficulty type. Whoever scores highest is the winner of Skull Canyon: Ski Fest! 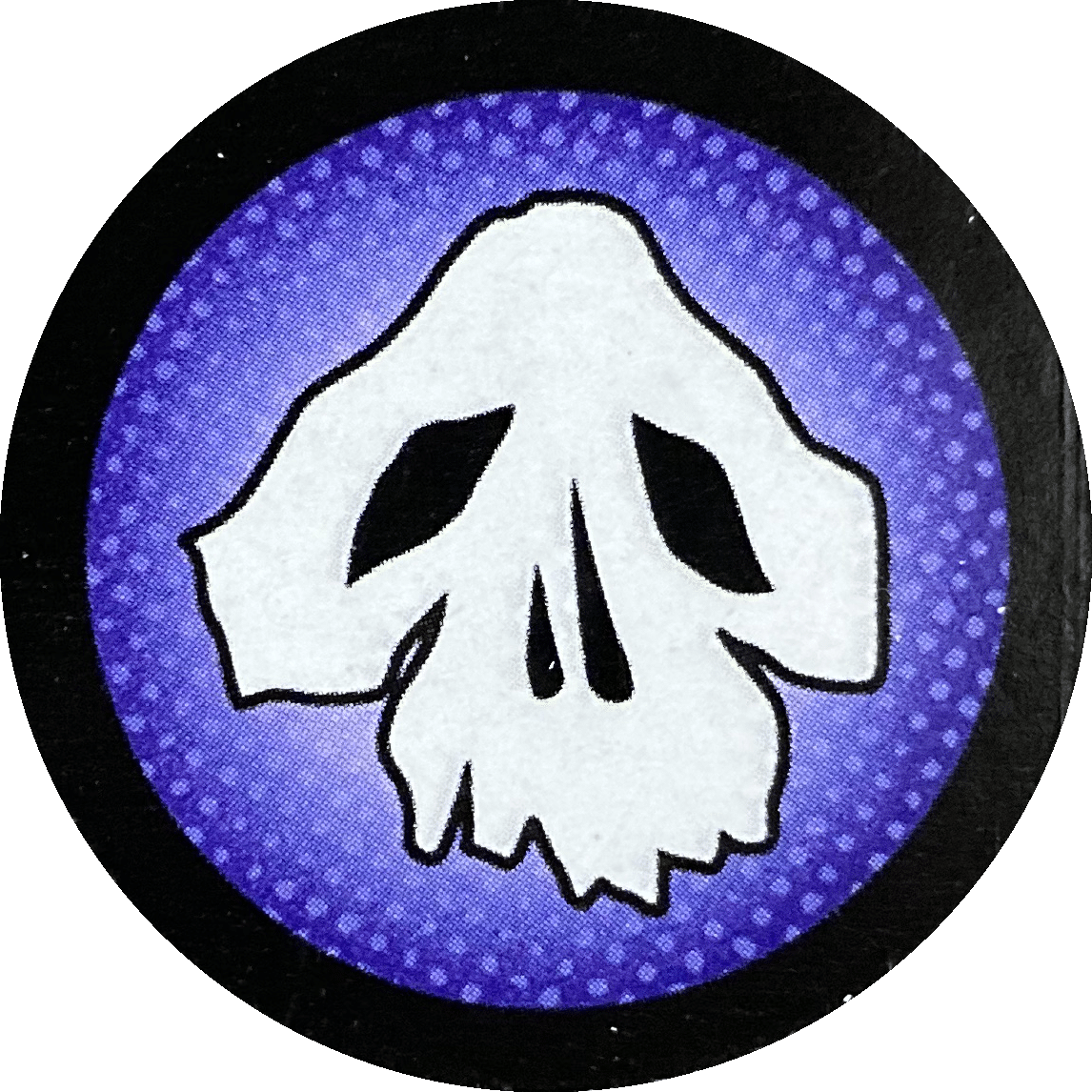 The board for Skull Canyon: Ski Fest is larger than I expected it to be, but that’s not a bad thing. Both the main game board and the Run Difficulty tracker are double-sided to accommodate different player counts. This helps ensure that the game is more balanced depending on whether you’re playing with 2 players or a full table.

Each of the four skier meeples, their respective scoring tokens, and the Yeti meeple are a light formed plastic piece with its own storage place in the game box insert. The Yeti meeple has image screen-printed on the top of it, bringing the formidable foe to life.

The Gear and Slope cards are of decent quality and finish, which is good because you’re going to be handling them a lot over the course of the game. It’s relatively easy to tell which color the cards are; after running the image through a color blindness test it seemed like only Achromatopsia might cause a problem with differentiation.

All of the tokens are a nice, thick cardboard. My favorite component is the Lift Ticket token, which will get you moving up the mountain for free. Even the player cards are a nice overview of a turn and a backside with the Ski Runs scoring. My only real issue with the components are the Style Bonus tokens. They are tiny and it can be difficult to tell which style they represent without taking a closer look.

Strategy in Skull Canyon: Ski Fest is mostly the same whether you’re playing with two players or four. You want to be controlling as many runs as possible when the game ends. However, you can’t just stockpile cards until the end because you likely won’t have enough actions to claim multiple runs on the last round.

I really like that I can choose which route I want to take to victory. Just like other route-building games like Ticket to Ride, you can spend time on accumulating many small, easy runs or you can go for the more challenging expert runs. Obviously you’ll need to complete many more easy runs to earn majority over the other players, but early dominance may dissuade others from copying your strategy. Eventually, trying to steal an easy run isn’t going to be very efficient use of cards, when you could ski an intermediate or expert run instead.

The Yeti adds a really interesting element to the game as well, blocking opponents from certain runs. I appreciate that runs towards the bottom are off-limits to the Yeti, meaning that you’re never completely stuck on the side of the mountain. That wouldn’t make for a very fun two-player experience!

Instead, timing your avalanches and Yeti movement is key. You may want to trigger an avalanche on a run above the Yeti, knowing that you’ll be able to slide right through the Yeti unscathed.

The Après-Ski Phase is also enjoyable, albeit a bit short. You only go through that Phase twice during a game, and it feels like it’s over as soon as it’s begun! It’s also not going to be routine in the sense that players aren’t always going to take the spaces in order from left to right. Players will try to take the spaces that make the most sense for their strategy, and maybe letting their opponents get an extra bonus is a price to that plan.

The overall look and feel of Skull Canyon: Ski Fest is quite charming. It’s reminiscent of comic book art with the bold highlighting and the multi-dot textures. Because of that, it makes me feel more nostalgic, like when I drove past the old 1988 Olympic ski ramps in Calgary.

Everything about the game screams winter retreat at a ski lodge. You even get the extra effects like snow piled up around the text boxes and little events taking place on the slopes. I especially appreciate the attention to detail like making the difficult colors and shapes reminiscent of the standard difficulties for ski slopes. Skull Canyon: Ski Fest is tasteful and stylish.

There are a couple groups of players that will appreciate Skull Canyon: Ski Fest. First of all, if you like any form of set collection game – especially those with route-claiming – this is a game for you. Because you have to actually get your skier up the mountain to claim the routes, there’s an element of timing that you don’t quite get from games like Ticket to Ride.

I had already made the distinction to games like Tokaido and PARKS, although the similarity is mostly mechanically driven towards the Après-Ski Phase only. But still, PARKS has you collecting Gear in a similar way, offering a personal bonus just for you.

Thematically, if you’re a skiing fan then there’s a lot to like here. And even if you’re more inclined to like extreme sports, I think Skull Canyon: Ski Fest is a game that speaks your love language.

There’s really a smattering of many different elements that make this game good enough to recommend. I like to think of it as a step up in difficulty from Ticket to Ride, but an evolution of that game. It’s still approachable to the casual gamer, and there’s enough resource optimization elements for the grindy gamer as well.

I put the proverbial poles before the skis by discussing the mood with the aesthetics, but they really do go hand in hand. Skull Canyon: Ski Fest brings a little nostalgia, a dash of cutthroat hi-jinx, and a sprinkling of tense action racing to result in a perfect cup of gaming cocoa to accompany your day on the slopes.

You never feel like you’re out of the game, and you’re always trying to make decisions about abandoning claimed runs and seeing how high up the mountain you want to go. At the same time, you have that nagging feeling in the back of your mind about wanting to be at the bottom of the mountain at the end of the day to give you prime pickings of the Village actions.

Even a two-player game is tense! You really have to pay attention to what your opponents are doing and try to muddy up their plans as best as possible. As everyone else is taking slope cards, you begin to get an idea of what runs they might be focusing on. And whenever you’re in doubt, just send an avalanche their way!

Skull Canyon: Ski Fest has been a real joy to play so far. I enjoy being able to take whichever runs speak to me in the moment and let the mountain tell me where to go. It takes the ‘route-building’ genre in a new direction, borrowing the good parts from other games to give us a fresh experience. Skull Canyon: Ski Fest carves out a name for itself in the route-claiming genre, with a fanfare of fresh powder.

And even when the snow stops flying here in Wisconsin and I start gearing up for Skate Summer, I’ll still be reaching for this game off the shelf. Maybe it’ll help me cool off in those super hot days! Hey, I can dream, right?

Skull Canyon: Ski Fest releases April 13th, and you can pre-order it from Pandasaurus Games directly. Once it’s out, look for it on the shelves of your Friendly Local Game Store (FLGS)!

Disclaimer: Nerds on Earth was provided a copy of Skull Canyon: Ski Fest from Pandasaurus Games in exchange for an honest review.

Let’s Talk About Cleaning Your LEGO!

If You Have $1,000 Burning a Hole in Your Pocket, Consider these 7 Marvel Comics

Board Game Review: Take on Raccoon City in Resident Evil 3: The Board Game

Board Game Review: Become the Bestest Goblin in Goblin…

Board Game Review: Horizon Zero Dawn: The Board Game…