Board Game Review: Take to the Friendly Skies with Libertalia: Winds of Galecrest by Stonemaier Games!

Libertalia, designed by Paolo Mori, first hit the board game scene in 2012. It had since fallen out of print until Stonemaier Games reached out in 2020 to see if they could create an updated version. Here we are in 2022 with a brand new copy of Libertalia: Winds of Galecrest on the shelves!

Let’s hoist the mainsail and see what Libertalia: Winds of Galecrest is all about!

The crux of gameplay in Libertalia: Winds of Galecrest is centered around the Crew cards. For each Voyage – of which there are 3 in the game – players will be playing the same Crew cards to the game board as they attempt to gain Loot.

On a turn, players will simultaneously play a card facedown in front of them. Once everyone has done so, everyone reveals their card. Crew cards are placed on the game board in ascending value, breaking ties using the Reputation of the players if the same value card is played by multiple people.

At that point, Daytime Crew abilities are performed from left to right. This might be something like grabbing a piece of loot from the bag, discarding another Crew member, or gaining doubloons. One by one, all of these Daytime actions get activated.

Afterwards, Dusk abilities activate. Again, these do interesting things for the players like causing other players to discard Crew from their Ship or allowing more Loot to be taken from the board.

Once completed, Loot tokens are selected from right to left, or from highest-ranked Crew card to lowest. Each type of loot offers its own benefits and some even cause something to activate the second you pick them up. Just don’t grab the purple Relics! Those are bad news all around.

Lastly, Night abilities get activated for every character in your Ship. This can cause you to accrue quite a few rewards if you play your cards right.

Play continues like this until the loot is all gone for the current Voyage. Doubloons are awarded based on your remaining Loot tokens, and then the total doubloons get added to your score tracker. New cards are selected for the next Voyage, and the game ends at the end of the 3rd Voyage.

Whoever has the highest points wins! 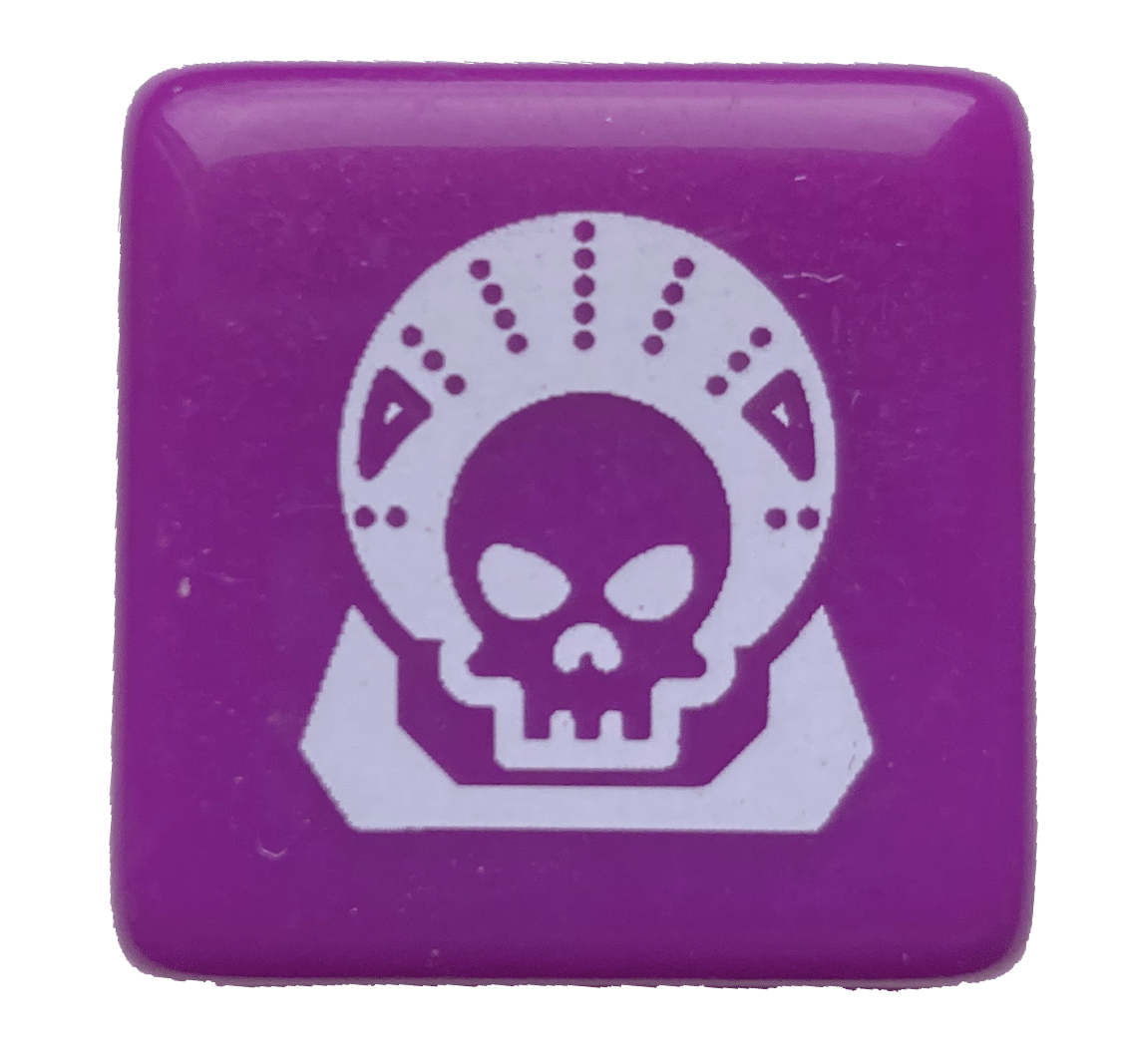 I sometimes feel like a broken record when it comes to Stonemaier Games’ components, but it’s warranted. Libertalia: Winds of Galecrest has exceptional components that enhance the gaming experience. I’ll take a moment to disclaim that the photos in this article showcase metal doubloons, which are an optional upgrade you can purchase directly from Stonemaier Games. The base game comes with cardboard doubloons.

If you’ve played Azul, you will find some nice familiarity with the Loot tokens in the game. These are the same bakelite game pieces, printed with the various Loot icons. Please do not eat the Libertalia game components, no matter how fruity and delicious they appear.

I also really like the treasure chest scoring dials! It makes it very easy to keep track of your score, and actually reduces the number of doubloon components needed to keep the game moving.

The board and cards are made to withstand decent use. You are, after all, constantly picking up cards and moving them around throughout the course of the game. You’ll only end up using 18 cards during the game, but you’ll be cycling through your deck to find the ones needed for the current Voyage.

My only real issue with the Character/Crew cards is that the blue and purple colors are fairly similar. In a dimly lit room it would be hard to tell the difference between them. If you aren’t playing with a full table, I’d recommend using only one or the other.

Stonemaier gets high praise from me on the sustainability front, however. Libertalia: Winds of Galecrest only comes with a single plastic bag for the Reputation markers. The Loot tokens are packaged in a compostable bag and then put into a cloth bag during play. Even the snap-together pieces for the score trackers come in an eco-friendly package.

Of course, the card decks are still wrapped in plastic, the box insert is plastic with a plastic top, and the money tray is also made of plastic, but I appreciate the steps taken towards a more eco-conscious design.

A lot of the strategy in Libertalia: Winds of Galecrest comes in the form of anticipation. You’re trying to divine what the other players are going to do, while also weighing in your own aspirations. Here are a few things going through my head during the card selection phase:

Of course, you’re also factoring in all of the character abilities at the same time. Maybe you don’t mind getting a Relic because you have a card that you can use to get rid of it in a future turn. Perhaps none of the loot really appeals towards you.

I love that everybody is working from the same starting point, leveraging identical Crew cards to best the other players. It’s an interesting game of cat and mouse that gets even better knowing that cards can carry over between Voyages. That means your final Voyage hand could be drastically different than every other player.

You can also play on a Stormy side of the board or the Calm side. Both offer different experiences, with the Stormy side being slightly more cutthroat with increased ‘take-that’ mechanics. Having played on both, I don’t think there’s one I prefer to the other.

The unique art on all of the Character/Crew cards is incredible. You get so much world-building, flavor, and personality that crops into the game by using these cards. Sure, you could go with the argument that each different color could have been skinned as its own faction, but the amount of art required for the game would have increased five-fold.

There’s a certain charm and accessibility that comes with everyone using cards that are styled the same way. Plus, you can identify them much easier from across the table when the text will be upside down.

The only real knock that Libertalia: Winds of Galecrest gets from me on the aesthetics side is that the loot icons come across as a little bit basic compared to the rest of the game. It might just be the white ink against the bright colors that’s creating that illusion, but it just seems less thematic than the rest of the game.

Aside from that, I like the new direction that Stonemaier went with the art compared to the original. This one is a bit brighter in terms of color and theme. The templating and layout goes much further in this revised edition by removing the layer of grittiness present in the original.

Libertalia: Winds of Galecrest can easily find a home on most board game shelves! Obviously if you’re a fan of the pirate theme, adding these 40 crewmates to your collection makes perfect sense. Those looking for a piratey-style of game would be drawn more to the Stormy side of the board than the Calm side. Just having those two options caters to different gaming groups, which is nice to see. Play the game that you want to play!

If you liked the original version of Libertalia, I’ve heard nothing but positives coming from fans of the original. There’s a section in the back of the rulebook that details what was changed, so be sure to check that out to get a feel for that.

Perhaps my favorite part of the game is that it’s very snappy to play. Even the setup and cleanup is snappy! You can open the box and be ready to play in 5 minutes, and the cleanup takes about the same amount of time. More time gaming is always a win in my book.

To summarize, Libertalia: Winds of Galecrest is designed for people who don’t mind a little player interaction in the form of squabbling over loot and some take-that elements. If you like hand management games or games where you have to outwit your opponents, you’ll also find much to like in Libertalia’s box.

The mood you get from playing the game is largely determined by the side of the board you’re using. On the Stormy side, the game plays much more akin to a war of attrition, hoping that your strategies won’t be impact as much by the other players. It’s a futile effort; change is on the wind!

As you play with more people, you begin to appreciate the Reputation track so much more. If there are more players, there is more opportunity for you to play the same card as someone else. Suddenly Reputation matters! In the solo game it seems like hovering lower on the track to get more income is a more viable strategy. But when playing with six, you might want to stick to the higher end of the spectrum.

There will be a lot of hands throwing up in the air and fingers being crossed under the table as you hope for that one piece of Loot to still be there when it comes around to you. So just pop on the Pirates of the Caribbean movies in the background, and start practicing your ARRRGHHHSS!

Libertalia: Winds of Galecrest really surprised me, having never played the original version. With its succinct rules, bright presentation, and quick gameplay, you can find yourself getting a wonderful game played in under an hour with experienced players. I also play a lot of solo board games, and this one clocks in right around 30 minutes.

Stonemaier Games has another winner on their hands! After the first game, I immediately set it up again for a second, and then a third. Every game turns out a little bit differently depending on the Loot tokens and the Crew pulled from the deck, which makes it a nice breath of clean sea air every time I play.

Now then, who wants te’ play another round with me?

Disclaimer: Nerds on Earth was provided a copy of Libertalia: Winds of Galecrest from Stonemaier Games in exchange for an honest review.