By Clave Jones On May 28, 2014 Last updated Jan 21, 2016
Share TwitterReddItPinterestFacebookEmailPrint

I’ve played at least one game of Hearthstone every day since the day I installed it on my iPad Air. I really enjoy it and plan to offer some more thoughts soon, but for now I want to get a touch philosophical if I may.

We’re all living in the Internet Age, although it’s soon to be the Age of Ultron…or Age of Apocalypse…or…nevermind, I’m drifting off topic here.

The point is that today’s games are social in that we can discover one another in a virtual world – we have X-Box Achievements, WoW Guilds, Game Center, Battle.net, and a million others.

Certainly these are social tools and communities, but we’re missing something HUGE if we don’t recognize them as virtual trophy cases as well. Us nerdy humans look for means to compare our feats. We realize that achievement is not just being great at a game, but it’s also about being recognized as being great.

In Hearthstone, I’ll happily be playing a couple casual games of ranked play when you see a player play a…wait…what’s that? I’ve never seen that card…where did he get that cool card? It’s sweeeeet.

MY WORLD WILL NOT BE COMPLETE UNTIL I OWN THAT CARD!

Now what was simply a couple casual games of Hearthstone has become a endless quest of crafting a card. 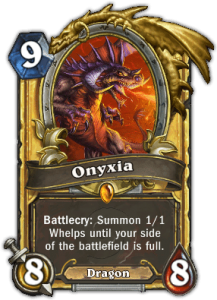 There’s no rule that says, “To win, that need this exact card.” Sure, it might make those next 200 matches go a little smoother (granted you get lucky on the draw), but getting that one card didn’t begin as your primary motivation.

For a nerd, that card now becomes his own personal badge of mastery. It’s not something you own just for yourself, you own it for others to see.

Most achievements do have an empirical value, of course, but that’s not what makes them important. The point of an achievement is to have someone you know or don’t know look at your Onyxia gold card and say, “Holy crap, do you know what that guy had to do to pull that off?”

In a world where we spend a ton of time with people we’ll never meet, achievements are the currency of respect and identity.

It’s mounting that diploma on the wall. It’s having the rare Star Wars figure. It’s the obscure and clever nerd t-shirt that strangers stop you to ask you where you got it.

I’ll proudly admit that I haven’t dropped a dime on Hearthstone, mediocrely gutting it out around Rank 16, but I gotta admit, I really want that card.

Marvel Agents of SHIELD: A Recap of Season 1

Mobile Gaming: If you Haven’t Tried Hearthstone, You Must

Mobile Gaming: If you Haven’t Tried Hearthstone, You…