By Michael Adkins On May 27, 2015 Last updated Jan 12, 2018
Share TwitterReddItPinterestFacebookEmailPrint

As a gamer, I have a love/hate relationship with collectibles in video games.  I think they fall into one of two categories, and I can’t decide whether they are a joy no matter the form they take or if they are nothing more than sadistic ploys by game developers to torture Type A gamers like myself.

I can honestly say that I’ve never bought a game because of advertised collectibles.  I’ve yet to even see a game that uses that as a selling point: “Buy this game and spend 20+ hours collecting hundreds of collectibles with very little in-game relevance!”  It just hasn’t happened yet.  However the number of games that host collectibles as a gameplay feature is extremely high – ranging from treasures in Uncharted 3 to propaganda posters in Far Cry 4 to Riddler trophies in Batman: Arkham City.  That’s three very different games, mind you – a third-person adventure, a first-person shooter, and a third-person combat respectively.

So let me break down the two categories as I see them and I’ll ask you at the end about your opinion on in-game collectibles.

As pointed out in this Hearthstone post, sometimes collectibles are points of pride.  They’re to be displayed and envied by those who know what it took to earn them.  Perhaps it takes the form of nothing more than an achievement, but can scale all the way to some powerful or uber-rare weapon or armor.

I personally can’t stand when the collectibles are nothing more than the road to another 20 gamerscore…and this from a self-professed achievement hound.  If I’m going to spend hours running around your game finding all of the items you’ve stashed in the environments, it better benefit me significantly in-game somehow.  Otherwise your collectibles feel like nothing more to me than a cheap way of squeezing a few more hours of gameplay into your title.  I mean, I’m going to find them all…but gosh darn it make it less like a chore and more like a rewards system!

I’m a resurrected fan of Destiny; a game that has a trophy-based collectibles system that I think is done about as well as it can be done without it being annoying or feeling like a time-suck.  Scattered throughout both campaign environments and player hubs are dead ghosts – little machines that you “resurrect” upon discovery.  What Destiny got right that I wish others would pick up on:

1) There is exactly one achievement associated with the collectible.  Some of these games go achievement crazy with their collectibles!  Stop it.  One and done.  Is your game about finding these random items, or about the story and the visuals you’re using to tell it?  Because I’ll be honest:  If I’m constantly on the look out for subtle-but-looping flashes of light in your

environments, I’m not taking in the sights or listening to any dialogue that may be going on at the moment.

2) The collectible is unobtrusive.  You just kind of stumble across them.  They don’t announce themselves somehow and they’re not prolific.  Finding one is a pleasurable experience, but it is appropriately short-lived and forgotten about until the next time you stumble across one.  You’re not constantly looking under boulders or trying to jump to ledges that seem (and very well may be) unreachable on the off chance that you’ll find one up there.  You play the game, they pop up occasionally, and they consume neither valuable time nor valuable effort.

The best collectibles are vehicles for rewards beyond an achievement.  I’ve seen them reward all kinds of goodies like XP, skill points, otherwise inaccessible weapons, and even extra playable missions.  This type of collectible has a much better result upon a quick cost/benefit analysis.  You find yourself better equipped and better leveled earlier.  I’m a huge fan of this!  One of the best executions for this type of collectible: Batman: Arkham City.  Things developer Rocksteady Studios got right:

1) Collecting oftentimes requires more than just showing up.  They were interactive!  Sometimes you had to solve a riddle or puzzle, and other times you found that you needed abilities or tools you had not yet acquired.  The point being that picking up the Riddler trophies was a game in and of itself, not just a fetch quest. 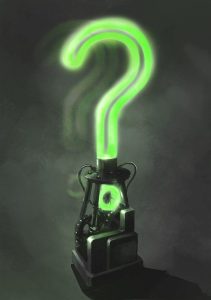 2) Worthwhile rewards.  Experience points for every trophy
meant you beefed up The Bat sooner.  Plus if you collected them all you got the chance to take down the Riddler himself.  And trust me…after you snag the hundreds of trophies, the thing you most want to do is punch the Riddler in the throat.  #justice

3) Rocksteady released a trophy guide app that was beautiful and useful.  This was both genius and a godsend.  Sure, you can find user-generated guides online for free, but for $2.99 you could download an app that a) showed you where each trophy could be found, b) told you what you’d need to do to obtain it (including what skills and tools were required for the job), c) allowed you to easily keep track of which you’ve collected and which you’ve yet to snag, and d) did so with visual flair, leveraging maps straight out of the game and screen caps to make it all dummy-proof.  Some might complain that this totally harshes the vibe of being the World’s Greatest Detective, but I say that Batman himself would have bought and leveraged the app.  He’d be all, “You mean someone has already done all of the detective work, I can have all the answers for $2.99, and spend that much less time wandering around not saving people?  Alfred: Use my Apple ID to purchase the app and sync it through the cloud to my Batphone.”

So what do you think?  Collectibles: Yay or nay?  In your experience, who has done them best?  Worst?

Dungeons and Dragons: I Wouldn’t Touch This Post With a Ten Foot Pole