So the buzz on this week’s mid-season finale of Agents of SHIELD: What They Become has me pretty pumped, as I can’t watch it when it is live each week during the winter. And with Agent Carter taking its place until March, this is going to be an interesting episode to watch and dissect. 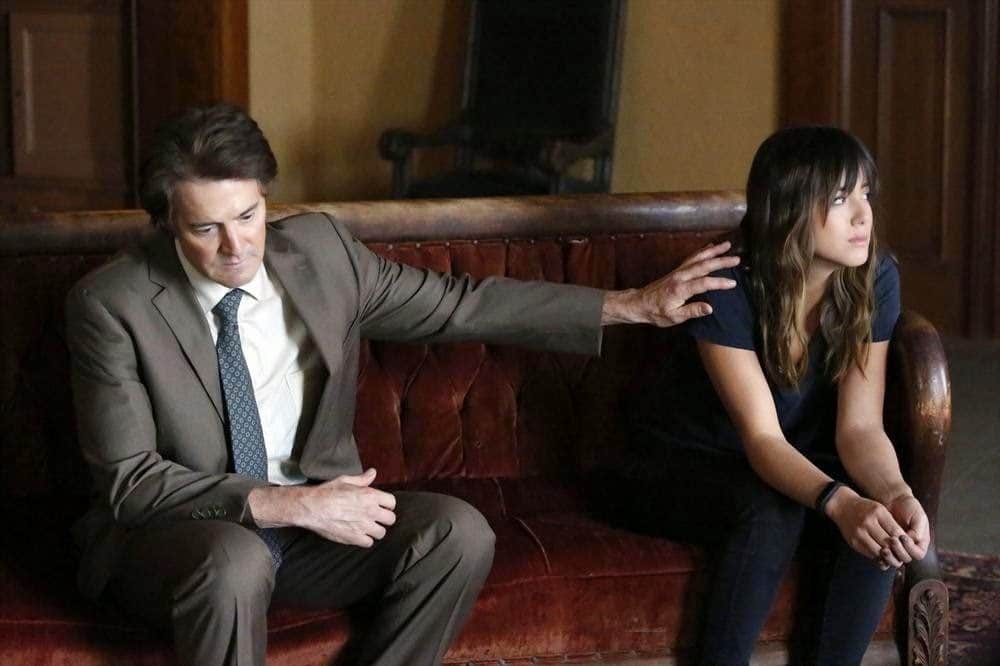 Agents of SHIELD: What They Become begins we see the Hydra plane fly away from the SHIELD plane. Agent May jumps into action, dive bombing the SHIELD Bus into cloud cover, deploying missle deflectives, then cloaking at the last minute.  They then high tail it to Puerto Rico, where May and Coulson try and figure out why Ward took Skye with him.  Coulson then directs Agent Morse to double back to her contact Diego to keep the entrance to the city hidden, putting more value on stopping Hydra than helping Mack.

Agents Triplett and one of the Koenigs go over a plan to use old school detonators to make sure the city falls in, as they don’t want be disrupted by electronic issues.  The problem is that they also have to be set manually.

Fitz and Simmons are working over some possible scenarios that Mack was attacked by the city as part of a watch system, maybe using the same defenses that the Obelisk has exhibited. Simmons proposes that Mack was just enlisted into the city’s defenses instead of being killed.

Morse and Hunter then huddle as she was clearly looking for something in Mack’s garage.  Morse is sure that she has killed Mack but Hunter says that maybe he has survived.  Morse pockets a thumb drive and Hunter calls her out on it, but goes to suit up as her back-up anyways.

Agent May and Coulson are then debriefing what happens, with him praising her for keeping the team alive, even as she just wants to point out that killing Ward, then being blown up may have kept Hydra from Raina and Skye, who they need to enter the city. Coulson talks about how Skye is prepared for the mission at hand, in part because of May having trained her.

Ward and Skye are then shown together and Ward fulfills his promise, introducing her to her father. Her dad makes an impassioned speech, introducing himself as Cal. Skye remains until she calls him out for how she has been kidnapped to be brought to him. He admits that this isn’t the way that he wanted this to go. Skye talks about how all she knows about him is his murderous ways, which he blames on when she was stolen from him as an infant.  That trauma changed him.  He then talks about how things were in her early life in China. He apologizes not being there and not being able to protect her but asking for a second chance to take care of her.  But when she asks for help to escape, he tells her that she is exactly where she needs to be, to fulfill her destiny.

In Puerto Rico, Diego leads Hydra away but not before giving Agent Morse a message.

Skye is being held hostage, as when she tries to leave, her dad says that he doesn’t really work for Whitehall, that he just used Whitehall to find her. He then confesses that her mother was “special” with a gift and that he has brought her here to experience the transformation that has to happen. Skye then pushes to find out about her mom, when he shares that a group of men took her and that he tracked her to Europe, leaving Skye in China.  He found that Whitehall had experimented with her, taking her organs and blood. He then found his wife dead in a ditch.  As Skye’s dad hums a tune, she recognizes it, and he confesses that it is a song that her mother used to sing to her.  When Whitehall summons him, he promises to kill Whitehall for destroying his life.

The plan is in place to bring down the city, with Coulson, May and Trip going into the city to place the bombs with Fitz and Simmons, as Koenig makes jokes about how his brother is recuperating. Coulson orders the brothers back, as Morse calls in the information of Hydra being present and where they are.  When they line up the maps, they discover the Hydra may be going directly through the rock into the chamber in the center of the city.

Whitehall then gathers Ward, Raina and Cal, wanting to know why Skye is present.  He then presents the Obelisk, and Skye has to pick it up, which then glows, before she starts taking people out by touching them with it.  In the midst of the standoff, Whitehall says that he hopes she is as special as her mother.  Whitehall then says that he figured out who Cal was, and Raina says that Ward is here because of love for Skye.  Cal is knocked unconscious and Ward is locked up under heavy guard.

Coulson, Morse, May and Hunter then get ready to take on Hydra and stop their drill while Trip, Fitz and Simmons go down into the city.

Agent 33 and Ward then have a conversation, with Ward comparing his mentor to Doctor Whitehall.  Whitehall is then using some kind of device to eliminate Cal when he tried to attack Whitehall.  Whitehall wants to run experiments on Skye to see if she has the same gift as her mom, aging slowly.  As he is about to start, SHIELD arrives and things break loose.  Ward tries to talk his way out of it when Cal gets the device out of his neck, takes out the guard and then heads towards Whitehall solo.

Trip and Simmons and Fitz then have to split up to place the bombs because it was taking them longer. Fitz leaves the budding lovebirds on one team as he heads in the other direction.

As Cal gets to Whitehall, Coulson puts a bullet into Whitehall, but Cal’s reaction isn’t one of gratitude.  As he confirms that Whitehall is dead, he threatens Coulson, who promises to not let Cal take Skye into the city.  Agent 33 then finds Whitehall’s body, and is clearly distraught.  Cal and Coulson have snuck away during the action and engaged in a battle, when Ward, having freed Skye, turns his back and is met with three shots from Skye.  Skye then stops Cal from killing Coulson and says that she won’t do what he wants, she won’t ever go into the city and that she will make the Obelisk secure.  She then offers Cal a chance to go away.  After a speech and revealing her name to be Daisy, Cal walks away.  Skye quickly tries to help Coulson, crying as she confesses to not being able to kill her dad.  She promises to get the Obelisk and make things better, even as Coulson pleads with her not to.

Agent 33 then finds Ward and the two of them form a partnership and sneak away together.

When Skye finds the empty case, she knows Raina has entered the city.  When Raina finds Mack, he is clearly under control and she directs him to take her to the temple.

Coulson and May figure out what has happened as well. Coulson then goes down into the city to find Skye.  May is given the task of rounding everyone up and getting them out before the city blows.  When he hears that Skye and Coulson are down in the city, he leaves Fitz and Simmons to go to help them.

Raina has arrived at the temple and Coulson is looking for Skye, who has discovered Mack, who she can’t reach.  She promises to come back for him.  Raina and Skye then meet up in the temple.  Trip is hunting the bombs to disable them and he has 3 out of 4 done as Raina gives a speech about how the Obelisk gives new life.  The Obelisk then floats.  Trip disables the last bomb with a second to spare. 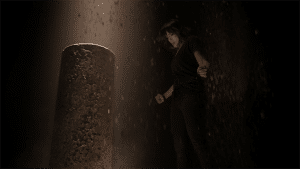 Coulson then runs into Mack and once Coulson has slowed him down, he gets to the Temple as it is closing.  Trip did make it in however, trying to rescue Skye.  As the Obelisk is adapting and growing, Mack comes to Coulson, only to be dropped out of the trance at the last second.  As Raina and Skye are both encased in the kind of material the Obelisk has done all season.  Trip then kicks the Obelisk but not before they are both encased.  Trip is distraught at what he sees and the loose pieces of the Obelisk embedded in him then encase him as well.  But Raina and Skye are then shown to be shedding the material around them.  Skye then unleashes her powers, shaking out of the cocoon and shaking the whole temple, as she sees Trip, mourning his death.

The last scene shows a man with no eyes on a phone call to someone.  He has an Obelisk that is glowing, talking to someone saying to tell the others that there is someone new.

This episode is a fantastic 8 out of 8 nerds.
The highlights: