Christmas is a perfect time to put a little something under the tree for that special geek in your life. But what to buy? Here’s a list of 12 gift ideas for nerds.

This year Dungeons and Dragons released the 5th edition of their rules set, and they are being received to overwhelmingly positive reviews. To make it easier to get into the game of D&D (or get back into it), they have released a boxed starter set that provides everything you need for levels 1-5, plus a set of game dice.

The D&D Starter Set will only set you back $20 and we have a full review for you.

Who doesn’t want a giant piece of art on their wall that is actually a representation of their DNA or fingerprint? Yup, just swap that cheek and DNA 11 will do the rest. They bill it as “art as unique as you are.” You have the option of basing the portrait can be based off of your DNA (if you are the narcissistic type), or you can order a kit for another (if you are a stalker type).

Either way, this is a gift that appeals to the biology nerds in the crowd. DNA 11: Crazy Expensive, but it certainly makes for a unique gift.

A Loot Crate is a month box full of gamer and geek gear. Every month has a theme, then the box arrives in the mail stuffed full of nerdy swag to fit that theme. It might be a zombie box or a superhero box or a box with gear from the galaxy. Whatever the theme, it’s fun to sort through the surprises that are included each month.

A Loot Crate costs about $15, depending on how many months you subscribe for. It’s a great gift to get a nerd, particularly if you don’t know what to get a nerd. Let the Loot Crate surprise them.

Firefly the Board Game (by Gale Force 9)

Firefly the Game does such as good job of integrating the theme of the world Joss Whedon created into the game, that you feel like a leaf on the wind. Game play runs a little long, but what’s wrong with too much Firefly? You can’t stop the signal. From Gale Force 9.

I still hail the 8 bit Nintendo NES as the most wonderful gaming system of all time. It spawned classics such as The Legend of Zelda, Metroid and Super Mario Brothers, to name just a few.

You are the leader of one of the 7 great cities of the Ancient World. Gather resources, develop commercial routes and affirm your military supremacy. Build your city and erect an architectural wonder which will transcend future times!

7 wonders is a simple and addictive game for the whole family. In 30 minutes you can raise a complete civilization and build the greatest Wonders of the World.

It’s only won about a gazillion awards for it’s game play! Available here.

6 Marvel Movies (in one Universe)

Seriously, if the nerd in your life doesn’t yet have a copy of all the movies from the Marvel Universe Phase 1, then this box gift set has 6 (!) full length movies in the first set of the Marvel films.  From The Incredible Hulk, Iron Man 1 & 2, Captain America: The First Avenger, Thor and the Avengers movie, as well as a disc jam packed with special scenes and extra features, this is an amazing gift for the movie lover and Marvel zombie in your life, even if it is a bit pricey! Amazon.

OK, so this isn’t exactly 5 golden rings, but how about you make a wearable LED ring?

eTextiles (or “soft circuits”) are the fusion of electronic circuits to cloth.  Using sewable wiring, you can create all sorts of fun projects like electronic ribbon for your packages or pretty much the nerdiest Christmas sweater ever. But it’s not just for fun, you can make activity or vital sign monitoring wearables. There is an internet full of cool Maker projects for nerds out there.

But how about we start with a $10 LED Ring Kit from Maker Shed? 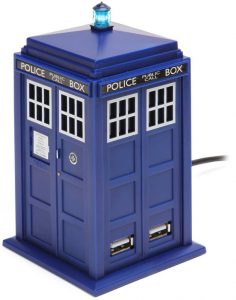 Two things that all nerds more of are Police Boxes that are actually spacecrafts that aren’t confined by the limits of physical space and can also travel through time. The second thing nerds need more of are USB ports. The Doctor Who TARDIS 4 Port USB hub gives a nerd both in one handy little deck top package. Perfect.  $30 from ThinkGeek.

Raspberry Pi is a credit-card sized computer that is built for tinkering. Little nerds can learn electronics and programming skills, while big nerds can build all sorts of tricked out gadgets.

There is mountain of plans, schematics, accessories, and expansions that plug into the Raspberry Pi platform. It really is cool and they sell a variety of starter packages that offer step-by-step guides: Small, Medium, Ultimate.

We have a full list of our top board games picks for 2014.

Everyone is now familiar with John Boyega after they witnessed him in Stormtrooper armor from the new Star Wars teaser trailer. But most people don’t know that he got his start in one heck of a fun Sci-fi movie: Attack the Block. Can aliens take over the world or will they be thwarted by one pesky London block?

You won’t find a debut that’s more fun than Attack the Block, and you can pick up the Blu-ray for under $20.

There you go, 12 gift ideas for nerds. From board games to tinkering gadgets, there are suggestions from a wide variety of hobbies and price points. Now go out there and get something for your favorite nerd.