This Earth Nerd Picks His 5 Best Board Games of 2014

Do you sometimes go outside your friend’s windows and wake them up all romantic like with a boombox? Do you wonder why it suddenly got so creepy in here?

The point I’m getting at is that board games have had one heck of a renascence  in recent years. The hobby game market (which includes board games, card games, and RPGs) has grown, 20%, 15%, and 20%, over the last 3 years, respectively (Source: ICv2). Conventions like GenCon (which started out of the early days of D&D) are drawing record crowds and hundreds of new games and RPGs are released each year.

Here are my picks of the best board games of 2014, and I’d HEARTILY RECOMMEND you pick up any of these games, with the intention of inviting some friends over for a great game night: 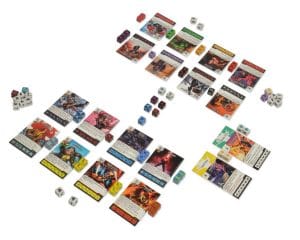 One of the reasons for the resurgence of board games is the highly tactile nature of it, something that is sometimes missed in our digital world. The sound and feel of rolling dice is fun.

Marvel Dice Masters is a game where two players sit across from other at a table. Each player has a stack of beautifully drawn cards of Marvel superheroes (or villains) and they battle it out using custom dice to resolve the conflict.

The great thing about Marvel Dice Masters is that it hits on so many levels: assembling your team of character cards is fun, rolling the custom dice is fun, and the overall game play is fun.

Best yet, the base set is just $15 and boosters packs are just $.99 and come with two new superhero cards, plus their custom dice. (Click the pics to embiggen.)

I call dibs on Emma Frost.

If you want to have a nice laugh while playing a game, then you might want to pick up Cash ‘n Guns, a great party game.

In Cash ‘n Guns (2nd edition), each player takes the role of a gangster and armed with a silly and ridiculous foam gun, you try and bluff your opponents out of a gigantic take of loot. Of course, your gun might be loaded or it could contain a blank, but with only 3 lives, you certainly can’t take any chances.

It includes 8 guns, a couple dozen of characters (each with a unique ability) to choose from, and plays in just about 30 minutes.

In fact, we just had a couple friends over for dinner and a couple games of Cash ‘n Guns. These are the most gentle, compassionate people you’d ever meet, so it was a BLAST watching them play the role of backstabbing gangsters.

The fun comes from the fact that the cards you acquire to power up your deck can come from four factions: The Trade Federation, The Blobs, The Star Empire or The Machine Cult, each of which has a particular specialization. As different cards and combinations are added to your deck, big wild swings can occur, which is part of the fun.

Deck builders are wildly popular, but many – like even the granddaddy, Dominion – can feel like playing a game of solitaire while sitting across from someone, and what, quite frankly, is the point of that? Star Realms is a deck builder with direct conflict. Your goal is simply to blast the other fleet into oblivion.

The best news is that’s it’s only $15 at your local gaming store. Load the photon torpedoes, Captain. 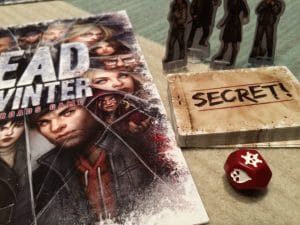 I’d be shocked if Dead of Winter doesn’t show up on nearly everyone’s game of the year lists. I’ve done a full review, so I’ll simply quote myself:

Dead of Winter is also the deepest and most complex game on my list. My primary gaming partner is my wife, and while I often prefer Euro games — the term gamers use for German-style board games that emphasize strategy over chance and generally involve managing resources (Think Settlers of Catan) – my wife likes quick, light games like a couple of the two-player games I’ve mentioned above. 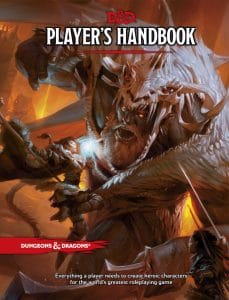 I can’t say enough great things about the new 5th Edition of Dungeons and Dragons and I’ve already said a lot (my first organized play, rolling up a wizard). I really do think they’ve knocked it out of the park with this new edition and I have already reviewed the Starter Set, so once again, I’ll just quote myself:

This edition if the rules is streamlined; the designers have taken the core elements of the game and distilled them down into something elegant and efficient. Gone are layer upon layer of fiddly rules, heaps of +1/-1 slogging, and all the nonsense of the last edition (4e) that made it feel like a glorified miniatures games.

It’s as if the designers wanted you to bring along your imagination and nothing else. It has a wonderful throwback role playing feel to it.

The Starter Set is just $20 or you can download the Basic Rules for free, but I’d encourage you to splurge and pick up the Player’s Handbook for the world’s greatest role playing game.

[There were some honorable mentions: Sherrif of Nottingham is a fun bluffing game, but I’ve only played it once. The same with Imperial Settlers. Five Tribes had potential, but caused analysis paralysis among my group. Finally, I’d giddy excited for Imperial Assault, but the release isn’t going to make 2014.]

There you go, my 5 picks for the best new board game or RPG of 2014. Let me know in the comments which is your favorite new game of 2014!