Board Games: News and Trends from the GAMA Trade Show

The GAMMA RAY show is about to irradiate you with the hottest news in board gaming! You’ll hulk out over these 4 big boardgames announcements and trends from GAMA.

But why is board gaming news from GAMA significant you ask? Well, it’s a Con for retailers, publishers, and distributors, which means that GAMA serves as a litmus test to the games you’ll see in your friendly neighborhood game store in the coming year. As a result, this list is both boardgame announcements and boardgaming trends.

Seafall is the latest game from designer Rob Daviau, best known for the creative and innovative Risk Legacy.

Just about everyone is familiar with regular ‘ole Risk, but with Risk Legacy, Daviau turned a static game on it’s head. Risk Legacy launched a new concept to boardgaming: Campaigning.

At first, Risk Legacy plays much like regular Risk with a few tweaks. What was fresh is that Risk Legacy changes over time based on the various choices made by players. As choices are made players might affix a sticker to a card, then destroy the card that has the other rule on it – and by destroy, the rules mean what they say: “If a card is DESTROYED, it is removed from the game permanently. Rip it up. Throw it in the trash.”

Daviau has Pandemic Legacy releasing soon, but SeaFall represents the first time that Daviau is able to make a game unshackled from a license.

But as you play the game may permanently change with new options opening up to you, just as others may be closed. SeaFall is not Connect 4 where it’s the same frickin’ game over and over, SeaFall will be more akin to a living, breathing board gaming campaign.

It’s not a game that you bust out with different people each time, it’s a game where you gather a group of friends who will come back week after week to play the next chapter in the unfolding story.

Will this single a trend in gaming? I don’t know, but I’m excited to give SeaFall a look when it releases later in the year.

When a company with the success of Fantasy Flight Games says that Imperial Assault was its biggest release yet, you pay attention. 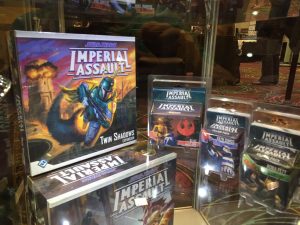 But why wouldn’t it be their biggest release ever? Imperial Assault is a Star Wars board game where you undertake tactical missions with your favorite Star Wars characters.  Best. Thing. Ever.

Not only can you play in one-off skirmishes, but there is a campaign mode as well, played with Storm Troopers, Luke Skywalker, Darth Vader and more. Expansions add Han Solo and Chewbacca.

Well, there are even more expansions coming, with the latest expansion – Star Wars: Imperial Assault – Twin Shadows – being announced at GAMA. With this expansion adding C3PO and R2D2, you better bet it will be at your local game shop.

Additionally, I’m having a blast painting the Imperial Assault miniatures, which gives each purchase a little extra playability.

Related to the news above, equally significant is that Fantasy Flight Games is maintaining the Star Wars license, which is excellent news for the board gaming hobby.

Fantasy Flight has done excellent with Star Wars, both the Imperial Assault and also with the ridiculously popular X-Wing game. To hear that those games will soon be extended through the upcoming Episode VII movie is a major and exciting piece of news.

The board game industry has grown over 20% each year for the past several years, and GAMA is evidence it may continue on that trajectory.

It won’t just be Star Wars titles that will drive board gaming’s continued growth. There are several up-and-coming companies releasing huge games of their own.

Plaid Hat Games is one of them.

Plaid Hat’s first hit was with the excellent Summoner Wars, which is kinda like chess, but with cooler pieces like elves and wizards.  But now Plaid Hat is selling Dead of Winter so quickly that they can hardly keep it in stock. And that will be followed with the SeaFall game we talked about above.

But next in line will be Ashes: Rise of the Phoenixborn, which from the mock-ups will be both a beautiful game and another hit.

There you have it, a few announcements from the GAMA Trade Show, but also some trends and thoughts on the board gaming hobby. 2015 is going to be a good year.

Recap and Review of Agents of SHIELD Episode 214: Love in the Time of Hydra

Board Game Review: Weave a Civilization with Tapestry

Let’s talk board games: An Interview with Jamey Stegmaier of Stonemaier Games

Let’s talk board games: An Interview with Jamey…

7 Reasons Board Game Sales are Soaring