My youngest daughter, Charlotte, is 3’1″ tall and weighs 34 pounds, which is roughly the size of a gnome from Dungeons and Dragons 5e. This can NOT be a coincidence; if you are the height of a gnome and the weight of a gnome, then you must be a gnome.

So for this week’s Lawful Good (read: weekly free D&D 5e content curtesy of Nerds on Earth), I’ve created a gnome NPC for you to use in your D&D 5e homebrews, should you be in need of a gnome, that is. By the way, Charlotte is 4 years old, so this NPC will be 4th level. 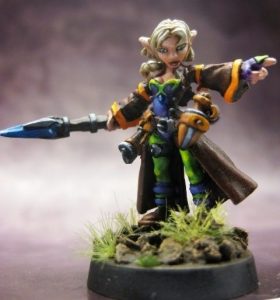 You’ll often hear Charella Mottinsleeves before you see her. Born to two forest gnome adventurers, Charella is an accomplished wizard in her own right, focusing on elemental magic.

Although, if asked, Charella will regale you with a tale from her parent’s adventures, adventuring is not the path Charella chose for herself. Keenly observant, Charella instead seems content to spend time in her lab, surrounded by scrolls and potions, engaged in the latest experiment or project she’s attending to.

Her flaxen hair is always wild as if she just popped out of bed, and her clothing is every color imaginable. With the amount of tiny woodland creatures that are all around, it’s difficult to discern if Charella does her work in a lab, or if it’s actually a petting zoo.

But you’ll always know it’s Charella when you hear a thunderous sound, which shakes buildings, kicks up a puff of dust, and rattles nearby bottles.

If forced into combat, Charella is inclined to use her spells primarily for defense.

For a first action she’ll usually cast mage armor and follow that with shield. Then, there will often be a scattering of woodland creatures, many of which Charella will use in varying capacities, such as viewing through their eyes or stealing small objects.

If pushed to fight offensively, Charella has devastating attacks that ignores protections against thunder damage. She’ll also use her potions and scrolls should the need arise.

In a fight Charella puts survival first. Her potion of invisibility is for just such an emergency.[/column]

Spell Casting. Charella is a 4th level spellcaster. Her spell save DC is 14 and her spell attack bonus is +5.

Equipment. Various scrolls and potions at the DM’s discretion and for the furthering of the adventure. Examples include: potion of healing, potion of gaseous form, potion of growth, potion of hill giant strength, potion of animal friendship, and scrolls for the spells listed above.