After last week’s episode, we have to wonder where Deanna’s intentions are regarding Rick and Co.’s place within the Alexandria Safe Zone. Walking Dead Episode 515 spoilers follow.

So, let’s all start with a moment of quiet reflection that next week’s 90 minute episode is the season finale for season 5 of The Walking Dead.  While we know that the new series is supposed to run between now and next October, I am already experiencing withdrawals.

Now that that’s taken care of, what is going to be the fall-out from Aidan’s death? And when does Rick snap?

The show opens with a scene of mourning from Aidan’s family, as they listen to his Run Mix CD, which sadly was not full of the gangsta rap tunes I was hoping for. When Carol sends over a note and a casserole, Deanna burns the note and leaves the casserole on the step outside. 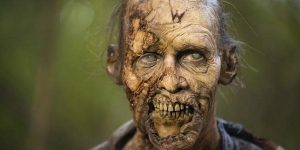 We get a quick scene with Darryl and Aaron out and about in the darkness, when they see a light in the distance.  Later in the episode, we see them investigating in the daylight and they come on a woman’s corpse.  She had been tied to a tree and left for zombies to attack. Darryl confirms that the incident was recent. The woman’s forehead has a W cut into it, which we have been seeing repeatedly.

Back at Alexandria, we see the conflicting accounts of what happened on the run that killed Aidan and Noah, and injured Tara.  Nicholas’ tape is be watched and rewound by Deanna, while Glenn is telling his story to Rick.  Nicholas is lying and Glenn ends his talk with Rick basically saying that the survivors need to make it work, including taking over the runs because the existing Alexandria people are so incompetent.

In the ongoing Rick-Carol-Jessie-Pete-Sam pentagram of doom, Rick and Carol have an interesting conversation where they wind up questioning each other’s motives.  Carol says Sam has told her more, basically confirming the abuse. Rick later has a wierd evening staredown with Pete, where he tells Pete to keep walking.

Michonne is struggling with trying to fit in.  After Rosita gives her a report on Tara (basically no change), the two of them go outside the walls to find Sasha.  Along the journey, Rosita talks about how when the thing with Eugene happened, she lost something but it feels like Michonne lost something when they arrived at Alexandria.  When they find Sasha outside hunting the walkers and after a suitable amount of zombie slaying, they have an argument and Sasha has a bit of a breakdown, in part because she promised Noah he would make it. 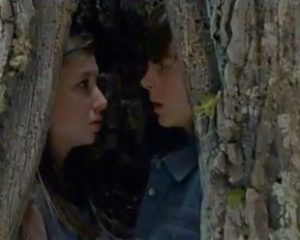 Rick decides the absolutely best time to have a chat with Deanna is at Aidan’s grave. With the quick apology, he jumps right in to the problem with Pete.  Deanna confirms that Pete is the abuser and they have a debate about how they don’t kill people here.  Especially Pete the Surgeon.  She talks about their method of punishment is exiling people.

Outside the walls, Carl proves to be a lousy tracker as he follows Enid, as she knew he was there the entire time.  They chat and then Enid proves to be resourceful, using a kitchen timer to distract the walker that stumbles upon them. Then they later get surrounded and hideout in a tree trunk that is rotting, Carl fails to kiss her and she announces that it is good that he is scared of her like she is scared of him.

Glenn confronts Nicholas and says that Nicholas can’t make runs anymore and that he isn’t threatening him; rather, he is saving him. Nicholas doesn’t take the news well and we see him go and get the gun that Rick had hidden in the blender and lost.

Rick and Jessie finally have a discussion.  She admits that the abuse is happening but says that Rick can’t change it.  She pushes him to ask why he cares so much about what is going on and he admits for having feelings for her.  She tells him to leave and closes the garage door on him.  Rick takes a beat and then goes into the house. Rick tells her that Sam has asked for a gun to protect her.  Pete shows up and after some jawing, a pretty intense fist fight breaks out.  After going through the plate glass window, the whole town comes running. 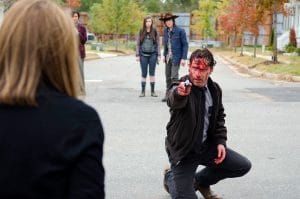 Rick is a bloodied mess.  Pete punches away Jessie when she tries to intervene and Rick punches away Carl.  Rick ultimately draws his pistol and goes on a rant, interrupted occasionally by Deanna.  He says that they have to control who lives in Alexandria, that things won’t correct themselves.  (And all during this speech, it is cut with video of Sasha sniping away at zombies lining the outside wall.)

Rick says that the current way of Alexandria will destroy everything, that they have to fight or they will die. Just as he seems to be reaching his climactic lines, Michonne knocks him out cold from behind, dressed in her constable attire that she seemed hesitant to wear earlier.

A solid 8.5 out of 10 for the Walking Dead Episode 515: Try. It could have been higher except that this feels like it sets up next week more than it does much on its own.