The Glass Cannon podcast is a play through podcast that uses the Pathfinder roleplaying game system, and the Giantslayer Adventure Path specifically.

The Pathfinder RPG system is fantastic, the podcast is hilarious, and the story is driven by fantastic players and a great DM. So I captured the entire gaming group and drug them back to Nerds on Earth HQ, where they were questioned thoroughly, then released (mostly) unharmed.

Clave: There are some heavy themes in the adventure path you are playing – rape, racism, murder – yet you guys somehow are able to continue to laugh throughout the game. Are you guys soulless cyborgs or is something else going on?

Matthew: There are definitely some cyborgs among us. I’ll leave it to you to figure out who they are. No, but seriously, I think there’s a certain joy in the storytelling of it all. Yes, horrible things are happening, but there’s also a wonderful other current at play: of the party forming a family in the story. That horrific action only binds us together.

And plus, we all know we’re going to serve up some serious justice as the game goes on! So those who have been wronged can rest a little easier.

Skid: I’ll go with the soulless cyborg thing! But seriously, we all have really dark senses of humor and we love that stuff. It’s such a fantastic release and one of the things I have always loved about tabletop gaming is the opportunity to indulge the inner sicko in a safe environment. And believe it or not we really have to rein it in to a certain extent for the show – the stuff we joke about with the mics on pales in comparison to when nobody’s listening!

Joe: I just listened to an interesting This American Life episode where they literally analyzed how soon is “too soon” in comedy to make jokes about a tragic event. It was interesting and for me, you can almost never be too soon. I’ll admit that it’s a bit soulless, but I’ve just always been that way.

Of course, I’m an empathetic person in general and endeavor to be serious when necessary, but I don’t believe I’ve ever uttered the words, “[So and so], that wasn’t funny. This is a serious matter.” I’m usually the one that laughs right away, no matter how dark the joke (and then maybe regrets it later). Maybe it’s a coping mechanism?  Either way, I’m not endorsing it as a good practice for people!

But what I will endorse is taking yourself lightly in RPG gaming. I get as competitive as you can get when it comes to games and sports (I hate losing) but an RPG game is different than any other.  If you set out to play it a certain way – focusing on making good story, laughing a lot, and putting your fellow characters consideration as high as your own – you’ll always win. Truly.

And I know for a fact that the dark humor and the goal of good roleplaying and good story is something that all of us on the show share. Otherwise we wouldn’t have put this group together.

Some of these darker concepts will inevitably effect some people more than others. Perhaps they have a life experience that makes the event in the fiction hit too close to home. I can understand that for sure, but, speaking as nowhere near a licensed psychologist, I think that working through some of these issues in a fantasy setting and playing them out from a “character’s” point of view, can be therapeutic. And if you can ever get to the point where you can laugh at the terrible things, I don’t think that it’s running from the problem, I think it’s conquering them.

Grant: I think that humor is a coping mechanism for people who can’t immediately (and/or externally) cope with what they are faced with. I work at a non-profit that deals with life and death situations, and I am often faced with the realities of human mortality, cruelty, and weakness. Calling us cyborgs is short changing the depth of our emotion and sympathy – even though it might seem appropriate given how flippant we can seem!

It’s probably half inability to deal with these situations in real time and half wanting to have an entertaining show that leads to that perception. Also, there have been several situations where Barron has attempted to provide young characters with comfort through gifts. [1]

Clave: Well said. The latest episode [2] had some particularly heavy moments for one PC. I’m assuming each character will get their opportunity to be put through the wringer. What is a hope that each of you have for your characters as the story unfolds?

Skid: I’m just looking forward to seeing how Gelabrous grows as a character. I can’t wait to see how his personality and outlook evolve as his powers grow and his relationships with his companions grow deeper and more complex.

This is assuming he survives very long, which is no sure thing! And if Gelabrous doesn’t survive, I look forward to rolling up a new character.

I love what Troy [3] has been doing incorporating our personal histories into the campaign. I’m not sure if this will reasonably happen for my character since his whole deal is that he’s a fish out of water many thousands of miles away from anyone he’s ever known, but still.

As far as being put through the wringer, I’m excited about that too. As frustrating as it can be in the moment, the harder the life gets on the characters the better the story turns out. Something particularly awful happens to Gel in an upcoming episode – get your popcorn ready! Actually don’t, it will likely ruin your appetite.

Joe: I want Lorc to feel the vigor of youth again. He’s been out of action for so long and I wanted to explore a character that has a rebirth in middle age and is back in the center of the action again. That’s how I started the campaign, and that’s yet to be fleshed out.

The new thing that I wish for Lorc, after having Troy bring this world to life, is I want him to be a representation to the whole country in which he lives, that a half-orc, with a sketchy background and criminial record, can be a champion of justice and order.

I want Lorc to be able to even turn some young half-orcs from being human-haters into joining in the fight against the Orcs and the Giants, thus giving a better name to his race as a whole.

Matthew: I hope we get to learn more of Gormlaith’s backstory (no spoilers here), and how that will affect her ability to fit in with the other PCs. I’m also looking forward to her powers expanding and adapting to the world she’s in. Who knows what wacky magic she’ll learn?

Grant: I hope that Barron gets to reckon with the loss of his family. He has a Peter Parker-esque responsibility: his parents died, but gave him the blueprints to make all of these wonderful pistols. Will he use them for good? Or will he use them blindly in a rage-fueled attempt to avenge his parents?

Also, I know that he HATES that the Orcs have ruined the Dwarves’ attempt at placing order into Golarion. As we get closer to the Dwarven ruins of Koldukar – currently under orc control – we might gain some more insight into Barron’s motivations.

Clave: What else are you guys geeking out on?

Skid: Before I moved to New York I started playing Baldur’s Gate II, which for my money is the best video game ever made. I finished the main game and started on the expansion (Throne of Bhaal), but in the move I lost my save game and I never finished it. This has haunted me to this day. So I finally got the Enhanced Edition and I started a new playthrough. I’m füç&ing loving it. It should tide me over ’til Sword Coast Legends comes out.

Also Troy and I are on book two of the Stormlight Archive books. Really good.

Joe: I’m into Race for the Galaxy right now and just purchased Netrunner, but have yet to play it. I’m excited to try that out.

I’ve been hearing great things from Troy and Skid about Mr. Robot on USA, so I want to check that out ASAP.  I’m about to go on a long vacation and I’m taking Sanderson’s Words of Radiance with me.  I loved Way of Kings, which I finished last year, and I’ve been anticipating reading this sequel for a while.

Do we call Fantasy Football geeking out?  I started a new experimental fantasy league this year that introduces a bunch of new rules and concepts into the game.  So far the experiment has been really fun and the guys in the league are responding well to it. [4] 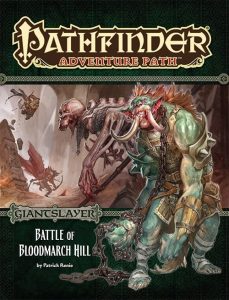 Finally, I got myself a new video game for the fall…Metal Gear Solid 5: The Phantom Pain…so far it’s been absolutely incredible.

Matthew: The books of China Mieville [5]. The 99% Invisible podcast. The plays of Caryl Churchill.

Grant: I work in video, so I geek out all day every day over cameras, codecs, and software. I love my 3DS, and am currently working my way through MGSV and Pillars of Eternity. I should be at Skid’s house for release night of Sword Coast Legends.

Lastly, I geek out about voting rights, and think everyone reading this should vote on election day, regardless of politics.

Clave: Thank you, kind sirs. Now run along and play some tabletop RPGs. The rest of us will be listening to your podcast.

Because there were so many good things said in the interview, I didn’t have the heart to cut it out, so I made a two part interview. Part 1 is an origin story. Also, there is an interview with DM Troy that you won’t want to miss.

[1] Grant works for a non-profit dedicated to the well-being of children.
[2] At the time of this interview, episode 17 was current.
[3] Troy is the DM and gets his own interview.
[4] It does with me, as another website I started was this one focusing on Fantasy Baseball.
[5] I’m reading this one.