Christmas time is a great time to get together with family, eat mounds of delicious food, and play new board games! In past years, we have gathered at my in-laws, usually busting out Settlers of Catan with expansion packs, playing until tensions rise to a volatile level, or until the pie is ready, whichever comes first.

Review of Lords of Waterdeep 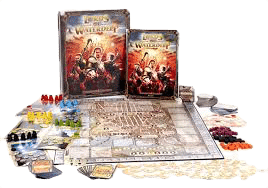 I am basically a board game novice, especially against the rest of our Nerds. I mean, I only played D&D for the first time a couple months ago and I didn’t grow up playing any of these strategic type board games.

Alas, my family was more of a Sorry! type family. So as I have begun to experience games like Lords of Waterdeep more and more, I realize just how much I have been missing out on!

Review of Lords of Waterdeep: The Gameplay

Lords of Waterdeep, in particular, has many layers to it, but the overall game is rather simple: have the most victory points at the end.

The game is limited to 8 rounds of play, so there is a finite end to the game, and average time of play is an hour. As you go round by round, you have opportunities to gain victory points by accomplishing five different types of quests (piety, arcana, skullduggery, commerce, or warfare). To start off the game, each player chooses a faction to represent. This is simply which color pieces you want to play as, with of course a fun backstory which you can embellish.

Each player also gets a card, which you keep secret, and it tells you which Lord of Waterdeep you are. Each Lord has an agenda that is driven toward a particular type of quest to accomplish at the end of the game. This gives you bonus points when the rounds have been completed. 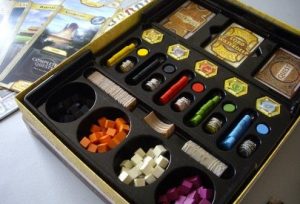 The quests range in levels of difficulty by the amount and variety of resources you need to complete them. The tradeoff, of course, is how many victory points you gain from completing them or if that quest type is being dominated by another player.

So if you can pay attention and see that someone is grabbing as many, say, Piety quests as possible, you could put yourself in a position to block them at some point. However, there is a lot to think about in this game, so maybe your first time through you won’t even realize anyone else has a strategy.

An additional wrinkle to this game would be intrigue cards. This is where the game gets exciting.

When you play an intrigue card, you can manipulate the game by interrupting turns, undoing moves, or even handcuffing other players individually. Needless to say, this is not typically where you gain friends in Lords of Waterdeep.

Another way to not make friends in this game is to take advantage of the castle piece. (Oh, did I forget to mention there is an element of worker placement in Lords of Waterdeep?) If you place one of your agents on the castle of waterdeep spot, you get to go first the next round.  This helps to set up your next round. And who plays these games to make friends anyway?

We played two games on Christmas day, and well, I can at least say I did MUCH better the second time around. There is definitely a lot to think about in this game and you must have a fluid strategy, because no two rounds of this game would ever be the same.

The cards are distributed at random each time, and the order of play can change with each round.  It is not a game for the faint of heart.  This board game novice gives it 9.7 out of 10 Nerds and looks forward to playing again, and again, and again.

You can get Lords of Waterdeep here.

Creating Memorable NPCs: Roll 2d10 and Use this Table of Quirks!