I have a fair amount blind spots when it comes to nerd culture. I confessed one when I admitted my lack of World of Warcraft experience.

However, a few nights ago I got rid of one glaring blind spot: I had never played Dungeons and Dragons before.  Well, there is a first time for everything. Here is my account of that night. (Clave’s Editor’s Note: With corrections from the editor.)

I’ve never seen Clave so excited for anything, ever. (Editor’s Note: This is true.) Jaws was in town on business, so Clave gathered a group of us for a Nerd Night! The fun part of this group is we all know each other through church, so Clave had a little throwback fun for us. Like a good ‘ole junior high lock-in, he had posted an agenda so we knew what to expect and when to expect it.

Clave and Jaws were going to teach us Dungeons and Dragons, then should there be time, we were to move on to Zombicide.  It was set to be a Nerd Night to Remember.™ 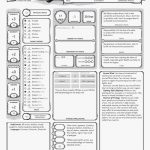 The food and drinks are not what I remember from junior high. No Dew, no Doritos, and we even had veggies and fruit around. And what is this, sparking water? Nevertheless, we had solid nerd fuel. The main course was Chipotle washed down with Ale 8, then proper catching up was accomplished, making it time for some role playing!

At 1st level, Percival wasn’t the best and adding the fact that I was a total D&D noob, meant it was going to be tough sledding for the rest of my team. We started out on a journey and quickly met our first action. (Editor’s Note: We played through the Starter Set.) We took on a group of goblins with little to no trouble, except for an embarrassing javelin blunder by yours truly. (Editor’s Note: Nash rolled a 1, so we played up the ‘critical failure’ for comedy’s sake.)

We still made it out fairly unscathed, then we had to decide which trail to follow. I immediately suggested we split up and was met with looks of disbelief. Apparently you NEVER split up the group in D&D. My bad.

After a little deliberation we decided to follow what we believed to be a trail of men being dragged away from the main road. Using our powers of perception and investigation (Editor’s Note: Skill checks.), we realized that we were on the trail of the men who started out before us on the same journey. 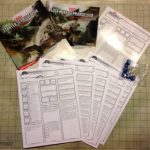 Things were starting to get a little hairy as we entered a cave that made it especially difficult for us humans; Clave, our moderator (Editor’s Note: By ‘moderator’ he meant DM, or Dungeon Master.) described it as “groping in the dark.” (Insert joke about dating life here.)

We eventually made it all the way through our mission with a few more solid junior high boy moments, a couple double entendres, plenty of laughs, and a whole lot of treats.

I also learned a few things about Dungeons and Dragons:

1 – One does not simply play D&D.  You have to commit to this. While the miniatures, back drop, maps, and sound effects from the computer were awesome, the game is about fully getting into the adventure. We tried our best to commit to our characters, use different voices (Clave was the best), and really be part of this world.

2 – You need a balanced team.  Although Wizards are just terrific, you need the full complement of characters at your disposal. You can’t have a team of all fighters or Wizards, you just wouldn’t be able to do it all.  You also should have a very experienced player or two to help newbies. I can’t imagine how it would have worked if there would have been 5 me’s at the table.

3 – It was fun to put the phone down and play interactive games in person. I am not going to go on a long diatribe about unplugging and being fully present, just a short diatribe. Unplug and be fully present once and a while, folks! While we started out the night with our phones out, we eventually all got them tucked away in our pockets and had good old fashioned fun!

I cannot wait to play D&D again! (Editor’s Note: Seriously, give D&D a try if you’ve never played. You can get the Starter Set for under $20.)

Thanks for reading Nerds on Earth. Do us a solid and help us spread the word via the social media buttons around the site.