Remember the Wonder Woman TV series from the 1970s? Even if you weren’t alive when it was first on the air, you know about it. I’m sure you can even sing/hum the theme song.

I can. I know the entire theme song. I used to watch it in reruns when I was little. I wanted to be Wonder Woman. But let’s be honest, who doesn’t?

Now, let’s sit back and think. What female superhero television show is on the air today? I’ll give you a minute to consider this.

Not something about to be released. Because I’m aware of Jessica Jones coming out on Netflix. And I’m pretty excited about that. And Agent Carter, while very awesome and fun, is not a true “has super powers” superhero.

Who have we had in the past 30 years since Wonder Woman has gone off the air?

Now, think about that while I gush about Supergirl and rant about representation.

I was Supergirl for Halloween one year. As I’m sure a lot of 1980s little girls were. She was another female superhero besides Wonder Woman. The little brunette girls would be Wonder Woman and the blondes would be Supergirl. Perfect, right? 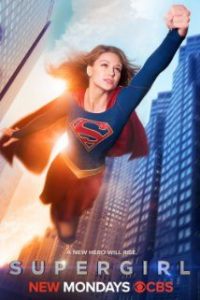 The movie from 1984 was not a success. In fact, it has an a score of 7% on Rotten Tomatoes. That’s even less than the new Fantastic Four movie. And Catwoman. And Electra. And that was 31 years ago. And we’ve had nothing since.

Sure, Supergirl has been seen in The Justice League, the Saturday morning cartoon that I ate up like sugary cereal. She fought with Superman, Batman, and the legend herself, Wonder Woman. She was cute, gutsy, and younger than the other heroes. A perfect character for girls my age.

We have since had a million Batman movies, a half a million Superman movies, and a few Avengers type movies as well. And while those movies have featured a woman in some sort of “let’s kick some butt” role, I have yet to see a movie or TV show with the woman in the title role.

“But you’ve had Electra! And Catwoman! Get over it! Be happy you’ll get the Wasp in the Ant-man sequel!”

No, I shan’t! They pushed back Captain Marvel for me to have another movie about a while male superhero.

When I saw the trailer for Supergirl I got so excited. It looks slightly campy, it’s true. But what TV show about a superhero isn’t? But this is a show about a young woman who decides to be a hero. She may make mistakes. She may only put on glasses to hide her secret identity. And it may be too cheesy for words.

But I am beyond stoked for this show.

I’ve had some guys tell me, “It looks stupid. I won’t watch it.”

And I get slightly angry. Why did we get a TV show about Green Arrow before Supergirl? Why did the Wonder Woman show they tried to start years ago completely bomb? Why was Birds of Prey so…not what it should have been? Why don’t people put enough time and effort into shows and movies about female superheros?

[divider]What do I want from Supergirl? [/divider]

First: I want a successful female superhero show. I want it to run as long or longer than Arrow.

Second: I want people to fall in love with the show and Supergirl herself. I want her to become an icon again. Not a joke.

Third: I want this show to pave the way for others like it. We have all seen the list of upcoming movies for both DC and Marvel. We’ve got Captain Marvel and Wonder Woman movies coming soon. But what else could there be if this show and those movies are hits? Will we see little girls dressed as Supergirl next Halloween like we did in the 80s?

[divider]What do I expect from Supergirl? [/divider]

Will this show live up to all these expectations? I have no idea. Will it be the hit that we need and want? Again, no clue. But it could be. And it should be. They’ve had over 30 years to perfect the formula. Wonder Woman did fine. And the world was a different place when that show was on the air. The nerd population is not just men. Women are becoming a stronger and louder voice in geek culture. And we need to be heard.

So, back to the original question. Who have we had in the past 30 years in television shows? Of course, we’ve had Xena and Buffy. Those are the first two that come to mind. We’ve had awesome female characters like Scully, Rose Tyler from Doctor Who, Veronica Mars, and the Halliwell sisters from Charmed. Now, how many of these ladies are actually comic book superheros? Sure, they’ve all had a comic book written about them. And they’ve been awesome comics. But they didn’t originate in the comics.

Supergirl did. Wonder Woman did. So, did Black Widow. Just like Superman and Batman and Thor. But where are the ladies’ movies? Or TV shows?

It has begun. Again. Let’s keep it going this time.

Come on, Supergirl! You can do it!