After last week’s stellar season 6 premiere of The Walking Dead, can the show maintain its momentum with episode 602: JSS? Or more importantly, will our Walking Dead season 6 predictions turn out to be accurate?

The Walking Dead episode 602: JSS opens with the kind of cold open that they have used before to great success, a slow follow of the character Enid, who you may remember as Carl’s sort of love interest from last year. In the clip, we see her at various points in her life before she came to Alexandria: a moment when she and her parents are surrounded, a moment where she eats a turtle raw, a moment where she is covered in blood moving into Alexandria.

And along the way, we see the initials that become the title of the episode: JSS. 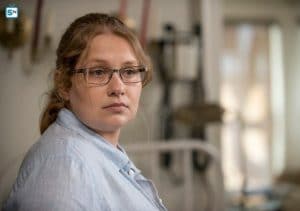 Coming back, the show spends the next quarter of the episode establishing what is happening in Alexandria;

And then all hell breaks loose.

The next ¼ of the show is about the Wolves attacking the townspeople of Alexandria and brutally killing them with lots of weapons that aren’t guns. The lack of guns serves to make these attacks even more savage to us as viewers and serves to show how unprepared the Alexandrians are to survive in this world. We see things like a man get killed and thrown off the wall with a gas bomb, a housewife gutted and bleed out on her porch, random people hacked to death. 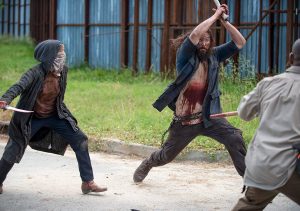 But the people who know best and longest on the show don’t go down without a fight:

Towards the end, Rosita explains to the Alexandrians that the world only works one way now: you better have something worth dying for. And Carl has found a note Enid has left and we get the answer to what JSS is: Just Survive Somehow.

Some notes on this episode:

So what is upcoming?

Next week’s preview looks to be shifting back to what do happens when the horde is drawn to the horn and how Team Rick and company deal with that.

10 out of 10 again this week. Seriously, I don’t know if there is a smarter or better told story on television right now.