After our painful suffering through a summer and the less than spectacular Fear the Walking Dead season one, it is time for the original series to return. Can Season 6 be the redemption that we so desperately need? 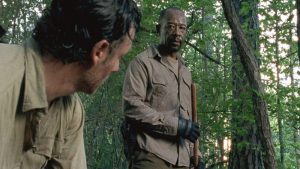 Walking Dead episode 601 is done in two timelines, and the use of black and white and color to separate them make for a compelling episode. In essence, we have the backstory of what happened from the time Rick and Morgan were reunited, right after he killed his main nemesis at the very end of season 5 and what it got to here.

In essence, we see people adjusting to the Rick Grimes as field general of their little town. Some people seem to be okay with it and some, especially a man named Carter, seem to really dislike it. Throughout, we get reminders that there are tons of tensions that will be resolved and dealt with. When will the original crew ever forgive Gabriel? Since Glen spared Nicolas’ life, how will that dynamic play out?

The day after the deaths at the meeting, we see Morgan and Rick catching up with each other. They come across Gabriel and another man digging graves. They decide to take the bodies somewhere else, after Abraham moved them immediately after the meeting. Deanna approved it but Pete’s son decides he need to follow them, to see where his dad is buried. In the midst of following them, he gets followed by walkers and they discover an enormous quarry full of walkers.

Rick later goes back and decides that this swarm is a threat and makes a proposal that they move the herd far away from Alexandria. Carter, a man who helped Reg to build the walls, greatly opposes him; this conflict escalates over the course of the episode, serving as the main “man versus man” conflict.

In the meantime, Tara wakes up, a bright glimmer of hope that is snuffed out when he mentions wanting to have Noah around to protect her. (Moment of silence for Noah.) Later, Eugene meets others who have returned from their search mission and we meet Heath for the first time. 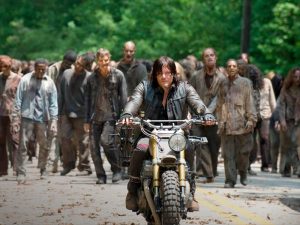 Glenn partners with Heath and Nicholas to clear out a tractor store that has somehow been filled with zombies, because they would pull the herd away from the path they want them to be on.  Sasha and Abraham in a car, along with Darryl on his motorcycle are the noise, leading the walkers away.

As they work the plan, Carter still clearly isn’t on the same team as Rick, which hits a climax with him holding a gun on Eugene, who stumbled on a meeting where he overheard Carter propose killing Rick. Rick disarms Carter and after a long time doesn’t kill him.

This leads to a conversation later with Rick and Morgan, where Rick explains that he didn’t kill Carter because Carter is the kind of man who won’t survive in this world. And this foreshadows that their plan goes amuck and Carter does get bitten. As he is screaming, Rick comes up and kills him. This clearly is disturbing to Morgan and Michonne, but they also seem to understand that it was necessary.

And just as they have silenced Carter’s screams, a very loud, very obnoxious horn sounds, drawing the herd towards Alexandria as the episode ends.

This episode is a solid 10 out of 10. (If for no other reason than it saves us from Fear the Walking Dead.) 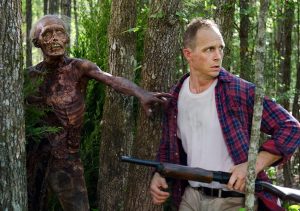 Some things I would highlight;

So, what are you looking forward to this season? What was the best part of the season 6 opener?