After last week’s bloody confrontation between Rick and Pete, how is the balance of things in Alexandria going to be upset? Worse, what things will we be stuck wondering about for the whole summer? Walking Dead Episode 516 spoilers follow.

The episode opens up with the first delightful surprise of the season: Morgan!

Morgan is approached by a new person who seems to be a part of a group called the Wolves, we realize, because he talks some gibberish about wolves, people and history.  It becomes apparent there is a fight coming and Morgan goes Book of Eli/TMNT Leonardo and whoops some tail with a walking stick, depositing the beaten guys in a car, only to honk the horn and walk away. 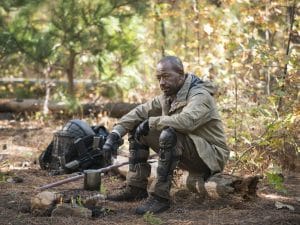 In Alexandria, Rick is in lockdown with a very pissed Michonne.  In the course of the conversation, Michonne talks about how she knocked Rick out not to save the town, but to save him. Carol and Rick confess to their takeover plan if needed.  And they have two guns left.

Aaron and Daryl are doing their job, which is scouting for Alexandria’s new population.  They are following a man wearing a red poncho but lose him. When they find several trucks that look to be carrying food, they inadvertantly set off a trap, releasing 3 truckloads of zombies.

In the fight to get out, they wind up stuck in a car.  Daryl lights what appears to be his last cigarette and tells Aaron he will make the sacrifice of going out first and being the distraction. Aaron refuses to let him sacrifice himself and just as they decide to fight their way out, Morgan swoops in and the best trio of the Walking Dead goes forth, taking care of business.  When it is over, Daryl sees Morgan’s map from earlier this season with Rick Grimes’ name.  (And the 3 will show up at the end of the episode.)

In Alexandria, Deanna has decided to have a town hall type meeting where everyone can discuss the incident.  Maggie has major concerns and shares them with Reg and Deanna before huddling up a meeting with Glenn, Carol, and Abraham.  The essence is that they are willing to do whatever is needed if the conversation goes south.

Then we get to the major plot of Glenn.  We see Nicholas ready his stolen gun and go out over the fence. Glenn follows him and we never much get a reason why.  (Let the boy wander off and get eaten; why stop him?)  This leads to a sequence of Glenn being shot, Glenn avoiding Nicholas, a couple fist fights and a scene where Glenn is left to be surrounded by zombies, only to fight his way free to ultimately save Nicholas and drag his sorry butt back towards Alexandria. Why Glenn? More on that at the end. 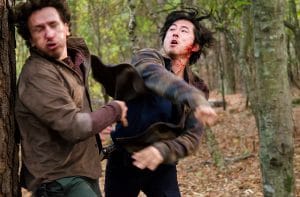 Eugene is faithfully sitting beside comatose Tara’s bed when Abraham comes to visit and Rosita forces the conversation between the two of them that is a long time coming. It ends with Abraham and Eugene having made peace.

So, Gabriel. The semi-priest wanders out in a really white shirt and seems to be wanting to commit death by zombie.  He fails in his effort, killing his walker attacker. When he returns back to the town, he purposefully doesn’t lock the gate, which plays majorly later when Rick realizes zombies are running loose during the town meeting.

And, Sasha.  I bring her up here because she seems to be the flip side of Gabriel. Deeply damaged and trying to make sense of it. There is an uber-creepy scene where Sasha lies down on a stack of dead walkers.

Gabriel and Sasha wind up at the church at the end and come to blows, with Gabriel first blaming Sasha and her crew for the evil that has happened until ultimately admitting he is to blame. Their fight comes to an end when Maggie shows up and leads a prayer meeting, with the three of them holding hands in a circle. 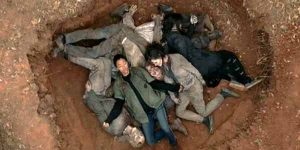 The town meeting is what you’d expect. The long term Alexandria people seem dead set on the idea that Rick is evil and needs to be exiled. They double down when Deanna says Gabriel called them devils of light.

That is until Rick shows up with a zombie corpse, saying that all he wanted to do was to protect them. It is great speech that ends with Pete showing up with Michonne’s katana, accidentally killing Reg who was just trying to be the voice of reason.

A weeping Deanna tells Rick she will do it his way and Rick kills Pete. We episode ends with Rick staring at the just approaching Morgan, Aaron and Daryl.