By Clave Jones On Mar 31, 2015 Last updated May 22, 2016
Share TwitterReddItPinterestFacebookEmailPrint

If you are fleeing Cloud City while being pursued by Stormtroopers, what do you do? I mean, really, WHAT DO YOU DO?!?! 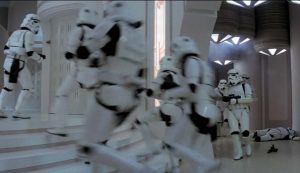 Leia Organa, Lando Calrissian, Chewbacca, C3PO, and R2D2 found themselves in just such a pickle during The Empire Strikes Back. Luke Skywalker was locking sabers with Darth Vader and Han Solo was a frozen carbosicle, so our merry band of Rebels needed to make a getaway, and fast, because more Imperials were on the way.

Spoiler alert, they made it. But what can we learn from their harrowing escape through the corridors of Cloud City? Let’s analyze what went right and what went wrong, all for the purpose of learning the best tactics for escaping the tibanna mining cities of Bespin, should we find ourselves being pursued by Stormtroopers.

If you find yourselves in a close quarters urban environment and you are looking for a quick escape, the first thing you do is look to evade, not confront, your pursuers.

This requires you to move without detection, tactically and silently. The fundamentals:

So how did our Rebels do in this regard? Well, C3PO is not known to excel at minimizing chatter, which dramatically decreased the likelihood that they could evade detection by the Stormtroopers. Further, C3PO was a non-secured loose item that was rattling about on Chewbacca’s back.

For heaven’s sake, Chewie couldn’t even get up the ramp of the Falcon without banging c3PO’s head off a running light.

So if evasion isn’t possible, then your next strategy should be to maintain distance between you and your pursuers. Maintaining distance gives you increased reaction time, increased options in use of force (no, not the force) and finding cover, plus it gives you more team members and weapons on the approaching threat. This is where our band of Rebels excelled. Let’s walk through the steps.

Proper Escape Tactics While Being Pursued by Stormtroopers 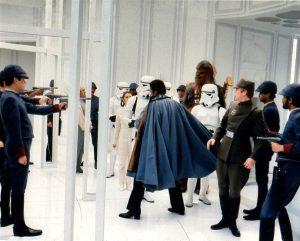 First – aided by Lobot – the escort of Stormtroopers were subdued, giving our heroes valuable time to create some distance between them and any future pursuers.

The lesson learned? If you aren’t at this very moment out networking a portfolio of assets, then you may not be prepared should you find yourself being pursued by Stormtroopers. Lando’s network of allies and compatriots was the very thing that opened up any opportunity of escape. You’ll need to ultiize your friends tactically should you ever find yourself escaping through corridors in a dense urban environment. One rarely escapes Stormtroopers alone.

Second, Lando made a brilliant tactical decision when he broadcast over the intercom that more Imperials were on their way, urging all Cload City occupants and personnel to immediately evacuate. The resulting panic and confusion help create a necessary diversion which slowed the pursuit of the Stormtroopers.

Remember your training. Should your voice be trained to offer up smooth, sultry sounds like Lando Calrissian, you should use that to your advantage in escaping Stormtroopers. Lando did the equivalent of yelling fire in a movie theatre, but if you don’t have a voice that oozes ice cold Colt .45, then maybe knock down some trash cans, shopping carts or Ugnaughts to slow pursuers. Lesson learned: Create or use associated panic as a diversion to create distance between you and your Stormtrooper pursuers.

Thirdly, R2D2 was hit or miss when it came to slicing open doorways. It didn’t work a first time, but did a second. Luckily, Lando knew the layout well and was able to quickly reroute our plucky Rebels. Lessons learned:

Fourthly, R2D2 was the unsung hero (Isn’t he always?) during the escape when he unleashed a smoke screen, blinding and confusing the Stormtroopers. The Rebels had zero cover as they dashed from the winding corridors across the hanger platform and up the ramp of the Millennium Falcon. The precision shooting of the Stormtroopers surely would have cut them down had it not been for quick thinking by R2. Lesson learned: Don’t be afraid to lean on the quick thinking of your R2 unit.

Finally, the Rebels simply shot more accurately. Despite Stormtroopers being trained to be the most accurate marksmen in the galaxy, the didn’t record a single hit. The Rebels, on the other hand, despite shooting on the run and behind them, took down nearly a dozen Stormtroopers. Surely, the Force was on the side of the Rebels.

There you have it, a textbook example of how to escape from Cloud City while being pursued by Stormtroopers. Create some distance, utilize allies, sow confusion, know your surroundings, have an R2 unit, and fire more accurately than Stormtroopers. Easy.

But what if you follow the dark side? What could team Stormtrooper have done differently?

Proper Pursuing Tactics for Use by Stormtroopers Who are Chasing Rebels 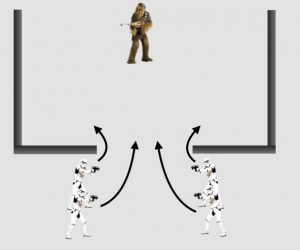 The wide entry points allowed for a split team entry, which the Imperials’ finest should have taken advantage of. During a split team entry, Stormtroopers would have positioned themselves on opposite sides of the doorway, which would have given them a greater view of the upcoming hallway and better angles, plus the retreating Rebels would have been put at a disadvantage because Chewie would’ve had to make a decision about which target to engage.

Of course, the pursuing Stormtroopers at one point had to ascend stairs, which put them at a tactical disadvantage and their religious zealot general was off chasing his long abandoned son, so we should cut them some slack.

In closing, it’s a serious situation when Stormtroopers are pursuing you through the corridors of Cloud City. Should you ever find yourself against a legion of troopers who use proper tactics, then I only have one thing to say, which is ‘May the Force Be With You.’

Recap and Review of Agents of SHIELD Episode 215: One Door Closes