Several weeks back I tweeted about my new and impending Dungeons and Dragons campaign (rocking my lightfoot halfling rogue Viag, and guest starring the wood elf monk/ninja Shifukato that I built for a friend).

As I posted excitedly about the upcoming adventure, someone started talking back. Experience Points (@XPwebseries) must have been trolling #dnd or #dungeonsanddragons. They found my tweets and wished me all the luck in the realms. They followed me. I followed them right back.  I’m courteous. 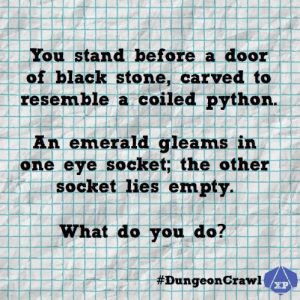 A few days later, I was scrolling through my feed and saw several posts that caught my eye: Black typeface on graph paper with messages that whisked me back to my days spent playing text adventures. Turns out I just missed out on one of Experience Points’ #dungeoncrawls.

They advertised their next crawl the following day, so I grabbed my character sheet and my set of dice and joined in the fun. Afterwards I asked them to answer a few questions for us here at Nerds on Earth. I figured some of you might appreciate giving your characters some play between campaign settings.

Adkins: Tell us some about #dungeoncrawl. How does it currently work and what are your future hopes for the experience?

XP: #DungeonCrawl is an experimental live tweet adventuring game. We honestly conceived the idea very piecemeal, when trying to brainstorm ways to interact with our followers. What started as a few random tweets kinda exploded into several dozen people, interacting and exploring this impromptu dungeon we’d thrown together – very exciting, but also very unexpected.

In its most recent iteration, a #DungeonCrawl would begin with us tweeting a description of a dungeon chamber and prompting our Twitter followers the fateful question “What do you do?” From there, we would guide our impromptu players through the dungeon, quoting their tweets to deliver descriptions and reactions to their skill checks and attack rolls.

In future iterations, we’re hoping to cut down on the clutter that this method – the quoted tweets – was inflicting on our follower’s feeds. Not quite understanding the ramifications of this when we got started, we’re experimenting with a new method that should keep the feeds much clearer in future.

Adkins: Is the #dungeoncrawl experience meant to be played in a vacuum (you’re on your own), or are players encouraged to watch the feed and respond/react to other players’ actions a la a party system?

XP: During the first #DungeonCrawl, we assumed each player was on their own, exploring the environment in a vacuum. Some clever players, however, started to piggyback off information discovered by other players and thusly, we’re toying with incorporating more of a party dynamic in its next iteration.

[Side note from Adkins: I was one of the “clever players.” Viag is chaotic neutral, guys. When he sees tweets in which other characters are taking 5 poison damage for their actions, he takes notes to avoid 5 poison damage.  Also: When someone else opens a door, Viag walks through it right behind them.]

Adkins: So far we haven’t experienced any combat as we wind our way through the corridors and search rooms. Will that change somewhere down the line?

XP: The first dungeon didn’t feature any combat. Without revealing too much, it’s something we’d definitely love to feature in the next crawl and something that, again, would strongly benefit from a player-based format.

Adkins: From your perspective, what is the potential reward for participants in #dungeoncrawl? What is in it for the players?

XP: By participating in #DungeonCrawl, our followers will hopefully get a little vicarious roleplaying thrill in between their regularly scheduled games. Obviously, given the venue, we can’t emulate a real tabletop experience, but we hope that the brief little excursions can provide an hour of entertainment or so to our followers.

[Side note from Adkins:  I’m new to D&D, so I get a good bit of value from applying creativity to the situations posed and even watching how others are navigating the same.]

Adkins: Your website teases a different kind of Dungeons and Dragons actual play video series. What are you all planning to do that will set you apart from the rest of the options out there? When can we expect to begin the adventure with you?

XP: It’s funny you should mention that – #DungeonCrawl is kinda a small sideline, to help raise interest for our real project – Experience Points. A 12-part scripted webseries coming in 2016, XP follows an average three-hour session in one campaign and seeks to combine the authenticity of the actual play podcast with the accessibility of a scripted TV show. Think Critical Role meets The Guild.

What XP hopes to accomplish is to showcase a genuine tabletop experience, with none of the tired stereotypes that most TV shows or films saddle the game with, but not to inundate the audience with daunting runtimes and inside jokes between players. Hopefully, Experience Points can blend the strengths of both genres of tabletop-themed content.

The series is due to release in 2016. Until then, though, stick around our Twitter for lots of adventure hooks, DM Tips and #DungeonCrawls, including a big marathon session we’re planning to run for Halloween. Looking for a hint? Demeter.

Keep your eyes on @XPwebseries for future #dungeoncrawls!  They also give tips for DMs (via the aptly named #DMTip), hooks for your campaigns (#RPGHooks), and my personal favorite: #shitplayerssay.

You can check their website out here.  They also have a Youtube channel which at the moment only hosts the teaser (which you should totally watch), but will also eventually be where you can find the future episodes, so go ahead and subscribe so you won’t miss out.

We could always use a little bit more D&D in our lives, amiright? Add Experience Points to your social media rotation and scratch that itch!

Recap and Review of Agents of SHIELD Episode 303: A Wanted (In)human