I don’t know Greg Rucka. I’ve never met him. I can’t speculate as to his intentions or his motivations. All I know is his work–and that work has some of the best characters in comics. Most, if not all, are females. And you better believe they’re strong. 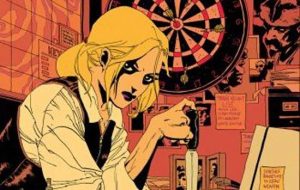 And that’s exactly it. That’s the big deal, that his characters are people. The fact that they are women is incidental to the fact that they are competent and capable. None of these women are simply eye candy, or damsels to be rescued by the hero, or background props. They are strong, powerful characters that happen to be women, and that’s rare enough in any medium. But it’s especially rare in comics. 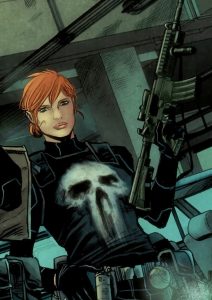 But that isn’t quite the whole story, not all of it, because Rucka’s ladies aren’t just male characters who happen to be women. Does that make sense? Think about it like this–there’s that show, Elementary, right? Where Watson’s a lady? Now, this isn’t about that specific show, but bear with me. Imagine they had written the role of Watson for a dude, but then Lucy Liu came along and they just had to give her the part. Now imagine they didn’t change a word of the dialogue, that lady-Watson had the exact same lines and actions as the ones written for a man. There’s no doubt that her character would be strong, and competent, and all the other adjectives I threw around, right? But it wouldn’t be true. Making strong female characters isn’t just a matter of swapping the sex and changing the name, because men and women approach problems differently. They think differently. They have their own sets of challenges and advantages, and to wipe all that out in the name of narrative equality is wildly missing the point.

That’s not what Rucka does. His ladies are strong women, but they are also strong women. Rucka ties their femininity to their strength in a way that sets him apart from his peers. His Batwoman isn’t a Rule 63 Batman–her story (being discharged from West Point in violation of “Don’t Ask Don’t Tell,” and her subsequent relationship with Renee Montoya) is inextricably tied to her womanhood.

Whiteout wouldn’t be the same if Carrie Stetko wasn’t the only woman in Antarctica. When he wrote Punisher, he didn’t kill off Rachel Cole-Alves, he killed her husband, exploring the inverse of the events that drove Frank Castle to his life of…well, his life of super-murder. Whatever you want to call it.

Rucka’s comics are about so much more than just showing that women can punch, kick, and shoot just as well as men. It’s about making sure these are not heroes first and females second, but that they’re female heroes. And sometimes, creators can get so tied up making sure we know that they know the character is a woman that they take it to absurd extremes. That’s why for every Jessica Jones and Imperator Furiosa, there’s an awkward romance between Black Widow and Hulk to try and remind audiences that Natasha is tough, but not so tough that she doesn’t care about having children.

A video introduction to The Old Guard #1, new from Image Comics