A town guardsman walks into a tavern. He sees a shop owner being served some dwarven ale from the bar maid. A town guardian… a shop owner… a bar maid… EUREKA! You’ve identified 90% of the D&D village NPCs who are used to dispense information or queue up quests in D&D adventures.

But should you want to add a little professional flavor to your Dungeons and Dragons townsfolk, here are 12 medieval professions for you to sprinkle in for your PCs to meet. All you need to do is roll a d12.

1. Miller A miller is someone who works in a mill, which is straightforward enough. Mills of the era would pump water and grind grain. If it wasn’t a water mill, a wind mill, or a mule-powered mill, a miller may have used a quern-stone, working entirely by hand.

After grinding flour, a miller may have also served as the town baker. Maybe your PCs need a fresh baked loaf of bread. Or perhaps they are tasked with delivering freshly milled flour to the Lord’s court. Heck, even the tavern needs a flour delivery.

2. Napier A napier is the person who manages royal linens. Obviously, a job that specialized means this wasn’t a job held by a huge swatch of the population, but someone needed to attempt to fold the King’s fitted sheets.

When I think of PCs interacting with a napier, I immediately think espionage and hijinks. It’s cliché to infiltrate a castle via the sewers. How about paying off the napier instead? Then tie some bed sheets together for your escape! 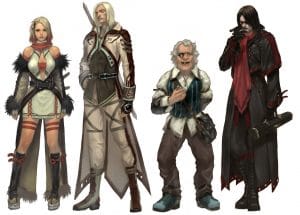 3. Haberdasher A haberdasher sells small buttons, which is both practical and stylish. The PCs both stay “buttoned up” as well as adventure in confidence, knowing full well the button will keep their britches held up.

But what if your campaign’s haberdasher is secretly a wizard, who imbues his buttons with magic that allows PCs to “see” through the button. Suddenly, you have a medieval spy gadget that James Bond would be jealous of.

Of course, the haberdasher could simply be the favorite NPC of the party’s flamboyant bard who needs a steady supply of buttons, ribbons, bobs, and zippers.

4. Lighterman A lighterman ferries goods from ships to shore, a role that is critical for shore towns where the water may be too shallow for larger ships to come fully into dock, or if goods might need to be shipped in a more “secretive” manner.

A lighterman would operate a lighter, which is a small flat-bottomed barge on which crates, barrels, and the like could be loaded. A lighterman would often navigate the shallow waters with a 10′ long barge pole, which would be jammed into the water’s bed to “shove” the barge around, directing it.

If this sounds familiar, it is indeed where the phrase “touch it with a ten foot pole” came from and D&D once famously featured a Ten Foot Pole. A lighterman would make for an interesting NPC in a variety of situations.

5. Milliner A milliner is a designer and maker of hats. And D&D characters need fine hats.

It is thought that the term milliner probably derived from Milan, a city known for its fashion. As a result, most milliners were female and they often sold fanciful hats for women and children, although they also designed, made, and trimmed hats such as top hats and fedoras.

Milliners would often operate out of a millinery shop, which would also sell handkerchiefs, scarves, cloaks, shirts and undergarments. As a shop owning NPC, the milliner could both outfit the PCs as well as create disguises and help them inhabit new roles, such as impersonating a nobleman.

6. Scrimshaw A scrimshaw carves bone or ivory, which could give a scrimshaw NPC a decidedly different tone than that of a miller or haberdasher. A scrimshaw is known for their beautiful handiwork in the form of elaborate engravings and lettering in the tusks of walruses or bones of whales.

A scrimshaw NPC could inspire you into a whole new Norse or Inuit setting, or she could be set in your typical medieval setting, carving in simple bone. This could mean a witch doctor working in bones or a necromancer carving runes. Regardless, a scrimshaw would make for an interesting NPC for your D&D campaign.

7. Stevedore A stevedore is a dock worker, and rather you call him a stevedore, longshoreman, or wharf rat, he is a manual laborer who unloaded and loaded goods on a waterfront. Obviously, a stevedore couples well with a lighterman.

The obvious utility in a D&D campaign is to use a stevedore as a rough, salty NPC, who may simply serve as a brute. But what if this NPC goes against stereotype and the stevedore NPC is a thoughtful, contemplative soul?

8. Vaginarius A vaginarius is a scabbard maker. It’s an old trade, but it’s easy to visualize a vaginarius being a NPC that PCs frequently interact with, as sheaths and scabbards are always in demand by adventurers. What more needs to said?

9. Vintner A vintner is a wine merchant.

Do you have a dwarf in the party who loves his ale? Well, maybe a snooty vintner can challenge the dwarf’s taste in spirits. In this scenario the vintner serves as an interesting NPC for the party, while also opening the door to some funny role play when the dwarf scoffs at his fine wines.

10. Bather A bather is an owner of a bath, obviously enough. Certainly you’ve thought about how bad the adventurers must smell after a long day of gutting kobolds, so why not have them visit a bath.

Community baths were a big part of ancient Greek and Roman culture, so why not bring them into some of the Forgotten Realms favorite cities like Waterdeep and Balder’s Gate.

But is he a simple bather NPC or is he perhaps a alchemist who mixes the scents of soaps and the composition of bath oils to further a secret agenda? Or maybe the bath simply serves as a convenient gathering spot, substituting for the tavern as PCs interact with NPCs in a more open state of nudeness.  Regardless, a more interesting NPC than yet another town guardsman.

11. Accoucheuse An accoucheuse is a midwife. It’s a girl! Or maybe a boy! So how about having your PCs interact in the celebration of a birth?

An accoucheuse would make for an interesting NPC individually, but there are also other medical-based medieval professions that could join with the accoucheuse to really make for interesting interactions.

Even better, maybe all these odd medieval professions can be the same NPC that walks stall to stall because he’s the town entrepreneur and does a half dozen of these professions part time. That could make for quirky fun, having the same NPC show up in multiple roles!

Speaking of quirky, make sure the NPC has an interesting personality to go with their interesting professions. Here’s a table you can use to help give your NPC personality.

And here are some other professions to help you bring your D&D town to life with interesting people and places. I hope these additional professions provide a spark for just such a thing. The point is that the bar maid is classic, but it’s been done. So bring a little flair into your D&D game.