Awhile ago in a series of posts, we looked at current comic book series that could potentially turn into the next television hit. Some of what we talked about has even become true, as Preacher has made it onto television. (I still got everything crossed for Lazarus to make it. It would be the best.)

One of the other series that nearly always pops up in this conversation is the comic series Chew, written by John Layman and drawn by Rob Guillory. The uniqueness of the story and the potential to bring it to television in a profound, yet not expensive way, is what Chew such a potential target for a comic-to-television series.

What could be the next Walking Dead: The comic series Chew. 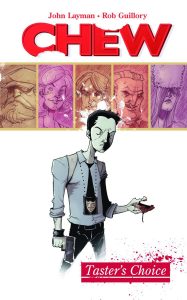 Chew is set in a near future world that isn’t that much different from our own. The major difference, after a massive avian flu that killed millions across the world, chicken and all other bird meats are illegal.

Tony Chu is a detective with a special gift: he is a cibopath, meaning that he can taste something and get a psychic connection to it. Oftentimes, that means he gets an idea of what killed it, or what was happening. From there, the series goes in many odd directions.

Here are some reasons that Chew would work as a television series:

It has a premise that is sustainable. Chu as a detective means that it could pretty easily fall in line with the procedural world of cop shows today. It also would lend itself to the long term arc of a villain in a season. This format is something that isn’t foreign to television and that they know how to do.

But it lends itself to some variety as well. The “food” crimes possibilities are amazing. Not to mention the guest star potential of some chefs and celebrity cooks! Plus, what a great webisode possibility as chefs make the real food that is forbidden in Chu’s world.

The series Chew has a rich tapestry of characters. To make a show like this sustainable, you need the ability to introduce and revisit a large variety of characters over time. The risk of a new show is getting so focused on one or two characters that you lose the larger world. Good writers would recognize the world that Layman and Guillory have created and let that world breathe in a television series. 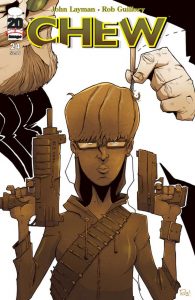 You could do the show as a commentary on other police procedurals. It is a very tired and worn out trope and part of what makes the Chew comic work is that is serves in some part as a commentary on that world. You could definitely ratchet that up and deliver some comedic beats, in part because the general idea of chicken being banned makes it comedic in itself.

Food related powers. Cibopaths aren’t the only ones with food related powers so again, it is an expansive premise that branches outward from the first first arc. That is key to creating a viable, long term show.

The drawbacks include the difficult balance. Yes, it is a comedic premise but it also needs to be a serious cop show at times. You need the right kind of show leader to make that work and sustain. It isn’t a dramedy per se but it needs to walk that line. And potentially, it could feel like a gimmick show that runs out quickly if there isn’t some intentionality on how the show is done from the beginning. 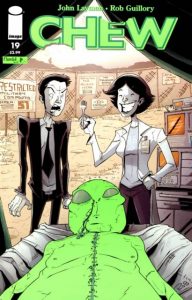 So, Chew just might be a great television show. In fact, at one point, Showtime was developing it before deciding to pass and since 2014 there have been rumors of a Chew animated show, which could be great. But live action could be just as good as we follow food detective Tony Chu!

Until it comes to TV, you can get the comics collected in some nice trades. It’s a great read. Get it here.