Earlier this year, Wizards of the Coast announced that there were creating an official Dungeons and Dragons digital toolset with the help of Curse, a software company that has long been associated with community supported platforms. (Curse was bought by Twitch in August 2016.)

Nerds everywhere both held their breath and said their prayers to the benevolent Forgotten Realms god of their choice: could DnDBeyond be what we had hoped for? Could we truly get a useful, official, affordable digital tool that would allow us to access the information we needed, when we needed it, that is available across all platforms? 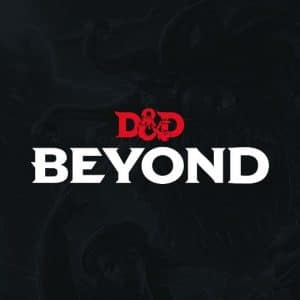 To be clear, there are still a lot of questions that have to be answered in the long term about DnDBeyond before anyone can reasonably fully endorse it. The largest issue is what will the cost be for the service long term.

Right now, while everything is in beta, it has been free and while I’d love to think that Wizards of the Coast is going to make a product like this available for free, it isn’t happening. There have been theories about what this service will cost long term but they are all speculation.

Without that being answered, how useful and valuable is DnDBeyond now and how could it be better moving forward? 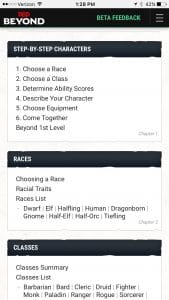 First off, the service right now is officially in Beta Phase 1. And what that level has currently is pretty significant. There is a compendium of general D&D knowledge, a spell listing and a Monster compendium.

The general compendium of D&D knowledge is a pretty decent tool. It basically operates as a digital basic player’s guide. All the general D&D information is in there and you can get a pretty decent feel for the game based on reading it.

If someone was new to a table that I was DMing, DnDBeyond is an excellent resource to point them to as a primer of the game. It is searchable, clickable, and functional. It isn’t the most beautiful part of the service but it works and isn’t bad. 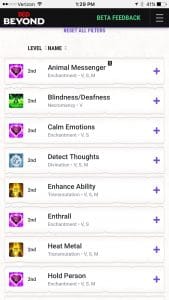 Second, there is the spell listing section. In Phase 1, this is the best part of DnDBeyond. The whole of magic is included, which alone is significant, but an added plus is that it is searchable in a variety of ways.

All of that to say, if I am trying to figure out what a 2nd level spell slot for a cleric should be that does not have a vocal component, DnDBeyond makes that easily achievable. That level of knowledge at a quick search helps make gameplay smooth and quick. For that alone, it is worth getting a Beta subscription and trying out.

Third, there is a Monster compendium. The best part of this information is also the searchability. You can quickly sort by monster type, its challenge rating, its size and its environments. If you are building out your own adventures, this resource is fantastically helpful. As a DM, you can quickly look at all sea creatures that are within the environment of your game’s location and within the right challenge level of difficulty. Again, it allows DMs and players alike to quickly access the information that they need in preparation or during game play.

All of which to say, without a doubt, this is a great resource as a free beta. It is easy to use, it looks pretty, it works on all platforms, and, most importantly, it is setting up some future things.

The next phase of the service is said to be centered around character creation and you can see that some of the work they have done in the compendium is going to pay off when they add this functionality.

Likewise, phase 3 is said to be centered on helping you create your own campaigns and other parts. Imagine that you could simply take an iPad to your gaming table and have everything you need. There are similar things like HeroLab available now but they aren’t official, they don’t look as good, and they always come up short on that last step. (For instance, when I have an 5th level cleric and go to cast cure light wounds, it should be smart enough to ask me at what level and mark it off my “sheet” as used when I cast it at which ever level I choose.)

Will it be worth it over the long haul and when it becomes a paid service? It all depends on how smart Wizards is on pricing it, both short and long term. Some people have thrown out the idea that it might be a $15 a month service, which would only work if a subscriber had access to all the information right away. When a new book comes out, the items should show up immediately.

If the cost isn’t subscription based and is one time $30 fee and then I can pay $10 to add the information for each book when it comes out, I think there is a viable case that DnD Beyond might be worth it. But all of that is guess work, as there has been no announcement of its cost and price model.

But for now, DnD Beyond is a helpful tool to players and DMs alike in its free phase one beta state.

Mythic Odysseys of Theros: Who is the Latest D&D Book For?