By Clave Jones On May 25, 2017 Last updated Nov 20, 2018
4 TwitterReddIt4PinterestFacebookEmailPrint

Oh, you play D&D? Son, I have twenty sided dice older than you. I also have D&D boxed sets that are so old you may not have even heard of them. I want to introduce you to one: Al-Qadim.

Al-Qadim was filled with scimitars, sultans, and sand. It was designed for nerds who were fans of The Mummy as much as they were fans of Lord of the Rings. Al-Qadim was D&D meets Sinbad, Arabian Nights, Aladdin, Lawrence of Arabia, Ali Baba and the Forty Thieves, and Indiana Jones. 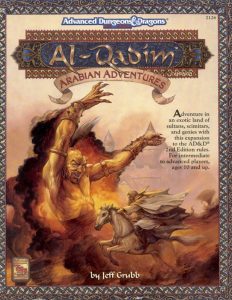 During the early 90s, D&D game designers were actively looking across the Earth’s cultures, ethnicities, and histories for inspiration. This period brought an Oriental Adventures source book and adventures that was inspired by Asian culture and folklore, as well as the Maztica boxed set that pulled from the rich heritage of the Mayan and Aztec empires.

Then there was the high adventure of Al-Qadim. It mashed up elements from the historical Arabian Empire with that of the oft-inaccurate, but nearly always fun and entertaining Hollywood film catalog. Then slathered over that were the wonderful Arabian legends that featured genies, magicians, and ghuls.

Written by Jeff Grubb, Al-Qadim was able to chronicle a different far-off land of the Forgotten Realms, the popular setting for Dungeons and Dragons. While the traditional fantasy styling of elves and dwarves were centered around the Forgotten Realms’s Sword Coast and Moonsea regions, Al-Qadim offered roleplayers an Arabian flavor by giving them an opportunity to visit the imaginary Zakhara, the Land of Fate. 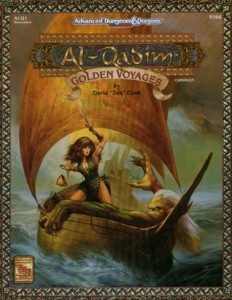 Roleplayers had different motivations in Zakhara, the land of the Al-Qadim setting. Zakhara lacked the racial segregation found in most roleplaying settings, where orcs, elves, humans, and others butt heads over racial tendencies and territories. Instead, it was lifestyle—not race—that tended to separate Zakharans and issues of fate and faith were the motivations for roleplayers.

Honor, purity, family, and hospitality drove adventuring in Al-Qadim. Instead of a dungeon crawl, players might find themselves immersed in a blood feud or on a pious quest for the sake of a diety for example. Above all is the belief in Fate, thought by many Zakharans as the goddess of the gods or the ruler of genies.

The ruleset used “kits” to differentiate player characters. When you created a character you had to take a kit, most of which were unique to characters who were native Zakharans. If a player wanted to stick to traditional D&D classes they were limited to four kits designated for foreigners to Zakhara:

Then to illustrate just how different things were in Zakhara, natives got all the cool toys. These were thematic characters such as askars, corsairs, desert riders, beggar-thieves, moralists, and mystics. All were really cool and dripping with theme and adventure.

Then there were genies of course. Genies were all over the place, trying to trick people in order to gain power or simply to amuse themselves. Many of the genies weren’t all bad, but good luck understanding their motivations. Mainly, you just knew that in the setting of Al-Qadim, you’d just have to deal with genies and that added an extra level of intrigue that is often missing from most RPG products. 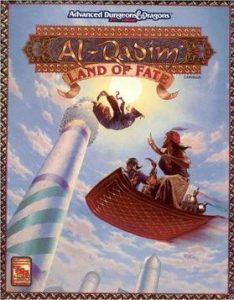 Al-Qadim is still remembered fondly to this day. There was so much creativity that went into Al-Qadim, that elements of it still pop up here and there in roleplaying products. Jeff Grubb and writing partner Andria Hayday really brought a wonderful sense of experimentation and excitement to this little corner of D&D.

I was college-age when Al-Qadim was released, so my only genie wish was to meet as many girls as possible. Still, I remembering flipping through the boxed set and being mesmerized by it. So even though I didn’t get in many plays in the setting, I still remember it fondly.

Products that are so steeped in the histories of a particular ethnicity and culture aren’t received the same way that they were decades ago, so I’m skeptical if a relaunch of Al-Qadim is even on the radar for a modern D&D 5e product.

But it’s fun to look back. In addition to the hardcover source book, there was a wonderful Al-Qadim boxed set. What was originally supposed to be a simple one-year product launch proved to be so successful that the product was extended by a couple years and further supported with some adventure booklets.

If you ever want to flip through a D&D classic like Al-Qadim, you can visit Noble Knight Games. They specialize in out-of-print goodness.