By Michael Adkins On May 10, 2017 Last updated Jan 11, 2021
Share TwitterReddItPinterestFacebookEmailPrint

About a month ago, SlashFilm.com posted an article suggesting that Hollywood take note of a series of books three decades old and twenty-two titles strong. Collectively referred to as the Redwall series, these young-adult/preteen adventures authored by the late Brian Jacques feature woodland creatures invariably steeped in deadly battles of good versus evil.

Listen, we all know Hollywood moves slower than a snail in amber, that not every shiny franchise they set their eyes upon will actually get past the pitch stage, and that even when they do there are no guarantees protecting the original material’s integrity from Michael Bay.

(OH MY GOSH I hadn’t thought about Bay getting his pyrotechnic hands on Redwall until typing that sentence out and now I’m worried that there’s a universe in which that is the case. Those poor unfortunate souls.)

So before Redwall gets picked up for cinematic production (for good or for bad), I suggest you go ahead and dive in! Twenty-two books sounds like a lot (it is) and they can be honestly faulted for being a bit formulaic (they are), but gosh darn it they’re fun!

If you’ve got a young reader in your house–say, between 10 and 13–these make for a safe next step in content after series like The Magic Treehouse and Goosebumps and before series like The Hunger Games and Harry Potter.

It depicts violence and death, but not terribly descriptively so and not against human beings.  These two factors place the series in that middle gradation–allowing your kids to experience some more mature content, but not too much, too fast.

Structurally speaking the books have short, fast-paced chapters which will give your kids a heightened feeling of advancement (2-3 turns of a page and they’re on to the next chapter!) and they don’t jump around very much in any given chapter (i.e. the individual chapters don’t tend to shift between locales and plot lines) which makes the story easy to keep track of.

Additionally: While Jacques might drop a vocabulary word or two on the odd occasion, he tends to keep things really, really simple. An adult can breeze through any of the ~350 page books in an afternoon with ease, and preteens won’t feel like they’re reading above their level.

The woodland creatures that comprise the casts of the various books–both the good guys and the bad guys–are given unique voices, traits, and quirks. While I personally find the moles’ speech mannerisms tedious, I can’t deny that it adds a respectable flavor to the read. On the other hand, you’ve got the hares who I can’t help but read having an English accent and whose every word consequently brightens a page! 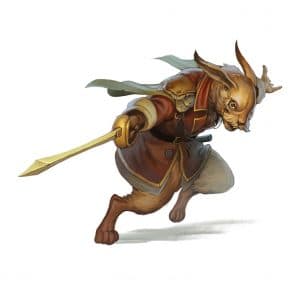 You’ll be introduced to warrior mice with swords, fearsome squirrel archers, courageous otters armed with slings and stones, proud badgers, daring hares, and the lively younguns inspired by their examples.

Each side is depicted awfully specifically, which will feel like a downside to most adult readers.  Any given character’s species pretty much determines its alignment and level of civility with few-to-no surprises. But in the case of young readers, I’d argue that is an aid more than it is an obstacle; not least because they’re still sorting out good from bad and nuance and ambiguity isn’t going to help them sort that out, in my opinion. Save that for later (looking at you, Snape!).

You’ll see the underdogs win the day–but not without loss. You’ll see villains win battles–but not the war. And I love Jacques’ balance here. It is very “Whedon,” who said,

I think it’s disingenuous to say we’re going to fight this great battle, but there’s not going to be any loss.

Lastly, your kids will bear witness to the long and fabled history of Mossflower Woods, Redwall, Martin the Warrior, and other locations and names. If you read the books in the order they were published, you’ll jump back and forth between what you might label as the present and what is undoubtedly the past that shaped it. In doing so, Jacques literally fills the world with legend and prophecy and history and importance beyond each book’s specific and finite good versus evil struggle.

Your kids can literally grow up with and in Redwall. Beat the box office by introducing them to a good ole paperback! Heck, give them a read your adult self if you haven’t. I find them to be welcome breaks between my usual, more “grown up” reads.

Bonus:  If your kids love Redwall, check out the Mice and Mystics board game or the Mouse Guard comics!

The Drift Episode 2: Races and Classes in Starfinder