The party continues to hold their breath as their retreat with the Prayer of Rosag is held up by a large crustacean foe.  They’re on it’s home turf; hindered by the water in more ways than one.  How will they fare against this guardian of the temple?  Find out in Episode 118 – Lake Flaccid.

With the prayer of Rosag in hand, the party is overwhelmed by a vicious crustacean abomination. 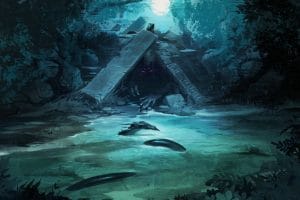 The Drift Episode 10: Starfinder has launched!