Are There Heroes and Villains, or Just Agendas?

[spoken in voice of Dragon Ball Z narrator] Last time on Anatomy of a Hero, we learned that with great power, there does indeed follow some responsibility. If someone can intervene, stand up, or make a difference but chooses not to, they might not be a villain, but they’re certainly no hero.

Today we’ll discuss the following quote from S1E7 of Netflix’s Daredevil (by the way, you can drop the DBZ narrator voice now):

There are no heroes. No villains. Just people with different agendas.

What Did Ben Urich Mean?

This quote caused me to raise my own People’s Eyebrow. I mean, my conspiratorial side thinks that Marvel shoehorned that quote in there as a passive aggressive way of defending all of the Civil War stuff, but that is neither here nor there.

What exactly did Ben Urich mean here? I wish the show provided some answers in the dialogue that follows, but instead he talks about spaghetti (no joke). 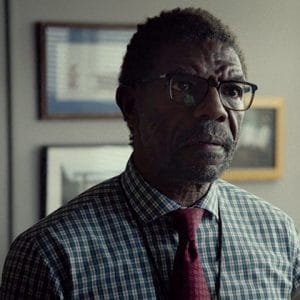 To be honest: I’d let the first interpretation slide at the point in the Marvel Netflix Universe narrative that this quote is spoken. Daredevil S1 came first, so I guess its easy to assume they hadn’t yet heard rumors of a bulletproof man in Harlem or a woman who could halt a car with a single hand elsewhere in the same New York City.

But let’s talk about the second one…

The second option is very curious. At this point in the show, Ben Urich remains unconvinced that Daredevil is a hero, even though he saved Karen Page. His argument is basically, “Yeah, but he might have been there to hurt someone else.”

So maybe Ben is a pacifist and believes all violence, regardless of the ends, is an intolerable means.  He doesn’t put up much of a fight when Fisk pays him a particularly violent visit later on in the series, so that jives.

Or perhaps he’s a moral nihilist? That makes significantly less sense given his penchant for exposés on the evils of NYC. He seems to be able to call an evil an evil; unabashedly so, even, and at risk to himself.

But wait…doesn’t that kinda make Ben a hero?!

Campbell to the Rescue! 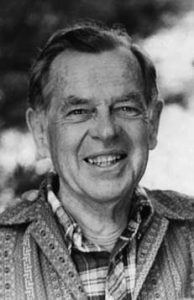 In his book The Power of Myth, Joseph Campbell places some significant emphasis on the transformation a hero undergoes during which he moves from selfish to selfless; typically through a series of obstacles, trials, and/or revelations.

He even goes so far as to provide an interesting definition for hero:

The moral objective is that of saving a people, or saving a person, or supporting an idea.  A hero sacrifices himself for something – that’s the morality of it.

Think about Wilson Fisk in Daredevil Season 1. He’s only a “hero” by merit of the “saving people” aspect of this working definition of one person: Vanessa, his lady friend. When stuff gets hairy, he ships her off. 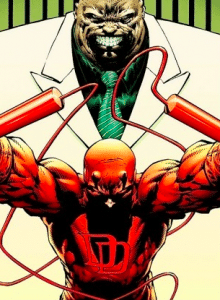 Sure, he puts on a bit of a show at a news conference at one point about saving Hell’s Kitchen, but by the benefit of dramatic irony, we know better.

Daredevil, on the other hand, has a string of rescues and it costs him significantly. His body is broken. His life falls apart.

And here’s the kicker: He accepts it. He shoulders the costs 100% even when his dream job law firm disintegrates and his best friend walks out of his life. Campbell, I believe, would argue that its certainly not Murdock’s crazy senses that make him a hero (we covered that in the last post).

It’s not even the punches he throws. It might well be the punches he takes that makes him so; both physical (to the body) and metaphorical (to his life) on behalf of what he perceived to be the pursuit and attainment of justice in Hell’s Kitchen.

By this metric, Ben Urich is indeed a hero – even though he might not believe himself to be nor ever call himself or anyone else one.

The same goes for Matt Murdock.

Now for the Punchline

I want to close these posts by bringing our discussions of fictional characters into the real world briefly and thought-provokingly.

“Sacrifice,” briefly defined, is the relinquishment of something owned in the pursuit of something else regarded as more valuable or worthy. It can be resources (again, as we talked about in the last post), or it might be the self, itself.

And once more we find that by these definitions, heroes can (and do) exist outside the pulp pages, the big budgets, and the fantasy worlds. We need not relegate them to fiction.

And to be fair: We don’t when they arise. I think today specifically about Heather Heyer as I write this.

My question is: Do they arise frequently enough, or are too many of us heroes/heroines in potentia stuck in the selfish phase; having, perhaps, not undergone the trials and revelations requisite to spur ourselves on to the selflessness the world needs?

Nerds on Earth Presents Hall Fights, a Podcast about Marvel on Netflix

Does great power really have to bring great responsibility?