Not all comic books are about superpowered individuals in spandex. In fact, many of the very best comics aren’t superhero comics at all.

From crime noir to science fiction tales to civil rights anthologies, comics cover the gamut. There is even a comic about climate change.

The Massive is a 30 issue comic written by Brian Wood that follows the story of the crew of the Ninth Wave’s Kapital, a ship dedicated to nonviolently protesting the destruction of earth’s natural resources. Think Greenpeace’s crusade to save the whales and you get the general idea.

The great gods Anu, Enlil, Ninurta, Ennugi, and Ea were sworn to secrecy about their plan to cause the flood. – The Epic of Gilgamesh 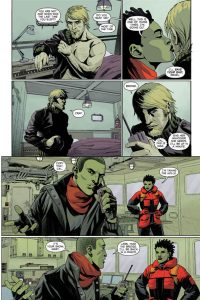 Characters: While a comic about climate change seems like ho-hum fare, Brian Wood is masterful. He pens a very character driven story.

Below the thunders of the upper deep;
Far far beneath in the abysmal sea,
His ancient, dreamless, uninvaded sleep
The Kraken sleepeth – Lord Alfred Tennyson

Science: But beyond the excellent character-driven story, Brian Wood meticulously researched The Massive. To be clear, this isn’t a wholly science driven story. There are elements of the mystical and supernatural in book.

And all of the above is in the context of a narrative driven story. This is no science text book bore. The Massive is a comic for big brains and you’ll feel satisfied having read it.

The Lord saw how great the wickedness of the human race had become on the earth, and that every inclination of the thoughts of the human heart was only evil all the time. The Lord regretted that he had made human beings on the earth, and his heart was deeply troubled. So the Lord said, “I will wipe from the face of the earth the human race I have created—and with them the animals, the birds and the creatures that move along the ground—for I regret that I have made them.” But Noah found favor in the eyes of the Lord. – Genesis 6: 5-8 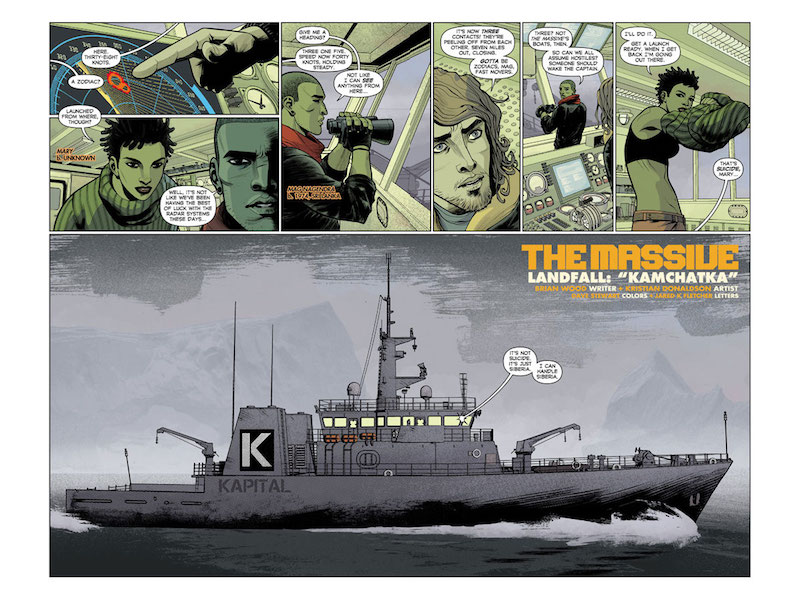 Setting: The Massive is a jaunt around the globe. Cultures and geopolitics are at the center of the story. Brian Wood pens wonderful scenes, but the artwork in the book really makes it come alive.

The Massive takes you from the Horn of Africa into a flooded Manhattan, and each setting is vivid. Again, this is a smart comic and you’ll appreciate locales and cultures presented in the book. But make no mistake, it’s no simple travel guide. It’s a fun tale as well.

See the world in green and blue
See China right in front of you
See the canyons broken by cloud
See the tuna fleets clearing the sea out
See the Bedouin fires at night
See the oil fields at first light
And see the bird with a leaf in her mouth
After the flood all the colors came out – U2: Beautiful Day

The Massive is a comic that fully illustrates the power and potential in comic book storytelling. It is a meticulously researched look at a future world-end scenario, it is thoughtful and challenging, it is a very character-driven story, and it weaves a rippin’ good yarn.

It was published by Dark Horse comics as 30 floppies, but I was able to pick up the 5 trade volumes for a nice used price. Give the first trade a try to see if it hooks you. I guarantee it will.

Nerds on Earth Presents Hall Fights, a Podcast about Marvel on Netflix

The Dark Horse Star Wars Comics are Legit. You Owe it to Yourself to Give them a…