What I’ve done below is whip up an encounter with a fun and interesting mechanic variation that might force players into a different tactical and strategic approach. Insert it into a homebrew campaign for a quick change of pace and a bit of fun flavor!

The set up for this one is that your heroes get word of a strange happening at a local town. The water sources they’ve relied upon for years have fouled. It’s undrinkable. And to add to the mystery, every party they’ve sent ranging to find a new source of potable water has not returned.

While investigating the town, someone runs up and reports that a handful of people just slaughtered and stole a cow right out of his pasture! And if his eyes weren’t deceiving him…he’d swear that they were locals!

After some survival/perception checks to follow a trail of blood that leads into a cave system, the party finds the missing commoners (all of them) near the bank of an underground lake; its surface disturbed by a giant tentacle that is dragging the slaughtered cow into its depths. 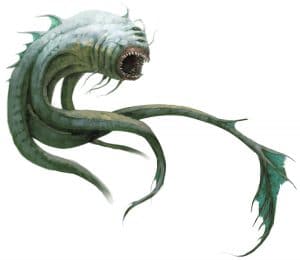 The commoners’ eyes are clouded over and they’re extremely hostile and unreasoning. They attack! What will the party do? Will they deduce they’re under some sort of spell? If not, will they kill them all? If so, how will they deal with the dozen hostiles?

If the party manages to release all of the commoners from the Aboleth’s control or kills them, the creature itself rises from the depths– complete with both Legendary and Lair actions.  And buddy…the Aboleth has some really interesting mechanics!

If it can sucker the PCs towards the lake’s edge, it can use the water to pull them into the lake (Lair Action). Any creature then hit by one of its melee attacks has to make a DC 14 Con save or it is diseased for 1d4 hours and can only breathe underwater. Talk about shaking up some combat!

Not to mention that it can attempt to enslave a PC, which also opens up the possibility for some psychic attacks.

Here again…technically the CR should be 16 or 17, but the commoners will not be much of a challenge for 4 10th level PCs and the Aboleth stays completely out of the fight until all of them are dealt with one way (snapped out of his charm) or another (dead), so I’m sticking to the CR 10.

Guess what? You can even submit your own encounter idea! Simply click here.

The Secret to a Starfinder Vesk Mystic? Eat a Bowl of Oatmeal.

Zed-Words: A D&D 5e Encounter Idea to Spice Up Your Game